Buddy Rice (born January 31, 1976) is an American former race car driver. He is best known for winning the 2004 Indianapolis 500 while driving for Rahal Letterman Racing, and the 2009 24 Hours of Daytona for Brumos Racing.

Born in Phoenix, Arizona, Buddy Rice is the son of a former drag racer. Rice's grandfather was from Indianapolis and passed on his interest in racing to Rice's father. Rice saw his first race when he was six years old. He started racing in go-karts when he was 11. Rice played baseball in high school in Phoenix, Arizona, and attracted the attention of college and professional scouts. However, both Rice and his father decided he would pursue a career in racing instead.[1][2]

Rice's professional career began in 1996, when he drove in one U.S. F2000 event; he finished eighth after starting second. He also drove in the Dodge Shelby Pro Series, winning from the pole at Las Vegas, Nevada.

In 1997, Rice drove in F2000 for Lynx Racing/DSTP Motorsports, finishing fourth in points and winning at Phoenix. He also won the 1997 Valvoline Team USA Scholarship, where he represented the United States in Europe’s Nations Cup.

In August 2002, Rice had his first race in the IRL for Red Bull Cheever Racing at Michigan International Speedway. Hired initially to replace crash-prone Tomas Scheckter, team owner Eddie Cheever discovered that Scheckter's contract was more iron-clad than first thought. Team Cheever then ran three entries (joined by their team owner), and the best crew and parts were given to Rice.[citation needed] Rice lost the race by inches to Scheckter, but made a mark in the series. He competed in the final five races of the IRL IndyCar Series season with Red Bull Cheever Racing, scoring four top-10 finishes and two top-five finishes in five starts.

In 2003, Rice competed in 13 of 16 races for Red Bull Cheever Racing but was replaced by the more experienced Alex Barron.

In November 2003, he dabbled with a one-off drive in a NASCAR Craftsman Truck Series race at the Homestead circuit before being called by Bobby Rahal to drive the No. 15 Argent Mortgage Honda when Kenny Bräck was injured in a late-race crash at Texas Motor Speedway in 2003. 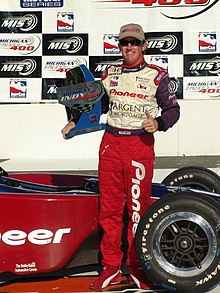 In 2004, Rice started on pole and won a rain-shortened Indianapolis 500, his first Indycar race victory. He finished 3rd in the IRL championship that year, earning five poles, three wins and leading 342 laps. After his Indy 500 win, his sponsors told him that they would buy him any car he wanted, he chose a 1949 Mercury Eight. 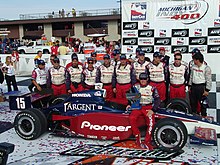 Rice driving at the Milwaukee Mile in 2007

For 2005 he and Vítor Meira were joined by Danica Patrick. However, Rice was injured in a crash at Indianapolis during practice, and was not cleared to race. In an ironic twist, Bräck then substituted for Rice.

The 2006 season began tragically for Rice at the season-opening race at Homestead-Miami Speedway when teammate Paul Dana of Rahal Letterman Racing team was killed in the final practice session. Rice and his other teammate Danica Patrick immediately withdrew from the race. Rice started his 2006 season in the following race at St. Petersburg, Florida. His Indianapolis 500 race ended early in a crash with Hélio Castroneves. After the IRL season ended, he raced in the Champ Car World Series race at Autodromo Hermanos Rodriguez for Forsythe Racing and finished 10th.

Buddy Rice recovers from a tough qualification attempt prior to the 2007 Indianapolis 500.

For 2007, Rice joined Sarah Fisher at Dreyer & Reinbold Racing. He captured 3 top-five finishes in the first half of the season and finished 9th in points, his best result since 2004. He was retained by the team for the 2008 IndyCar season, the high point of which came with a 4th-place finish at Watkins Glen. He ultimately finished 16th in points.

He did not participate in the 2009 IndyCar Series season after being released from Dreyer & Reinbold Racing at the end of the 2008 season. Further, his long-standing partnership with Red Bull also expired and was not renewed.[citation needed]

He raced for Panther Racing in the 2011 Indianapolis 500 as a teammate to J. R. Hildebrand driving the No. 44 Honda Dallara.[3]

Starting the 2007-08 season, Rice signed to drive for A1 Team USA in the A1 Grand Prix international racing series.[4] He drove in the first two rounds of the season with a best finish of 13th in the Zandvoort feature race before ceding the seat to Jonathan Summerton for the remainder of the season.

Rice competed in a few Grand-Am Rolex Sports Car Series in the early 2000s. In his debut in 2000, he finished second at Watkins Glen on a TRP Lola Nissan. In 2002 he resulted second at the 6 Hours of Watkins Glen and fourth in Homestead and Phoenix, driving a Miracle Riley & Scott Ford.

In 2009, Rice won the 24 Hours of Daytona on a Brumos Racing Riley Porsche. He spent the second half of the season as teammate of Antonio García in a Spirit of Daytona Coyote Porsche, where he finished 4th at Barber in his only top 10.

Rice raced full-time for Spirit of Daytona in the 2010 Rolex Sports Car Series, joining again García. He helped Spirit of Daytona get the first podium finish for the team at the Six Hours of the Glen in 2010, collecting a third place. He also resulted 5th in three races and ended the season in 11th place.

His last Grand-Am race was the 2011 24 Hours of Daytona, where he finished 9th in an Action Express Racing Riley Porsche.

In his free time, Rice collects and restores classic cars. He has a child, Mina, was born on April 9, 2008.