The CTC-2 chassis of an RCA CT-100 television

A chassis (US: /ˈtʃæsi/,[1] UK: /ˈʃæsi/;[2] plural chassis /-iz/ from French châssis [ʃɑsi]) is the load-bearing framework of an artificial object, which structurally supports the object in its construction and function. An example of a chassis is a vehicle frame, the underpart of a motor vehicle, on which the body is mounted; if the running gear such as wheels and transmission, and sometimes even the driver's seat, are included, then the assembly is described as a rolling chassis. 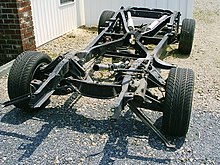 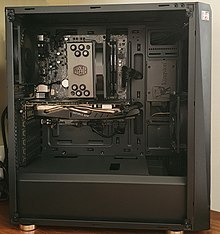 In the case of vehicles, the term rolling chassis means the frame plus the "running gear" like engine, transmission, drive shaft, differential and suspension. An underbody (sometimes referred to as "coachwork"), which is usually not necessary for integrity of the structure, is built on the chassis to complete the vehicle.

For commercial vehicles, a rolling chassis consists of an assembly of all the essential parts of a truck without the body to be ready for operation on the road.[3] A car chassis will be different from one for commercial vehicles because of the heavier loads and constant work use.[4] Commercial vehicle manufacturers sell "chassis only", "cowl and chassis", as well as "chassis cab" versions that can be outfitted with specialized bodies. These include motor homes, fire engines, ambulances, box trucks, etc.

In particular applications, such as school buses, a government agency like National Highway Traffic Safety Administration (NHTSA) in the U.S. defines the design standards of chassis and body conversions.[5]

An armoured fighting vehicle's hull[6] serves as the chassis and comprises the bottom part of the AFV that includes the tracks, engine, driver's seat, and crew compartment. This describes the lower hull, although common usage might include the upper hull to mean the AFV without the turret. The hull serves as a basis for platforms on tanks, armoured personnel carriers, combat engineering vehicles, etc.

In the intermodal trucking industry, a chassis is a type of semi-trailer onto which a cargo container can be mounted for road transport.

In an electronic device (such as a computer), the chassis consists of a frame or other internal supporting structure on which the circuit boards and other electronics are mounted.[7]

In some designs, such as older ENIAC sets, the chassis is mounted inside a heavy, rigid cabinet, while in other designs such as modern computer cases, lightweight covers or panels are attached to the chassis.

The combination of chassis and outer covering is sometimes called an enclosure.

The M2010 Enhanced Sniper Rifle, based on the bolt-action Remington 700 design but bedded inside an accurizing chassis.
See also: Rifle bedding

In firearms, the chassis is a bedding frame on long guns such as rifles to replace the traditionally wooden stock, for the purpose of better accurizing the gun. The chassis is usually made from hard metallic material such as aluminium alloy (and less frequently stainless steel, titanium alloy or recently magnesium alloy) due to metals having superior stiffness and compressive strength compared with wood or synthetic polymer, which are commonly used in conventional rifle stocks.

The chassis essentially functions as a more extensive pillar bedding, providing a metal-on-metal bearing surface that has reduced shifting potential under the stress of recoil. A barreled action bedded into a metal chassis would theoretically operate more consistently during repeated firing, resulting in better precision. With the increasing availability of CNC machining, chassis have become more affordable and sophisticated, and gained increasing popularity as it can also be expanded to accommodate customizable "furnitures" (buttstock, pistol grip, etc.) and rail interface systems that provide mounting points for various accessories.