The venue hosted the Champ Car World Series Grand Prix of Montreal from 2002 to 2006.

Formula One at Montréal

The Canadian Grand Prix was first held at the circuit in 1978, where hometown hero Gilles Villeneuve (1950–1982) won for Scuderia Ferrari. The Grand Prix quickly became a mainstay of the Formula One calendar, with the race taking place in Montreal for the next thirty years. Once held in late September, the event was moved to its present location on the calendar of mid-June in 1982, so as to provide a warmer, more pleasant race weekend. Many great races have occurred at the track over the years, cementing its reputation as a truly unpredictable venue. However, the race was dropped from the 2009 Formula One calendar and replaced with the inaugural Abu Dhabi Grand Prix, after running over two decades uninterrupted. On November 27, 2009, Quebec's officials and Canadian Grand Prix organizers announced a settlement with Formula One Administration and signed a new five-year contract spanning the 2010–2014 seasons.[1][2]

Île Notre-Dame Circuit in the middle of the St. Lawrence river (1978)

Originally named the Île Notre-Dame Circuit,[4] the circuit was built and finished in 1978. In what has proven to be the venue's main event over the decades, the FIA Formula One Canadian Grand Prix had been part of the Formula One World Championship for 10 years, and it was previously held at Mosport Park near Toronto on 8 occasions and in 1968 and 1970, the Mont-Tremblant circuit in Quebec. With safety concerns with Mosport blighting the 1977 event, it was decided to move the race to the new circuit in Montréal. In 1982, it was renamed in honour of Canadian Formula One driver Gilles Villeneuve, father of Jacques Villeneuve, following his death earlier in the year.[5] The circuit is located in a part of the city of Montréal known as Parc Jean-Drapeau. The park is named after the mayor of Montréal who was responsible for the organization of Expo 67.

The race circuit is on Notre Dame Island, a man-made island in the St. Lawrence River most of which was originally built up for the Expo in 1967. Saint Helen's Island to the northwest was artificially enlarged for the Expo '67 fairgrounds and a prominent remnant of the fair, the Biosphere can be regularly seen during television coverage of racing events. Almost half of the track – from the hairpin turn until after the pit area – runs alongside the Olympic Basin, a huge rectangular basin which was created for the rowing and canoeing events of Montréal's 1976 Summer Olympics.

Over the winter of 2018-19 the paddock was torn down and completely rebuilt before the Grand Prix. The old paddock had been in use since 1988.

Satellite picture of the circuit, taken in May 2018

Barriers run close to the circuit and many experienced drivers have been caught out by them. A particularly famous part of the circuit is the wall on the outside of the exit of the final chicane before the start/finish straight. In 1999 the wall, which bears the name Bienvenue au Québec ("Welcome to Quebec") giving it the nickname "Mur du Québec" (Quebec Wall), ended the race of three Formula One World Champions, Damon Hill, Michael Schumacher and Jacques Villeneuve along with FIA GT champion Ricardo Zonta. Since then the wall has been nicknamed "The Wall of Champions". In subsequent years, 2009 world champion Jenson Button (2005) and four time World Champion Sebastian Vettel (2011, during free practice) also became victims of the wall.

For the first few years of its existence, the track consisted of technical, medium speed chicanes and a relatively low overall lap speed. However, over the years the circuit has transformed into a power track, with straight line speed being very much a priority. Between 1986 and 1988 (with a one-year hiatus occurring in 1987), the pitlane and start-finish straight were relocated from the hairpin to the exit of the fast right-left chicane, which became the final corner. After the fatal crashes of Roland Ratzenberger and Ayrton Senna at Imola earlier in the year, in 1994 a chicane was inserted between the Casino corner and the hairpin to decrease top speed. The 1996 race saw both the chicane and the Casino corner removed and the layout changed; the run from the hairpin at the bottom of the circuit was turned into a straight.

In 2002 the exit of the pitlane was changed to make exiting the pitlane safer for drivers. This also shortened the length of the circuit. 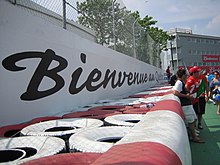 Bienvenue au Québec slogan on the Wall of Champions

Changes made in 2005 to the curbs on the final chicane were controversial amongst drivers in the run-up to the Grand Prix. The curbs were made higher and more difficult for the drivers to see, making it even more challenging.

On June 23, 2006, the Canadian Press reported that the city of Montréal had awarded exclusive rights to stage the two allowed race weekends on the track to Normand Legault, promoter of the Formula One Canadian Grand Prix. The deal was for 2007 to 2011, with an option for 2012 to 2016. Legault decided to replace the Champ Car race with races from the Grand American Road Racing Association's Rolex Series and NASCAR's Nationwide Series, respectively – the latter series' first race north of the Canada-United States border. On August 4, 2007, Kevin Harvick made history by winning the first NASCAR Busch Series (now Xfinity Series) race at Circuit Gilles Villeneuve in what was one of the most controversial NASCAR races ever, as Robby Gordon claimed to have won the race.[6] The NASCAR races have affected the circuit layout. An expansion of the pit lane took place, since a NASCAR pit lane must accommodate a minimum of 43 cars. The 2008 race made history as the first NASCAR race to run on rain tires.

In 2017, due to the higher cornering speeds of the new Formula One cars and the new safety requirements imposed by the FIA, the circuit had additional Tecpro barriers installed, following the removal of older tire barriers by May 2017. With the 2017 technical regulations, experts predicted the F1 cars to be quicker by three to five seconds a lap in June at Montréal. 2017's F1 event also saw a change to the exit of the last chicane (the Wall of Champions) with its angle modified, because the FIA found it was dangerous.

The complex of turns one and two has become known as the Senna 'S'. From a bird's eye view turns one and two together can represent an 'S' shape. Since the pit-exit was redesigned merging into turn two, the 'S' shape is not so evident on first glance.[according to whom?] 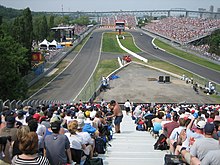 The very fast Pont de la Concorde corner (Turn 8) is after the bridge underpass and is known as a 'quick kink' before Turn 9 and the rush to a passing zone at the Hairpin curve.

Turn 10 at Île Notre-Dame is probably the best example of a 180° hairpin turn design with full wheel lock during F1 competition. The various lines taken entering the hairpin curve can lead to overtaking on the apex, or exit during race competition. Braking too late can see cars offline into the runoff area, and some spinning in front of packed grandstands. Many overtakes can be seen at this location due to engine differences and drivers' skills.

Entering turns 12 & 13 drivers encounter one of the best passing zones, completing the long straight after the hairpin. Many duels have been seen exiting turn 12 with some race cars deciding to cut corner 13 into the run-off, with many going a bit 'too hot' apexing Turn 13 and not exiting intact. Turn 14 is dubbed the "Wall of Champions" after three former Drivers' World Champions found the outside wall in the 1999 race. In Formula 1 races, a car damaged after gracing the Wall of Champions brings out a Safety Car or VSC. The exit barrier is poignantly marked with advertising by Tourisme Québec ("Bonjour Québec"; “Bienvenue au Québec” in previous years) during the F1 event.

As part of Parc Jean-Drapeau, the Circuit is open to visitors, between races, for walking, running, biking, in-line skating, and driving.[7] During the few days of the Grand Prix, Notre Dame Island is one of the noisiest places in Montréal. Other times of the year, it is one of the quietest, being located in the middle of a river, on an island filled with greenery and animals, joggers and cyclists. However, on June 4, 2009, administration of Notre Dame Island has forbidden the access of competitive cyclists to the circuit, justifying this as a security measure to avoid the increasing injuries that occurred between year 2008 and 2009. A total of 27 injuries have been reported. The ban on cyclists has since been lifted due to protests.[citation needed]

The events at Circuit Gilles Villeneuve are listed as:[8]

As the Circuit Gilles Villeneuve serves as host to different racing series, it is possible to directly compare different race series' lap times.

In 2006, the last time Champ Car and F1 ran on the same track, Formula One was 5 to 7 seconds faster than Champ Car. The fastest lap in the Formula One race was 1:15.841 by Kimi Räikkönen, while Sébastien Bourdais's fastest lap was 1:22.325 in the Champ Car race.

The track record for the Rolex Sports Car Series is 1:32.620. The time was set by Scott Pruett driving for Chip Ganassi Racing in the Daytona Prototype class in 2010.

The fastest ever lap around the circuit was set by Sebastian Vettel with a time of 1:10.240 set in qualifying (Q3) for the 2019 Canadian Grand Prix. As this time was set during qualifying, it is not recognized as an official lap record. Lewis Hamilton set the previous lap record with a time of 1:11.459 during qualifying for the 2017 Canadian Grand Prix, earning him pole position. This was Hamilton's 65th pole position which put him level with Ayrton Senna in the F1 history books. After qualifying, Hamilton was awarded a helmet that belonged to his hero as a celebration. This helmet was sent by Senna's family and was awarded to an emotional Hamilton in front of the crowd.

The official race lap records at the Circuit Gilles Villeneuve are listed as: