Circuito de Jerez – Ángel Nieto (formerly known as Circuit of Jerez and Circuito Permanente de Jerez), is a 4.428 km (2.751 mi) racing circuit located close to the city of Jerez de la Frontera, 90 km (56 mi) south of Seville and deep within the sherry-producing region in the south of Spain. The project was led by the Spanish engineer Manuel Medina Lara, based on a preliminary idea from Alessandro Rocci.

The circuit opened on 8 December 1985. During 1986 the circuit hosted the first international motorcycle event in Spain in March and the Formula One Spanish Grand Prix in April. The circuit's relatively remote location hindered significant spectator turnout, although up to 125,000 can be accommodated. Because of this, F1 moved to Barcelona following the 1991 race.

In 1992, the track eliminated four corners to create the long right hander Curva Sito Pons. Due to the hosting of the European Grand Prix in 1994, a new chicane was created (the Senna curve) at the corner where Martin Donnelly had a career-ending accident during qualifying for the 1990 Spanish Grand Prix. Jerez also hosted the 1997 European Grand Prix, which was the championship decider between Michael Schumacher and Jacques Villeneuve, who collided during the race.

During the podium celebrations of the 1997 race, Jerez's Mayor Pedro Pacheco disrupted the podium celebrations by presenting a trophy that was supposed to be presented by a dignitary from Daimler-Benz. This incident resulted in the track being temporarily banned from hosting a Grand Prix.[1] It has not hosted another Grand Prix since, but continued to be used for winter testing until 2015.

During 2005, the track was resurfaced. It was expected that the Champ Car World Series would race there in 2008[2] until the series was cancelled early in the year after merging with the IndyCar Series.

The track during 2010 F1 pre-season testing

On 3 May 2018, the circuit was renamed in honor of the former motorcyclist Ángel Nieto, who died in 2017.

The official race lap records at the Circuito de Jerez are listed as: 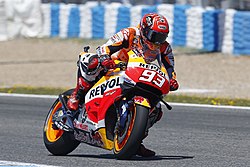 Jerez racetrack is located near the airport where the city's official weather station is located. The site has a hot-summer Mediterranean climate (Köppen Csa with mild and rainy winters coupled with hot summers with pronounced drought. As a result, all of Jerez' Formula One and MotoGP races have been held during shoulder seasons when the air temperatures normally are gentler. The current placement of the MotoGP event in early May has reduced rainfall risk compared to the previous April date, as well as raising the likely average temperature by several degrees. Formula One races used to be held in latter parts of the autumn, but were discontinued after 1997.

Jerez used to be a primary winter testing venue for Formula One and remains so for both MotoGP and the Superbike World Championship, in part due to the favourable temperatures in winter mimicking potential conditions during the race season farther north in Europe even in January.