Crans-Montana is a municipality in the district of Sierre in the canton of Valais, Switzerland. On 1 January 2017 the former municipalities of Chermignon, Mollens, Montana and Randogne merged to form the new municipality of Crans-Montana.[2]

Crans-Montana is also a ski resort that was created through the fusion of the two centres of Crans and Montana and belonged to six municipalities (Chermignon, Icogne, Lens, Mollens, Montana and Randogne), four of which merged to form the municipality of Crans-Montana.

Chermignon is first mentioned in 1228 as Chermenon and Chirminon.[3] It became an independent municipality in 1905 when it separated from Lens.[4]

Mollens is first mentioned about 1250 as Molaen. In 1286 it was mentioned as Moleing. The municipality was formerly known by its German name Molei, however, that name is no longer used.[5]

Montana is first mentioned in 1243 as Montana.[6] In 1905 it separated from Lens to form an independent municipality.[4]

The resort is located in the heart of the Swiss Alps in the French-speaking part of the canton of Valais. It is located on a plateau above Sierre at an elevation of about 1,500 m (4,920 ft) above sea level, allowing a good view over the Valais Alps and Weisshorn in particular. The resort is a fusion of the two centres of Crans and Montana and belongs to 6 municipalities (Chermignon, Icogne, Lens, Mollens, Montana and Randogne).

Crans-Montana is famous in alpine ski racing for the 1987 World Championships and is often on the World Cup schedule, usually for women's speed events.

The area hosts the winter mountain pop rock festival, the Caprices Festival [fr], and a professional golf tournament, the European Tour's Omega European Masters, which takes place each September. The area has also been frequently used for bicycle racing, hosting stage finishes of the Tour de Suisse seven times and of the Tour de Romandie eight times as of 2013. In addition, Crans-Montana also hosted the finish of the 20th stage of the 1984 Tour de France, won by Laurent Fignon, who also took the overall race win that year.[8]

The Golf-Club Crans-sur-Sierre [de] has four courses, one designed by Seve Ballesteros and another named after Jack Nicklaus.[9] 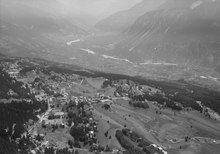 The historical population is given in the following chart:[13] 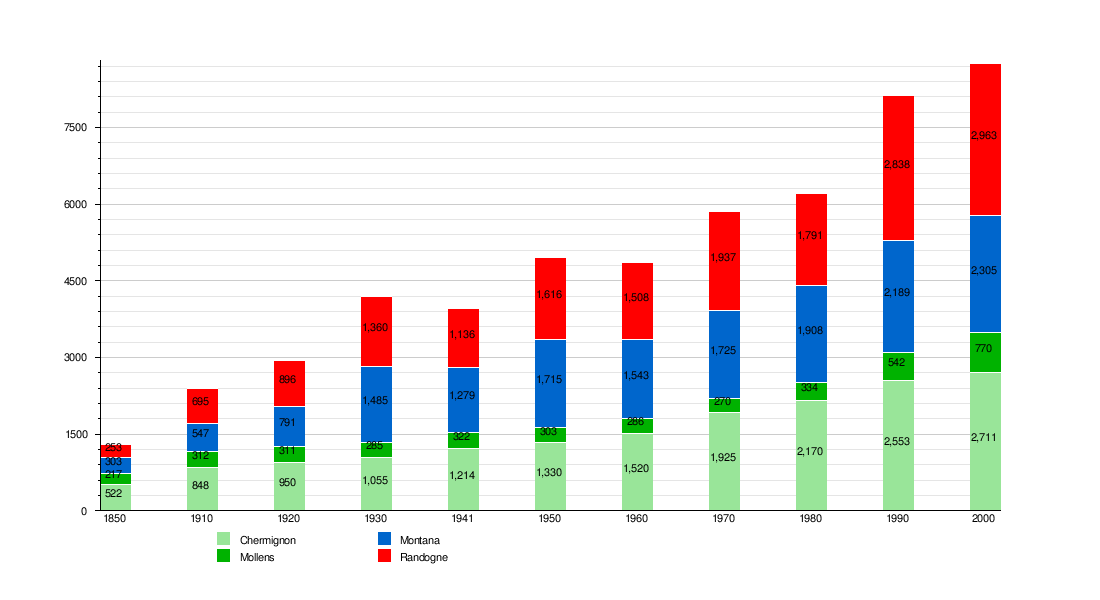 The Roches des Fées and the Hotel Bella Lui are listed as Swiss heritage site of national significance.[14]

Crans Montana has a warm summer humid continental climate, (Dfb) according to the Köppen climate classification. Between 1981 and 2010 Montana had on average 101 days of rain or snow per year and received on average 692 mm (27.2 in) of precipitation. Crans Montana has fairly evenly distributed precipitation throughout the year, as is common in this type of climate. As with other locations in the canton of Valais, annual precipitation rates are quite low due to its location in the rain shadow of some of the tallest mountains in the Alps.[15]