Dijon-Prenois is a 3.801 km (2.362 mi) motor racing circuit located in Prenois, near Dijon, France. The undulating track is noted for its fast, sweeping bends.

Planned in 1967, work commenced in December 1969. The track was part of a plan to make Dijon an automotive centre. It was the brainchild of rugby-player and wrestler François Chambelland (sometimes assumed to be the masked wrestler l'Ange Blanc)[citation needed], and was developed with the aid of racers Jean-Pierre Beltoise and François Cevert, as well as motoring journalist José Rosinski [fr].[2][3] In spite of lack of support from the city government and a chronic lack of funds, the track was declared open on 26 May 1972, with Guy Ligier making the first timed lap around the circuit.[3] The first race, for 2-litre prototypes, was held ten days later. Arturo Merzario was the inaugural winner.[4] 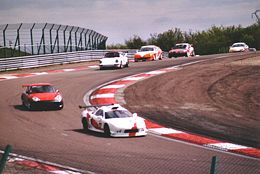 The first F1 race was run in 1974 on the circuit's original 3.289 km (2.044 mi) layout; with the fastest lap times under the one-minute mark, there was a major problem with congested traffic between the race leaders and the back-markers. Therefore, in 1976 an extension was added to lengthen the circuit as well as to reprofile many of its corners before the time F1 could return to Dijon in 1977. The 1979 French Grand Prix featured a memorable battle for second place in the final laps between Gilles Villeneuve's Ferrari and René Arnoux's Renault, which was finally won by Villeneuve. The race itself was won by Jean-Pierre Jabouille in the other Renault - Renault's first, and the first F1 victory for a turbocharged car.[3]

The 1982 Formula One season was not to see the French Grand Prix held at Dijon as that race was held at the Paul Ricard Circuit, located at Le Castellet in southern France. Instead, Dijon held the (as yet) last Swiss Grand Prix, despite being located in France and not Switzerland. This was due to the Swiss Government's ban on motor racing in the wake of the 1955 24 Hours of Le Mans disaster in which 83 people, many of whom were spectators, and the driver Pierre Levegh, died when a car crashed at high speed and vaulted into the pit straight grandstand.[5] 1982 Formula One World Champion Keke Rosberg, driving his Williams-Ford, won his first ever Grand Prix in the 1982 Swiss race, four seconds in front of local favourite Alain Prost driving a factory backed Renault.

The French Grand Prix alternated between Paul Ricard and Dijon, until the last F1 race at Dijon took place in 1984. The race was won by McLaren's Niki Lauda, who won his 3rd and final World Championship that year. The fastest lap of the race was set by Lauda's teammate Alain Prost (1:05.257) at an average speed of 214 km/h (133 mph). Fittingly, the last F1 pole at Dijon was set by a French driver driving a French car, with Patrick Tambay recording a 1:02.200 in his factory Renault RE50 turbo. Tambay led the race for the first 47 laps before being passed by Lauda, the Frenchman eventually finishing 2nd, seven seconds behind the McLaren.

Long-distance racing continued, with a race in the FIA GT Championship held there in 1998 for instance. Although Formula One has not returned to Dijon since 1984, the circuit continues to be used today for minor, mostly local races. These include club level events and motorcycle racing, and truck racing events have been held there since 1988.[2] The track was renovated in 2001, when a go-cart track was added.[1]

The official race lap records at the Circuit de Dijon-Prenois are listed as: