In Ferrari's first official announcement of the car, the 458 was described as the successor to the F430 but arising from an entirely new design, incorporating technologies developed from the company's experience in Formula One.[8]

The body computer system was developed by Magneti Marelli. 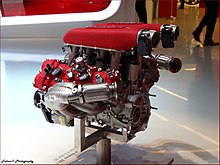 The only transmission available on the 458 is a 7-speed dual-clutch automatic gearbox by Getrag, in a different state of tune shared with the Mercedes-Benz SLS AMG.[8] There is no traditional manual option, making this the first mainstream model to not be offered with a manual transmission.

The car's suspension has double wishbones at the front and a multi-link setup at the rear, coupled with E-Diff and F1-Trac traction control systems, designed to improve the car's cornering and longitudinal acceleration by 32% when compared with its predecessors.[8]

The adaptive magnetorheological dampers were co-developed with BWI Group.

The small aeroelastic winglets generate downforce and, as speed rises, deform to reduce the section of the radiator intake and cut drag

In keeping with Ferrari tradition, the body was designed by Pininfarina under the leadership of Donato Coco, the Ferrari design director during 2009.[13]

The interior design of the Ferrari 458 Italia was done by Bertrand Rapatel (Director of Ferrari Interior Design), a French automobile designer.

The car's exterior styling and features were designed for aerodynamic efficiency, producing downforce of 140 kg (309 lb) at 200 km/h (120 mph).[8] In particular, the front grille features deformable winglets that lower at high speeds, in order to offer reduced drag.[14] The car's interior was designed using input from former Ferrari Formula 1 driver Michael Schumacher; in a layout common to racing cars, the new steering wheel incorporates many controls normally located on the dashboard or on stalks, such as turning signals or high beams.[8]

According to British car magazine Autocar, the 458 Italia's design has drawn inspiration from the Enzo Ferrari and its Millechili concept car.[15] It has been designed to be Ferrari's sportiest V8-engined car, to distinguish itself from the entry level California.[15]

The 458 Spider was introduced at the 2011 Frankfurt Motor Show. This convertible variant of the 458 Italia features an aluminium retractable hardtop which, according to Ferrari, weighs 25 kilograms (55 lb) less than a soft roof such as the one found on the Ferrari F430 Spider, and requires 14 seconds for operation.[16][17] The engine cover has been redesigned to accommodate the retractable roof system. It has the same 0–100 km/h (62 mph) acceleration time as the coupé but has a lower top speed of 320 km/h (199 mph) due to the added weight.

The 458 Speciale was unveiled in 2013 at the Frankfurt Motor Show[18][19] as the high performance variant of the 458 Italia. Distinctions of the Speciale over the standard 458 Italia are the forged wheels, vented bonnet, finned side sills, a taller rear spoiler and redesigned bumpers, which include active aerodynamics designed by Ferrari Styling Centre in cooperation with Pininfarina; front and rear movable flaps balance downforce and cut drag at speed. The engine was revised, with power increased to 605 PS (445 kW; 597 hp) at 9,000 rpm and 540 N⋅m (398 lb⋅ft) of torque at 6,000 rpm.[20] Electronic systems were updated too and side slip angle control (SSC) was introduced to improve car control on the limit. SSC performs instant-to-instant analysis of the car's side-slip, comparing it with the target value and then optimising both torque management (via integration with F1-Trac traction control) and torque distribution between the two wheels (via integration with the E-Diff electronic differential]). The Speciale accelerates from 0 to 100 km/h (62 mph) in 3.0 seconds, 0–200 km/h (120 mph) in 9.1 seconds.[21][22] Ferrari declared a Fiorano test track lap time of 1:23.5, only 0.5 seconds slower than the F12 berlinetta. Lateral acceleration now reaches 1.33 g.[23] Only 3,000 were made.

The 2012 458 Italia China Edition is a limited (20 units) version of the 458 Italia for the Chinese market, built to commemorate the 20th anniversary of Ferrari in China since the first Ferrari, a 348 TS, was ordered in Beijing. It is distinguished by its Marco Polo Red body colour, golden dragon graphic on the front bonnet, gold and black livery stripes symbolising a racing track, gold painted wheels, gold aeroelastic winglets, gold embroidery on the car's head rests, engine start button inscribed with the simplified Chinese characters for 'start' and a '20th Anniversary Special Edition' plaque on the dash.

The vehicle was unveiled at the Italia Center of Shanghai World Expo Park.[27][28] 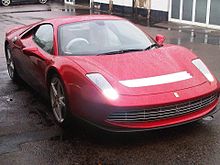 The Ferrari SP12 EC is a one-off sports car built by Ferrari for English musician Eric Clapton under Ferrari's Special Projects programme,[29] and based on the 458 Italia.[30] It was revealed in May 2012[31] and shown at the 2013 Goodwood Festival of Speed.[32] The bespoke SP12 EC's bodywork is inspired by that of the Ferrari 512 BB,[33] and was designed by Centro Stile Ferrari in collaboration with Pininfarina.[34] It uses the mechanicals of the 458 Italia, including its 4.5-litre V8 engine and seven-speed dual-clutch transmission,[35] although many of the car's technical details are considered confidential.[34] The car reportedly cost £3,000,000.[36]

The Pininfarina concept car, named in memory of long standing chairman Sergio Pininfarina, is a modern interpretation of the 2-seater barchetta built upon the 458 Spider's mechanicals. In keeping with the traditional open barchetta body style, it has no windshield; two matching helmets are provided for the driver and passenger.

The car was first shown in March 2013 at the Geneva Motor Show. According to Pininfarina, the Sergio was developed like a production car, and therefore it could be produced in limited numbers.[37][38]

Ferrari built six units of the Ferrari Sergio in collaboration with Pininfarina in 2015 and sold it to handpicked customers. The production version incorporates a targa top body style due to complexities and high production costs arising in producing the original design of the car. They use the engine of the 458 Speciale and each unit reportedly cost US$3,000,000.[39]

Ferrari 458 MM Speciale at the Goodwood Festival of Speed 2016.

The 458 Speciale MM is a one-off sports car based on a Ferrari 458 Speciale and built for a British customer. The design pays homage to the Ferrari 288 GTO and incorporates handcrafted aluminium and carbon fibre components.[42]

Weight of the 458 Challenge was reduced from the standard 458 through the use of thinner body panels, carbon fibre replacement panels, and polycarbonate windows and windshield.[45] Other differences over the regular road legal 458 include a racing cockpit with a Sabelt racing seat and six-point seat-belt harness, detachable steering wheel using a Lifeline quick-detach, plumbed-in Lifeline fire extinguisher system, air-jack mounting on the rear to lift the car up, racing fuel filler cap, center-lock wheels, a racing exhaust as well as tow hooks on the front and rear. The 2014 Evo upgrade was mainly focused on improving the aerodynamics of the 458 Challenge, with the most obvious change being the inclusion of a large rear wing. Ferrari sold an Evo upgrade kit, so that pre-2014 458 Challenge cars could be upgraded by Ferrari dealers and race teams to Evo spec.

Ferrari unveiled their new GTE class racer in 2011 to take part in Championships sanctioned by ACO and FIA. The 458 Italia GT2 drops the "flex splitter" found in the road cars in favour of a more conventional inlet, with the air exiting out through the louvers in the bonnet. Under new restrictor regulations, the 4.5-litre V8 engine generates a power output of 470 PS (350 kW; 460 hp), which is less than the road car and the 458 Challenge. Unlike the road car, which has a high-revving low-torque engine, the engine in the GT2 version only has a red line of 6,250 rpm, but maintains a close-to-stock torque number even with the horsepower loss. The double-clutch gearbox had to be replaced, but paddle-shifting is retained since the amended rules in 2011 allow them.

Ferrari also unveiled a GT3 version of the Ferrari 458 Italia in 2011. The car is slightly lighter and more powerful than the GT2 version, generating a power output closer to 558 PS (410 kW; 550 hp) and has a red-line of 9,000 rpm. The engine thus performs more similarly to that of the road car than the GT2 version. The aerodynamics of the car are also slightly different due to different aero regulations.[48]

The 458 Italia GT3 has achieved many important victories in its career. It has won six times the 24 Hours of Spa-Francorchamps (two in the GT3 PRO AM category and two in the Gentlemen Trophy), four times the Gulf 12 Hours (three overall and one in the Gentlemen Trophy), the 2013 and 2014 12 Hours of Sepang, the 2014 and 2015 24 Hours of Dubai in the A6-AM class, the 2014 Liqui Moly Bathurst 12 Hour at the famous Mount Panorama Circuit in Bathurst and the 2014 24 Hours of Barcelona.

In 2012, Ferrari developed a modified version of the 458 GT3 for Grand-Am. The car weighs the same but produces less downforce than the GT3 car; the engine is also restricted more heavily, generating a power output of 507 PS (373 kW; 500 hp) and having an 8,000 rpm redline.[48] Instead of a dual-clutch automatic transmission, the car is fitted with a conventional sequential manual transmission.[49]

The roll-cage is also modified due to stricter safety regulations. The Grand-Am version lacks traction control and ABS. The car debuted at the 2012 24 Hours of Daytona. AimAutosport.com is the first team to win with the new 458 Italia Grand-Am spec. On 9 Sept. 2012, drivers Jeff Segal and Emil Assentato finished second at Laguna Seca and clinched the Grand-Am Rolex GT championship.

On 24 August 2010, BBC News reported that ten 458s had either crashed or caught fire in just three months.[53] Ferrari responded later that it was aware of the fire-related cases, and was in the process of investigating them.[53][54]

On 1 September 2010 Ferrari officially recalled all 1,248 of the 458s sold to date. A spokesman commented that the problem had been traced to an adhesive used in the wheel-arch assemblies and that, in certain circumstances, the glue could begin to overheat, smoke and even catch fire. In extreme cases the melting adhesive could lead to the heat shield deforming, and hence moving closer to the exhaust, causing the wheel-arch lining to catch fire. Owners who had reported fires, that were later confirmed by independent engineers to be due to this problem, received a new car. All other cars were modified by replacing the adhesive with mechanical fasteners.[55]

In 2012, Ferrari recalled certain 2011 and 2012 US market cars because the engine could seize suddenly and possibly cause a crash. The F136 engines had incorrectly mounted crankshafts. The manufacturer learned of one such incident from a review car lent to critics. Owners could choose from having a new engine installed by their dealer, having the engine removed and the work done by Ferrari North America or having a new crankshaft and bearings installed at the dealership.[56] 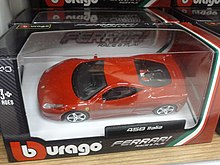 Hot Wheels produced a 1:18 scale model of the 458 Italia, Spider, GT2, Challenge, China Edition and, later, the Speciale versions under both its regular "Mattel / Heritage" and premium "Elite" and "Super Elite" lines of collectible die-cast models.[57] Bburago also produced variants of the 458, such as the Italia, Spider and Challenge, in diecast in 1:18, 1:24, 1:32, and 1:43 scales under its "Race and play" line up. The Speciale version in 1:18 scale followed later under both its "Race and play" and "Signature series" lineups.[58]

After the Ferrari 458 Italia had been reported to cost much more in China than the United States, the Chinese Automobile Dealers Association (CADA) began working in conjunction with the National Development and Reform Commission for possible price-fixing, despite automakers' claim of a 24% import tariff, 17% value-added tax, and a consumption tax having been added to the car's price.[59][60]