The Ferrari 488 GTE is a grand tourer racing car built by Ferrari's in-house Competizioni GT unit, for competition in endurance racing. It is a replacement for the Ferrari 458 GT2 racing car, using the Ferrari 488 as a base. The car is built in accordance with the Automobile Club de l'Ouest/FIA LM GTE regulations introduced for the 2016 season, and it currently competes in the IMSA WeatherTech SportsCar Championship, FIA World Endurance Championship, and the European Le Mans Series.[3] The car had its race debut at the 2016 24 Hours of Daytona, with the Scuderia Corsa and Risi Competizione teams.[4]

488 GTE at the Museo Ferrari

Following the launch of the Ferrari 488, a Ferrari spokesperson confirmed that a racing version of the car would be unveiled soon.[5] On 30 August 2015, spy photographs taken at the ACI Vallelunga Circuit showed tests of a highly camouflaged car undergoing testing, with major differences compared to the outgoing 458 GT2.[6] The car was launched at the 2015 Finali Mondiali at the Mugello Circuit, alongside its GT3 counterpart.[7] At the launch, few details of the car were shared, with the engine carrying over from the 488 GTB being the main announcement.[8] The car can shift between LM GTE, and Group GT3 specification.[9]

On 13 November 2017, Ferrari Competizioni GT technical coordinator Ferdinando Cannizzo confirmed that both the 488 GTE and GT3 would be receiving Evo kits, aimed at improving reliability, as well as aero performance optimization.[10] The 488 GTE Evo had its shakedown test at Ferrari's Fiorano Circuit on 30 March 2018.[11] Following a wind tunnel test at the WindShear facility, the 488 GTE Evo had its front dive-planes removed.[12] Cannizzo suggested that the car could remain in competition until 2021 with a second Evolution, instead of Ferrari developing a new car.[13] 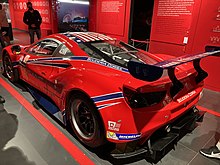 The JMW Motorsport Ferrari in the pitbox before the 2017 4 Hours of Spa.