The Ferrari 599 GTB Fiorano (internal code F141) is a grand tourer produced by Italian automobile manufacturer Ferrari. It was the brand's front engined, two-seat model that replaced the 575M Maranello in 2006 as a 2007 model, and was replaced for the 2013 model year by the F12berlinetta.

Styled by Pininfarina under the direction of Jason Castriota, the 599 GTB debuted at the Geneva Motor Show in February 2006. The bodywork features optimized aerodynamics with distinct sail panels flanking the rear window, directing and maximizing air flow to a linear rear nolder.[7]

The 599 is named for its total engine displacement 5,999 cc (6.0 L), Gran Turismo Berlinetta nature, and the Fiorano Circuit test track used by Ferrari.

The 6.0 L (5,999 cc) Tipo F140 C V12 engine utilised in the 599 produces a maximum power output of 612 hp (456 kW; 620 PS) between 7,600 rpm to 8,400 rpm, which made it the most powerful series production Ferrari road car at the time of its introduction. When introduced, the engine was one of the few engines whose output exceeded 100 hp (75 kW; 101 PS) per litre of displacement without the use of forced-induction such as supercharging or turbocharging. Its 448 lbf⋅ft (608 N⋅m) of torque produced at 5,600 rpm was also a record for Ferrari's GT cars at the time. Most of the modifications to the engine were done to allow it to fit in the 599's engine bay (the original version used in the Ferrari Enzo would be taller and would block forward vision due to its mid-mounted position construction).[8]

The 599 saw the use of an aluminium chassis for the first time in a Ferrari GT car, as opposed to the tubular steel chassis used in its predecessors. The new chassis results in more rigidity and contributes to the low dry weight of 1,690 kg (3,726 lb) as compared to its predecessor, the 575M. The 599 boasts a longer wheelbase than its predecessor and the fuel tank is positioned at the rear in a mid mounted position for better weight distribution. Due to such measures, the 599 has a claimed power to weight ratio of 367 PS per tonne.[14]

The side profile of the 599

The 599 utilises an underbody spoiler and venturi tunnels that contribute to downforce. The arched C-pillars in a 'flying buttress' style also aid further in downforce by channeling the air around the rear section thus eliminating the need of a rear wing. The buttresses were initially a styling exercise by exterior designer Jason Castriota. Their aerodynamic effect was proven by Ferrari aerodynamicist Luca Caldirola with the wind tunnel testing.[1] Due to this fact, the 599 generates a claimed 160 kg (353 lb) of downforce at 299 km/h (186 mph). The car also has functional brake cooling ducts on the front and rear body panels for improved brake cooling.[14]

The 599 utilises magnetorheological semi-active dampers along with its suspension coils. The dampers function by a liquid within the damper reservoir which when subject to magnetic field within the liquid chamber, changes its viscosity. The function of the liquid along with the reaction and stability control are controlled through a knob on the steering wheel. The 599 came with cast iron brakes as standard while the carbon-ceramic brakes (a technology that was scarcely utilised in road cars at the time) were available as an option. The rotors measured 398 mm (15.7 in) at the front and 360 mm (14 in) at the rear.[14]

The 599 came with a luxurious leather trimmed interior. The driver's seat was positioned slightly towards the centre in order to provide a better driving position. The instrument cluster was a combination of analogue gauges and screens. The shift paddles could either be optioned in aluminium or in carbon fibre and were affixed to the steering column. The three spoke steering wheel housed controls for the car's electronic systems as well as a starter button. The interior has a glove box, storage space in the door panels and combination of simple dials and buttons for operating the stereo, climate control and air conditioning. The car has a rear shelf and a boot-lid providing adequate boot space.[14]

The Ferrari 599 GTB Fiorano HGTE (HGTE being an abbreviation of Handling Gran Turismo Evoluzione) is an upgrade package for the 599 designed to improve the car's handling. It includes a modified set-up with stiffer springs and rear anti-roll bar as well as new calibration settings for the Delphi MagneRide magneto-rheological shock absorbers when the manettino is at its sportier settings. The ride height has also been lowered, resulting in a low centre of gravity. The package also includes optimised tyres featuring a compound that offers improved grip. The car's electronic systems were also changed. The gearbox's shift times were faster in high-performance settings, while new engine software provided improved response. The exhaust was modified to produce a more marked and thrilling sound under hard usage while still delivering the right comfort levels at cruising speed. The exterior and interior were upgraded with more carbon fibre components and the car also included new 20-inch wheels.[17]

Ferrari has produced only two other models that used the GTO designation: the 1962 250 GTO and the 1984 288 GTO with the third being the 599 GTO.[23] Unlike the previous GTOs however, the 599 GTO was not designed for homologation in any racing series.

Rear view with the roof removed

The roadster variant of the 599, the SA Aperta, was introduced at the 2010 Paris Motor Show as a limited edition in honour of designers Sergio Pininfarina and Andrea Pininfarina, with the "SA" designation standing for both their names. The SA Aperta utilised the higher performance engine and gearbox from the 599 GTO and has a 10 mm (0.4 in) lower ride height, thicker rear anti roll bar and recalibrated magnetic dampers. The SA Aperta also has a slightly raked windscreen as compared to the 599 GTB along with larger cooling ducts in the new front bumper and a rear bumper in body colour. The car has a removable soft top that was only intended for use in city driving and to protect the interior from rain. The boot-lid was made of aluminium while the C-pillars were made of carbon fibre and have a silver finish along with the windshield frame. The exhaust system was a modified version of the one used in the 599XX and the car has special 5-spoke wheels unique to the variant with a chromed finish along with a triple layer body paint. The interior was also redesigned and has a two-tone colour scheme and the car has sports seats as standard equipment.[24][25] Only 80 examples were produced, honoring the 80th anniversary of Pininfarina and all were sold before the car was unveiled to the public.[26] 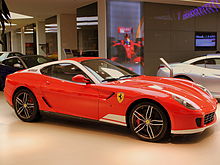 In December 2011, Ferrari announced a special edition of the 599 GTB to celebrate 60 years of their wins in F1. From Froilán González's win at Silverstone in 1951 with the 375 F1, to Fernando Alonso's win at Silverstone in 2011 in the 150° Italia, Ferrari have been winning hundreds of F1 races. The car was based on the 599 HGTE chassis, that utilised stiff suspension, shorter springs and stiffer anti-roll bars. The new 20" diamond-finished forged alloy wheels and Scuderia Ferrari shields came on the body as standard. There were three choices of paint finishes to choose from:

The interior in the European version of the car has Sabelt bucket seats whereas the US version featured Recaro bucket seats, both being made from Alcantara.[28]

The Ferrari P540 Superfast Aperta is a one-off convertible sports car based on the Ferrari 599 GTB Fiorano.[29] This car represents the second car in Ferrari's Special Project program.

Edward Walson commissioned the car in 2008, asking Ferrari to build a modern interpretation of the gold covered Carrozzeria Fantuzzi-bodied Ferrari 330 LMB built for the 1968 film Spirits of the Dead. The P540 was revealed to the public on December 11, 2009, but had been spotted in spy shots several months previous to this.[30]

Designed by Pininfarina and built in Maranello, this car was designed to comply with international safety and homologation requirements. Using finite element analysis and carbon fibre, the car's chassis was stiffened for the conversion to a convertible body style. As it is based on the 599 GTB F1, many of the specifications of the P540 are similar to its donor car. Total time of development was 14 months.

The Ferrari Superamerica 45 is a one-off with a rotating targa hardtop based on the 599 GTB, that was commissioned to Ferrari by longtime Ferrari enthusiast and collector Peter Kalikow to commemorate his 45 years as a Ferrari client. Part of Ferrari's Special Project programme, it was designed at Centro Stile Ferrari and engineered in-house by Ferrari.[31] The car made its public debut at Concorso d'Eleganza Villa d'Este on 20 May 2011.[31]

The carbon fibre hardtop roof incorporates a rear screen and rotates around a horizontal axis behind the cabin, a mechanism similar to that of the 2005 Ferrari Superamerica. The boot, also made from carbon fibre, has been redesigned to house the roof when open and to increase downforce at the rear of the car. As well as being finished in Blu Antille, other key visual features include a chromed front grille, body coloured wheels, carbon fibre panels and special burnished aluminum A-pillars, wing mirrors and door handles.

The interior features a combination of Cuoio leather trim and Blu Scuro carbon fibre as well as a latest-generation touch-screen infotainment system.

The Zagato 599 GTZ Nibbio was introduced in 2007 by Zagato and was based on the Ferrari 599 GTB. It was limited to only nine units worldwide, seven of which were built with the F1 automated manual transmission and two with the 6-speed manual. Two of the ones with the F1 automated manual transmission are spyder. The manual coupe car, painted dark blue with a white top half, was listed for sale in December 2018 for US$1.495 million at Tomini Classics in Dubai.[32]

The Ferrari SP30 is a one-off based on the 599 GTO and completed in 2013. It is the fifth project completed by Ferrari's special projects division and it includes elements from the 599XX and the F12 which was released a few months earlier. It was commissioned by Cheerag Arya, the owner of a petrochemical company.[34] The car's VIN is ZFF70RDT7B0188026.[35]

Motor Authority reported that Ferrari president Luca Cordero di Montezemolo was working on the development of a Ferrari model that would use alternative energy sources and which would be based on what Ferrari is doing in Formula 1, which uses Kinetic Energy Recovery System. The KERS was tested using a 599 as a test mule. The model was later revealed to be the LaFerrari.[36]

The successor to the 599 was announced on 29 February 2012, a few days prior to the Geneva Motor Show. Ferrari released a video featuring Fernando Alonso and Felipe Massa driving the car at Ferrari's own test track, the Pista di Fiorano.[38] The car, named the F12berlinetta, was officially unveiled at the Geneva Motor Show on March 6, 2012.[39]