The Ferrari Colombo Engine was a petrol fueled, water cooled, carburetted 60° V12 engine designed by Gioacchino Colombo and produced in numerous iterations by Italian automaker Ferrari between 1947 and 1988. The maker's first homegrown engine, its linear successor is the Lampredi V12,[1] which it far outlived, the last Lampredi being made in 1959.

Enzo Ferrari had long admired the V12 engines of Packard, Auto Union, and Alfa Romeo[4] (where he was long employed), but his first car, the 1940 Auto Avio Costruzioni 815, used a Fiat derived straight-8. Development of the V12 Colombo engine continued long after Colombo had been replaced by Aurelio Lampredi as the company's marquee engine designer. Although the Lampredi V12 was a real force for the company, it was Colombo's engine which powered Ferrari to the forefront of high-performance automobiles through the 1950s and 1960s. 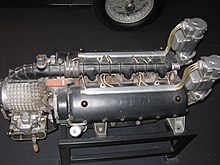 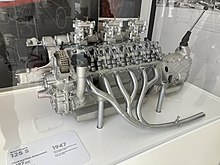 Colombo and Ferrari had designed the engine with Formula One regulations in mind, and introduced it the next year in the company's first F1 car, the 125 F1. This time, it was supercharged, in accordance with F1 dictates, for a total output of 230 PS (227 hp; 169 kW) at 7,000 rpm. However, the single-stage Roots-type supercharger was incapable of producing the high-end power required to compete with the strong eight-cylinder Alfa Romeo 158 and four-cylinder Maserati 4CLT. Nevertheless, strong driving and a nimble chassis allowed the company to place third in its first outing, at the Valentino Grand Prix on September 5, 1948 and the company persevered in racing.

For 1949, the engine was further modified with dual overhead camshafts (though still two valves per cylinder) and a two-stage supercharger.[5] This combination gave the car better top-end performance and the resulting 280 PS (276 hp; 206 kW) gave it five Grand Prix wins. Development continued the following year, but the problematic superchargers were dropped in favor of larger displacement and Lampredi's 275 engine superseded the original Colombo design. 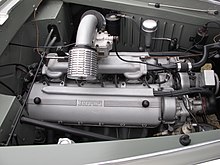 Early road cars had a single carburetor and log manifold as the standard option.

Beginning with the famous 250 TR, "Testa Rossa" racing car, Ferrari began a new series of modifications to the Colombo 250 engine. The spark plugs were moved to the outside of the cylinder head, near the exhausts. This enabled Ferrari to introduce separate individual intake ports to use with the six two barrel Weber carburetors. Four cylinder head bolts per cylinder were introduced (instead of three) to cope with the added power.[6]

These changes eventually were incorporated into the Ferrari road cars, beginning with the 250 GT SWB and the 250 GT Series II Pininfarina cars.[7][8]

Although the 1963 330 series also used a 3,967 cc (4.0 L; 242.1 cu in) engine with the same bore and stroke as the 400 Superamerica, this 300 PS (221 kW; 296 hp) engine was quite different. It used a wider bore spacing, paving the way for future displacement increases. The spark plugs were moved and a new water pump was used. The dynamo on the prior versions was replaced by an alternator.

The Colombo V12 was substantially reworked for 1967's 275 GTB/4. It still used two valves per cylinder, but dual overhead cams were now used as well. In a departure from previous Ferrari designs, the valve angle was reduced three degrees to 54° for a more-compact head. The dual camshafts also allowed the valves to be aligned "correctly" (perpendicular to the camshaft) instead of offset as in SOHC Ferraris. It was a dry-sump design with a huge 16 L (17 US qt) capacity. The engine retained the bore and stroke dimensions of the 275 model for 3,286 cc (3 L; 201 cu in) of displacement. Output was 330 PS (325 hp; 243 kW) at 8000 rpm and 240 lb⋅ft (325 N⋅m) of torque at 6000 rpm with six 40 DCN 9 Weber carburetors.