The Ferrari F355 (Type F129) is a sports car manufactured by Italian car manufacturer Ferrari produced from May 1994 to 1999. The car is a heavily revised Ferrari 348 with notable exterior and performance changes. The F355 was succeeded by the all-new Ferrari 360 in 1999.

Design emphasis for the F355 was placed on significantly improved performance, as well as drivability across a wider range of speeds and in different environments (such as low-speed city traffic).[2]

The side profile of the Ferrari F355

Apart from the displacement increase from 3.4 L (3,405 cc) to 3.5 L (3,495 cc), the major difference between the V8 engine in the 348 and F355 is the introduction of a 5-valve cylinder head. This new head design allowed for better intake permeability and resulted in an engine that was considerably more powerful, generating a maximum power output 380 PS (279 kW; 375 hp) at 8,250 rpm and 363 N⋅m (268 lb⋅ft) of at 6,000 rpm.[2] The longitudinally mounted 90° V8 engine was stroked by 2 mm over the 348's engine (77 mm rather than 75 mm), resulting in the small increase in displacement. Engine internals are produced using lightweight materials; the connecting rods are forged in Ti6-Al-4V titanium alloy. The engine's compression ratio is 11:1 and employs the Bosch Motronic 2.7 engine control unit in the 1995 model year, later changed to the M5.2 in 1996 through end of production. The Motronic system controls the electronic fuel injection and ignition systems, with a single spark plug per cylinder. Engine lubrication is via a dry sump oiling system. The engine was designed by Paolo Martinelli.[3]

The F355 addressed transmission issues that plagued the earlier models. A coolant heat-exchanger was installed which upon startup, warmed the gearbox oil quicker. A rod-driven actuation system, which replaces the 348's cable operated system, was also added for precise gear shifts.[4]

The frame is a steel monocoque with tubular steel rear sub-frame with front and rear suspensions using independent, unequal-length wishbones, coil springs over gas-filled telescopic shock absorbers with electronic control servos and anti-roll bars. The car allows selection between two damper settings, "Comfort" and "Sport". The road-going models came with Pirelli tyres, size 225/40ZR 18 at the front and 265/40 ZR 18 at the rear. Although the F355 was equipped with power-assisted steering (intended to improve low-speed drivability relative to the outgoing 348), this could optionally be replaced with a manual steering rack setup by special order.[2]

Aerodynamics for the car included over 1,300 hours of wind tunnel analysis. The car incorporates a nolder profile on the upper portion of the tail and a fairing on the underbody that generates downforce when the car is at speed.[2]

The car's standard seats are upholstered with hides from Connolly leather, and are fitted asymmetrically in the car; this results in the driver being slightly closer to the car's centerline than the passenger.

At launch, the only model available was the Berlinetta. The Spider (convertible version), and the GTS (targa top model) were introduced in 1995. In 1997, the Formula One-style electrohydraulic-operated automated manual paddle-shift transmission was introduced and the cars equipped with this transmission were called 355 F1.[1][5] The F355 was the last in the series of mid-engine Ferrari models with the Flying Buttress rear window, a lineage going back to the 1965 Dino 206 GT, unveiled at the Paris Auto Show. 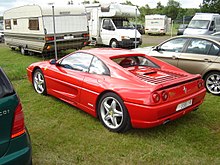 The Berlinetta was introduced in May 1994, as the first in a successful series of F355 models. Initially, the 6-speed manual was the only transmission available. However, in 1997, the Berlinetta was the first-ever road car to be equipped with the innovative F1-style gearbox management system. Derived directly from Formula 1, where it made its debut in 1989 resulting in a win at the Brazilian Grand Prix, the electro-hydraulic system was operated by paddles behind the steering wheel using the F355's conventional 6-speed manual gearbox. The new transmission guaranteed faster gear changes, with the additional advantage that both of the driver's hands could stay on the wheel at all times.[2]

Ferrari produced 4,871 road-going Berlinetta models during the entire production run, of which 3,829 were equipped with the 6-speed manual and 1,042 with F1 transmissions. 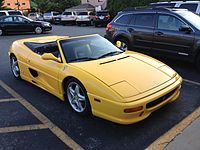 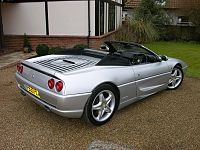 The F355 Spider debuted in 1995, its Pininfarina-penned lines honed by 1,800 hours[6] in the wind tunnel, resulted in a blend of elegant style and aerodynamic performance. For the first time on a Ferrari automobile, the automated manual soft-top was powered electronically. Initially, the Spider was offered with the 6-speed manual transmission. In 1997, the Spider was offered with the F1 transmission available as an option. The Spider proved to be the second-most popular F355 model, with a total production of 3,717 units, of which 2,664 were produced with the 6-speed manual transmission and 1,053 were produced with the F1 transmission. 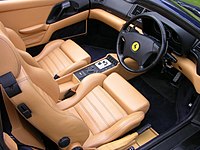 In 1995, Ferrari introduced the GTS model to the F355 family. The GTS model was based on the Berlinetta but offered a removable "targa-style" hardtop roof, which could be stored behind the seats. Other specifications were identical to the Berlinetta. A total of 2,577 GTS models were produced, with 2,048 delivered with the 6-speed manual transmission and another 529 with the F1 transmission.

In 1995, Ferrari introduced a race-ready F355 Challenge model for use specifically in the Ferrari Challenge race series.[7] The Ferrari F355 Challenge model was developed by starting with a standard Ferrari F355 Berlinetta and modifying it with a US$30,000 factory-to-dealer supplied kit. The initial 1995 cars came with factory fitted cage mounts and without carpets. Each year, the cars arrived with more and more factory fitted race parts, culminating in 1998 with full-evolution cars which were supplied as virtually complete race cars except for some parts such as the rear wing, which still needed to be fitted by the dealer.

The kit initially was more substantial than the 348 Challenge and the engine, gearbox, and shock-absorbers were sealed with special tags to prevent unauthorized modifications. The kit included the following components/modifications:[8]

The F355 Challenge shares the same engine and physical dimensions as the standard F355 Berlinetta. 108 cars in total were produced, all of which were equipped with the 6-speed manual transmission. Although some sources indicate that over 300 cars were subject to the Challenge conversion, yet this claim remains unproven. There were 18 RHD cars imported by Ferrari UK and modified by MHT. A further 10 were sold to the rest of the RHD markets. Making the total number to only 28 RHD models.[citation needed] These RHD models become extremely rare and valuable. Some of these rare cars are located in Indonesia, Australia, Japan, and only one known example in South Africa.[citation needed] Each F355 Challenge has an emblem on the rear that specifically denotes the "F355 Challenge."

For the 1999 model year, Ferrari introduced a limited production of F355 Spider models designated, "Serie Fiorano". Launched in March 1999, this limited production run of 100 planned units (104 actually produced) included a number of enhancements increasing the track performance much closer to the Challenge versions:[9]

There were 100 Serie Fiorano units delivered to the U.S. market, 74 with the F1 paddle-shift transmission and 26 with the 6-speed manual. An additional 4 units were produced beyond the planned production for the U.S., with only 3 European models and one unit destined for South Africa. The American units were delivered with a numbered plaque affixed to the dashboard while the 3 Fioranos delivered to Europe had no numbered plaque.[citation needed]

Total production of 11,273 units made the F355 the most-produced Ferrari at the time. This sales record would be surpassed by its successor, the 360 and later, the F430.

In November 2009, Ferrari recalled about 2,400 1995–99 355s and 355F1s in the United States because of improperly placed screw clamps that could damage the fuel-supply pipes and allow fuel to leak into the engine compartment. Ferrari learned of the problem when it was sued over a fire involving an injury to a driver.[14]

In the 1995 James Bond film Goldeneye, femme fatale Xenia Onatopp races in a Ferrari F355 with James Bond in an Aston Martin DB5 in the hills above Monte Carlo.

In the 1996 action film The Rock, an FBI agent commandeers a Ferrari F355 and pursues an escaped prisoner driving a stolen Humvee through the streets of San Francisco.

The music video of the single "Araba" by Turkish singer Mustafa Sandal featured a Ferrari F355, racing through Istanbul against a canoe racer on the Bosphorus.

The music video for "Got the Life" by Korn featured the F355 F1 Spider in the opening and throughout the video, ultimately driving it into a water run-off area resulting in its explosion.

The F355's racing variant, the F355 Challenge appears as the main playable car in the Sega video game of the same name, which was developed by Sega AM2 and published for the arcades and later the Dreamcast, and later the PlayStation 2 following Sega's decision to quit making consoles after the Dreamcast's failure to focus on becoming a software company. The Ferrari F355 also appears in a few video games such as Need For Speed III: Hot Pursuit, Forza, Supercar Challenge, as well as Project CARS 2.