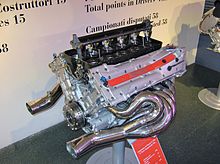 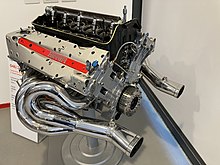 This Tipo 046 engine is notable for being the first to use the then more conventional V10 engine format, because a V10 engine offered the best compromise between power and fuel efficiency; the V12 was powerful but thirsty, and vice versa for a V8. The engine was also called the 310. It was engineered by former Honda technician Osamu Goto. The engine is a 75-degree V10; and produces 715 hp @ 15,550 rpm.[21][22] The engine itself weighs 120 kg (265 lb). 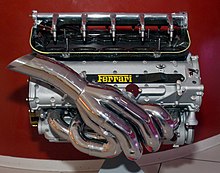 Giles Simon lead the engine design procedure and operations of the Tipo 049. The engine was newly designed, with a wider V-angle (90 degrees vs. 75 degrees in the 048 engine); this new wider angle improved and lowered the centre of gravity of the car that it powered. The engine produced between 805 and 815 hp @ 17,300 RPM.[26][27] 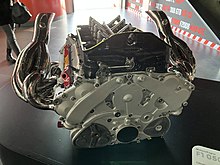 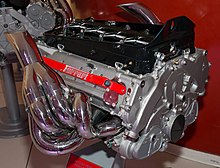 Ferrari Tipo 051 is the name of a racing engine from the Italian manufacturer Ferrari, which the team used in Formula 1 in the 2002 season. The V10 engine was developed under engine chief Paolo Martinelli.

The Type 051 was a new development but based on the architecture of its predecessor, the Tipo 050. All the main components have been revised. The engine block was made using a refined micro-casting technology. The cylinder heads were downsized and the crankcase modified so that the crankshaft was lowered, giving the vehicle an exceptionally low center of gravity. Associated components have been redesigned to reduce rotating masses and friction.

Ferrari also developed a new transmission for the new engine. The new case is significantly smaller, stiffer, and made from a lightweight titanium alloy, making it around 15% lighter than its predecessor. Along with the lighter internals and new clutchless direct shift technology, this resulted in smoother and faster shifting. Prototypes of this transmission were already on the test bench in September 2001. In this way, the team was able to ensure that, despite all the innovations, it was reliable right from the start.

The engine management came as before from Magneti Marelli, Shell supplied the fuel.

Ferrari officially specified 835 hp at 17,800 rpm. In qualifying mode, however, the engine developed up to 900 hp at 19,000 rpm. In order to ensure durability, the performance in the race was reduced. There it delivered up to 865 hp at 18,600 rpm. With this power, the Type 051 was considered one of the most powerful engines in the field and was only surpassed by the P81 used by BMW Williams. This made up to 940 hp, but was less reliable than the Type 051.

In the course of the season, there were two further expansion stages, type 051B/C.

Giles Simon and Paolo Martinelli led the engine's design and operations. The 3.0-litre Tipo 051 V10 engine produced 835 horsepower (623 kW) @ 17,800 rpm in race trim.[30] In qualifying mode, however, the engine developed up to 900 horsepower (670 kW) at 19,000 rpm.[31][32] The engine had a very low centre of gravity, but to ensure durability and reliability, the engine performance was reduced during the race. Thus, the Tipo 051 was capable of producing 865 horsepower (645 kW), and revving to a maximum of 18,600 rpm, all while having excellent handling. The new 051 engine was not the strongest engine of 2002, only being beaten out by the BMW P81 engine used by the Williams team (which produced 940 horsepower (700 kW)); but it was lighter, more compact, very fuel-efficient, and very driveable. An innovative and very small clutchless gearbox allowing ultra-quick changes had been designed, and because the unit was so small, the rear end aerodynamics were extremely tightly packaged.[33] Bridgestone developed special tyres, suited specifically for the car.[34][35][36] 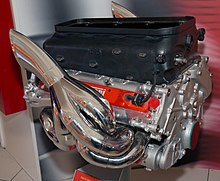 Ferrari Type 052 is the name of a racing engine from the Italian manufacturer Ferrari, which the team used in Formula 1 in the 2003 season. The V10 engine was developed under engine chief Paolo Martinelli.

The Tipo 052 was used by Ferrari in the 2003 season. Ferrari contested the first four races of the season with the previous year's car, the F2002. The Type 052 was not used until the fifth race with the debut of the F2003-GA. This was because the F2003-GA's chassis was designed around the engine.

The Tipo 052 was a completely new development. Ferrari essentially pursued two goals when developing the Tipo 052. On the one hand, the performance and drivability of the engine should be improved without impairing the reliability of the predecessor. On the other hand, the engine should be even better adapted to the design of the chassis in order to achieve better weight distribution. The team also hoped that the improved integration would result in weight savings of 4-5 percent and improved aerodynamics at the rear of the car. In addition to better integration, new materials also resulted in weight savings.

Engine management was by Magneti Marelli.

The specification used at the beginning of the season delivered around 200 revolutions per minute more than the predecessor Type 051. 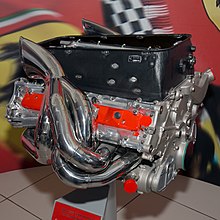 Ferrari Tipo 053 is the name of a racing engine from the Italian manufacturer Ferrari, which the team used in Formula 1 in the 2004 season. The V10 engine was developed under engine chief Paolo Martinelli.

Type 053 is a completely new development. The engine rules introduced for the 2004 season required that each engine last an entire race weekend. An illegal engine change would have resulted in a grid penalty of 10 places. That is why Ferrari focused on durability and reliability when developing the 053. To achieve this goal, all moving parts have been redesigned. The weight increased only slightly compared to the predecessor Type 052, which is partly due to the use of new alloys. The engine management came from Magneti Marelli.[44]

For the fourth year running, Technical Director and Paolo Martinelli, assisted by Giles Simon, lead the engine design and operations. The engine powered the highly successful Ferrari F2004, that was driven by Michael Schumacher and Rubens Barrichello, and gave Schumacher his fifth and final World Championship with Ferrari at the Belgian Grand Prix, and his seventh Formula One World Championship overall. The engine was now designed in accordance with the FIA's new technical regulations for the season, and had to last a full race weekend.[45][46][47] The engine now produced 865 horsepower (645 kW) @ 18,300 rpm in race trim,[48] and around 920 horsepower (690 kW) @ 19,000 rpm in qualifying mode.[49] The engine also now weighed only 92 kg (203 lbs.).[50]

For the San Marino Grand Prix, there was the first stage of development that delivered 920 hp.

Ferrari Type 055 is the name of a racing engine from the Italian manufacturer Ferrari, which the team used in Formula 1 in the 2005 season. The V10 engine was developed under engine chief Paolo Martinelli.[52]

The Tipo 055 is a further development of the predecessor Type 053. The engine rules introduced for the 2004 season were tightened again for the 2005 season. From now on, an engine had to last two entire race weekends. An illegal engine change would have resulted in a grid penalty of 10 places. Therefore, as in the previous year, Ferrari's focus in the development of the 055 was on durability and reliability. To achieve this goal, many parts were newly developed, some could be taken over from the predecessor. Although the engine was stable, the weight increased only marginally.[53]

The engine management came as before from Magneti Marelli. Shell supplied new fuel and lubricants that should have a positive impact on reliability.

Throughout the season there were the usual stages of expansion.