Skip to content
Not to be confused with Ford C-Max or Ford S-Max.
Motor vehicle

The Ford B-Max (stylized as Ford B-MAX) code name: B232, is a mini MPV (M-segment) manufactured by Ford Europe from 2012 to 2017. Built on the Ford global B platform, it was initially unveiled as a concept car at the 2011 Geneva Motor Show,[2] and was officially launched at the 2012 Mobile World Congress in Barcelona.[3]

Production began in June 2012, and marketing of the first units started during late July.[4] It was launched in the United Kingdom on 1 September 2012.[5] The B-Max is based on the Ford Fiesta, and its main rivals were the Fiat 500L, the Citroën C3 Picasso and the Nissan Note.[6]

The styling of the B-Max continues the Ford Kinetic Design theme, and has rear sliding doors with no B-pillars.[7] The B-Max is available with the new 1.0 litre three cylinder engine of the Ford EcoBoost family, that features turbocharged direct injection and start-stop system.[8]

This engine officially won the title of "International Engine of the Year 2012".[7] The 1.6 litre Duratec engine can be fitted with the PowerShift six speed dual-clutch automatic gearbox.[9]

It has three different trim levels: Studio, Zetec and Titanium. The Studio is the basic model, and it is available only with the 1.4 litre engine.[10] The first B-Max was bought by the President of Romania, Traian Băsescu, on 25 June 2012, directly from the Craiova plant.[11] In September 2017, production of B-Max ended, due to dwindling demand for the model, as well as a general decline in sales of mini MPVs.

Unusually for a Ford, this model did not receive a mid cycle facelift in order to boost sales, the closest successors were intended as the EcoSport as well as the Fiesta Active, transitions from MPV to SUV design.

The B-Max features the "Intelligent Protection" system. It also featured Ford's Torque Vectoring Control, which improves handling and agility, and the SYNC and Fold Flat systems.[7] Ford's Emergency Assistance feature alerts local emergency services operators after an accident, in the correct language for the region. It was available in more than thirty countries, mostly in Europe.[12] 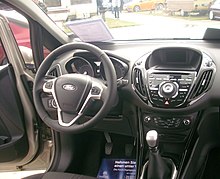 The Ford B-Max was tested by Euro NCAP in September 2012, receiving a five star safety rating.[13]

The Telegraph reviewed the B-Max on 28 August 2012. The reviewer, Andrew English, gave the car a 4 out of 5 stars, and his verdict was that it “brings something new and useful to the market”.[14]