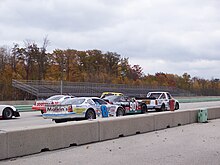 Formula Libre-type field on the starting grid before an exhibition race at Road America. The event featured NASCAR Cup and Truck Series vehicles against local late models and other stock cars.

Formula Libre, also known as Formule Libre,[1] is a form of automobile racing allowing a wide variety of types, ages and makes of purpose-built racing cars to compete "head to head". This can make for some interesting matchups, and provides the opportunity for some compelling driving performances against superior machinery. The name translates to "Free Formula" – in Formula Libre races the only regulations typically govern basics such as safety equipment.

In 1932, Louis Chiron won the Nice Grand Prix aboard a Bugatti T51, closely followed just 3.4 seconds behind by Raymond Sommer in an Alfa Romeo Monza with third place going to René Dreyfus, also in a Bugatti T51. In 1933, the race was won by Tazio Nuvolari in a Maserati 8C, followed by René Dreyfus in his Bugatti and Guy Moll in an Alfa Romeo Monza. In 1934, the race was again won by an Italian in an Alfa Romeo Tipo B, none other than the best driver of the season, Achille Varzi. The last season to feature a Grand Prix at Nice was in 1935, when the Alfa Romeo Tipo Bs dominated the circuit in the hands of Tazio Nuvolari and Louis Chiron, who placed second, and René Dreyfus, who took third.

Most recently, the British Open Single Seaters (BOSS) Formula has spawned EuroBOSS [1] and USBOSS [2] equivalents, signalling the re-emergence of Formula Libre events. Racing purists have come to embrace Formula Libre as an alternative to the increasing preponderance of spec racing series, and a number of competitors' vehicles are cars orphaned by discontinued spec series.

The concept is arguably the oldest in motor racing: