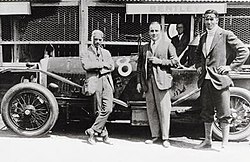 Left to right: Frank Clement, W.O. Bentley, and John Duff in front of their Bentley which won the 1924 24 Hours of Le Mans.

One of the "Bentley Boys", Clement was recruited by W.O. Bentley as a test driver for Bentley Motors. He was chosen by the company to drive in the inaugural 24 Hours of Le Mans in 1923 with John Duff in Duff's privately entered car. The only British team in the event, the pair finished the race in fourth after fighting for the lead for much of the race. The following year Duff returned with his private Bentley and the two won the race outright over several Lorraine-Dietrichs and Chenard-Walckers.

In a bid to win the Rudge-Whitworth Triennial Cup, the two drivers remained paired in 1925, and Bentley offered more support by adding a second car to the team. However, their car would fail halfway through the event and would not be able to finish. Bentley improved to a three car team for 1926, and Clement was assigned to co-drive with George Duller, although once again the car was not able to finish. Over the next two years, although Bentley won Le Mans two more times, Clement's car still was unable to finish the endurance event. In 1929 Clement once again was able to last the entire event as Bentley dominated, earning the top four finishing positions. Clement ran his final Le Mans in 1930, finishing in second place, before Bentley chose not to continue at Le Mans the following year.