The Firestone Grand Prix of St. Petersburg is an IndyCar Series race held in St. Petersburg, Florida. In most years since 2009, the race has served as the season opener (or at minimum, the first race held on U.S. soil).[1] The race is held annually in the spring, with the exception of 2020, when it was postponed until October due to the COVID-19 pandemic.

The race takes place on a temporary course, utilizing downtown streets, and one runway of Albert Whitted Airport. The event dates back to 1985, with IndyCars first competing in 2003.

The inaugural 1985 event was organized by William T. McVey, president of the McBri Corporation in Tampa and a member of IMSA and the SCCA.[2] The SCCA Trans-Am Series held a race on a St. Petersburg downtown waterfront circuit from 1985 to 1990. Can-Am also competed in 1985. Local residents and businesses complained about noise, and the event was eventually put on hiatus.[3] Driver Jim Fitzgerald was killed in a crash during the 1987 race.[4][5]

From 1996 to 1997, the St. Petersburg race was revived on a different course around Tropicana Field (about one mile west of the original waterfront course). Along with the Trans-Am Series, support races included U.S. FF2000, World Challenge, Pro SRF and Barber Dodge. The event subsequently went again on hiatus for several years.[3]

In 2003, the event was revived again for the Champ Car World Series. A new, modified version of the original 1985 waterfront circuit was created.

For 2004, the event was cancelled due to a dispute between the promoters, furthermore, the bankruptcy and liquidation of the CART series into the new Champ Car World Series saw a shakeup of the calendar. When the race returned in 2005, it switched to the IndyCar Series, marking the first non-oval event for the Indy Racing League. In 2007, the race weekend was expanded to include an American Le Mans Series event.

Andretti Green Promotions would later take over promotion of the event.[6] Starting in 2014, Firestone took over as title sponsor.[7] 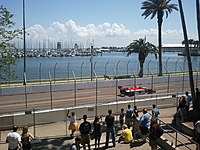 Stefan Wilson driving along the Bay Shore Drive Southeast section during the qualifying race of the Indy Lights 2011. 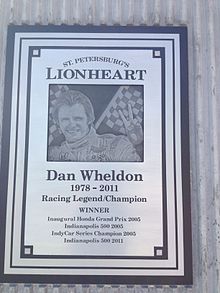 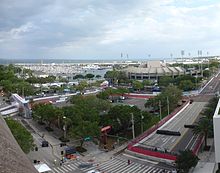 The section of the 2012 Honda Grand Prix of St. Petersburg that curves through the Al Lang Stadium parking lot

The Streets of St. Petersburg course is a street circuit connecting existing roads with one of the two runways of Albert Whitted Airport in St. Petersburg, Florida. It also dips into the parking lot at Al Lang Stadium. St. Petersburg is classified as an FIA Grade Two circuit.[17]

The original 1985 Trans-Am course utilized a similar layout to the course used today. For the first year the track actually ran out to the pier, made a 180 degree turn and returned. At the end of Bayshore Drive, rather than diverting off to the airport runways, the course circled around 5th Avenue Southeast around Bayfront Arena, and the start/finish line was located just south of the paddock (the parking lot of Bayfront Arena). In addition, the old course traveled further up Beach Drive Northeast, all the way to 5th Avenue Northeast. 5th Ave. NE was a very narrow segment. The course came south down Bayshore Drive Northeast, and passed by The Pier.

The second course at Tropicana Field was located about a mile west of the waterfront location. The circuit used the roads around the perimeter of the parking lot of the stadium. 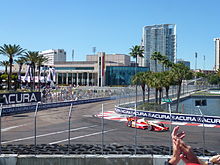 When the course was reconfigured, the northbound segment turned at Central Avenue instead, and did not go as far as The Pier. The pits and main straight were moved to the airport, and a purpose-built paddock area was paved next to the runway. The Albert Whitted Park was reconfigured/relocated, and the entire course layout was repaved.

The pits and paddock areas, as well as link from Dan Wheldon Way to the airport runway (turns 11, 12, and 13) were constructed specifically for the circuit in 2003, and are considered permanent features of the otherwise temporary circuit.

After the crash at the 2011 Izod IndyCar World Championship that killed Snell Isle resident Dan Wheldon, who won the 2005 race and two Indianapolis 500 titles, the straight following Turn 10 (the turn from Bayshore Drive to Albert Whitted Park) was renamed "Dan Wheldon Way" in his memory. The sign and commemorative plaque was unveiled by St. Petersburg mayor Bill Foster on March 6, 2012. A permanent Dan Wheldon Memorial is located next to the Dali Museum on the opposite side of Turn 10, where race winners have their names placed on the memorial.[18]

The official race lap records at the Grand Prix of St. Petersburg are listed as: