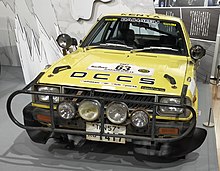 The Group 1 racing class referred to FIA regulations for cars in touring car racing and rallying. Throughout its existence the group retained a definition of being standard, series production touring cars, and of having a character of being unmodified or not specifically prepared for racing. The class was introduced in the then new Appendix J of the International Sporting Code in 1954 and was replaced by Group N in 1982.[1][2]

From its inception in 1954 until 1965, Group 1, officially documented at first as the first group, was included in Category I (or A), Touring Cars, with a production requirement of between 600 and 1000 cars in a 12 month period.[2] The two categories had up to six groups in this time era, but not consistently or retaining the same definitions.

In 1966 the FIA categories were restructured and Group 1 were placed in Category A, Production Cars, with Category B and C used for Sports and Racing cars respectively. Group 1 essentially remained the same in character but with a heightened production requirement of 5000 cars.[3] In 1982 the numbered groups were replaced by Groups N, A, B, C, D and E.