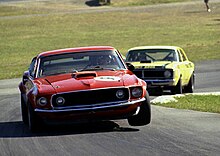 For 1973 CAMS introduced a new Group C Touring Car category to replace both the existing Group C Improved Production and Group E Series Production. The new Group C cars would contest both the Australian Touring Car Championship and the Australian Manufacturers' Championship, the later having previously been contested by Group E cars and run over numerous long-distance events such as the Bathurst 500 and the Sandown enduro. The new Group C classification had been brought about by the media-driven 'Supercar scare' of 1972 which led to Ford Australia, General Motors Holden and Chrysler Australia ceasing direct involvement with the manufacture of high performance production cars for Group E racing. Holden would continue support of touring car racing until the end of the 1970s. Ford closed their factory team at the end of 1973 and then provided technical and limited financial support of Allan Moffat Racing between 1976 and 1978, but Chrysler ended its involvement at the end of 1972.

Group C touring cars also contested the Amaroo Park (Sydney) based AMSCAR series from 1981 to 1984. The series, televised nationally by ATN-7, was restricted to cars with an engine capacity of no more than 3.5 litres in 1981, excluding the outright cars such as the Holden Commodore, Ford Falcon and Chevrolet Camaro and Jaguar XJ-S. After complaints from the mostly Sydney based privateers who ran the outright cars and thus were missing out on potential prize money (with no such series on offer for the outright cars), the restriction was lifted in 1982 and outright cars contested the series to the end of Group C in 1984.

The Bathurst 1000, as it became in 1973, would change several times, reflecting its roots as a race where four or five individual races held simultaneously with no outright winner promoted. The 1973 version began with cut-offs at 1300cc, 2000cc and 3000cc. For the 1977 race the under 1300cc class was abandoned and a 1600cc class was introduced for the 1979 race. After a one-off cylinder-based system used in 1981, the two smaller classes were removed leaving just under and over 3000c. The capacity based system was abandoned entirely for the final Group C Bathurst race in 1984 with one class for Group C cars and one for the new Group A cars to be raced from 1985.