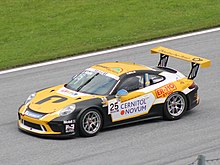 Gustav Malja at the Red Bull Ring in 2018

Born in Malmö, Sweden, Malja began his karting career in Formula Micro in 2006, winning the Gunnar Nilsson Memorial trophy the following year.[1] By 2009 he had progressed up to the KF3 category, where he won the Swedish Championship and Gothenburg Grand Prix.[2] In his final year of karting in 2010, Malja finished 22nd in the European KF3 Championship and fifth in the Junior Monaco Kart Cup.[3]

In 2011, Malja graduated to single-seaters, racing in the ADAC Formel Masters championship in Germany, despite being just 15 years of age.[4] Driving for Neuhauser Racing, he took a single podium position at Assen to finish thirteenth in the standings.[5] He continued with the team for a second season in 2012, taking three race wins and a further thirteen podium places to finish runner–up to champion Marvin Kirchhöfer.[6]

Malja remained with Josef Kaufmann Racing in both championships for a second season in 2014.[10] He finished fifth in the NEC championship, taking race victories at Hockenheim[11] and the Nürburgring[12] and two further podium positions.[13] In the Eurocup, he scored points on eight occasions to finish twelfth in the championship.[14]

Malja stepped up to the Formula Renault 3.5 Series in 2015 and raced for British team Strakka Racing.[15]

In May 2015, Malja took part in the Pau round of the FIA European Formula 3 Championship, racing for EuroInternational in the car originally intended for Marvin Kirchhöfer before he left the team prior to the start of the season.[16] He retired from the opening race of the event before finishing 25th in the remaining two races.

Malja contested in the Spa round of the 2015 season with Trident and the final two rounds with Rapax. In 2016, Malja joined the GP2 series campaign full-time for Rapax, finished on the podium twice and finished thirteenth overall.

For the 2017 F2 season, Malja switched to Racing Engineering.[17] He finished third in the Monaco sprint race.

Malja participated in the second 2017 Formula 1 in-season test at the Hungaroring during 1–2 August, following the Hungarian GP weekend. Malja drove a Sauber C36-Ferrari for the Sauber F1 Team during the first test day. He completed 108 laps. His best lap was 1.21.503, set during aerodynamic and mechanical development runs.[18]