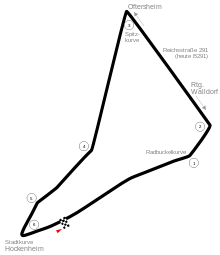 Originally called "Dreieckskurs" (triangle course), the Hockenheimring was built in 1932. The man behind it is Ernst Christ, a young timekeeper who felt that a racing track should be built in his hometown of Hockenheim. He submitted the plans to the mayor and they were approved on Christmas day, in 1931. This first layout of the track was around twelve kilometres long and consisted of a large triangle-like section, a hairpin in the city and two straights connecting them. 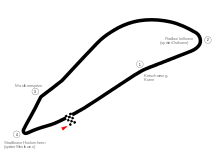 This version used to be quite large, with a very long and very fast section going through forests essentially consisting of four straights of roughly 1.3 km (0.81 mi), separated by a chicane sequence, followed by a more tight and twisty "stadium" section (so called because of all the grandstands situated there) named Motodrom. This made the setting up of racing cars difficult, since a choice had to be made – whether to run low downforce to optimize speed through the straights and compromise grip in the stadium section, or vice versa. The long track length also meant that a typical Formula One race had only 45 laps, limiting the spectators' experience of the race to only that many passes through the stadium.

During the mid-1980s "turbo era" of Formula One where fuel was restricted to either 220 (1984–1985), 195 (1986–1987) or 150 (1988) litres for races for the turbo powered cars, Hockenheim also saw drivers, including World Champion Alain Prost, at times fail to finish due to simply running out of fuel near the end of the race. Prost ran out at the end of the 1986 race, pushing his McLaren towards the line before giving up. He was placed 3rd when he ran dry and was eventually classified 6th, gaining a valuable championship point that would help him with his second World Championship. 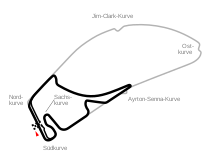 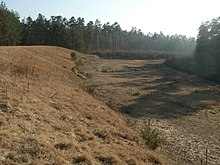 The new track has a seating capacity of 120,000, due to new large grandstands sponsored by Mercedes-Benz. The complex also features a quarter-mile track for drag racing. It hosts one of the largest drag racing events in Europe, known as the NitrOlympx, and was one of the last Top Fuel circuits to race to 0.25 miles (0.40 km) before the FIA switched the nitro categories to the now-recognised 1,000 feet (300 m) distance in 2012.

The drag strip is only used for two events in August, the Public Race Days and the NitrolympX [de] main event a week later. Originally named the Nitrolympics and featuring Top Fuel dragsters, it was renamed to NitrolympX.