Jacques-Henri Laffite was born in Paris on 21 November 1943. He attended the Cours Hattemer, a private school.[2]

Laffite debuted in Formula One in 1974 for Frank Williams' Iso–Marlboro team. The following year he raced for the same team, now named Williams, scoring a second place in the German Grand Prix at the Nürburgring. 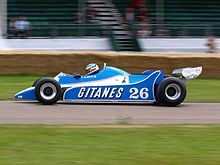 In 1976 Laffite moved to the French Ligier team, scoring 20 points and a pole position at the Italian Grand Prix. The next two seasons were transitional, although he managed to win his first Grand Prix at Anderstorp in the 1977 Swedish Grand Prix.

The 1979 season opened with Laffite winning the first two races. He fought for the World Championship title until the last races, but eventually placed only fourth, with 36 points. The following two seasons were similar, with two more fourth places in the Championship and a further three victories. In 1982, however, Laffite finished only 17th in the final classification, with only 5 points scored.

During the early 1980s, Laffite also made three end of season trips to Australia to race in the non-championship Australian Grand Prix. He failed to finish his first race in 1981 (he was lucky to start after his car hit the wall on the outside of the last turn of the short (1.609 km (1.000 mi)) Calder Park Raceway in qualifying, but his local crew were able to repair it for the race). He finished second to fellow Frenchman Alain Prost in 1982, and third behind Brazilian Roberto Moreno and Australian John Smith in 1983. In all of his pre-Formula One AGP drives, Laffite drove a Formula Pacific or Formula Mondial Ralt RT4 powered by a 1.6-litre Ford l4 engine.

Results in the next two seasons were not much better, when he moved back to England, again to race for Williams (11 and 5 points, respectively). Now in his forties, Laffite returned to Ligier in 1985: in that season he was on the podium three times (Great Britain, Germany and Australia), for a total of 16 points. In 1986 he scored 14 points including two more podium finishes in the first half of the season, but he broke both legs in a crash at the start of the British Grand Prix at Brands Hatch, and thereafter retired from Formula One. The race was stopped and restarted without Laffite, who was thus classified as a non-starter and ended his career tied with Graham Hill for the most Grand Prix starts. He was the most successful driver in Ligier's history, having taken six of their nine wins.

As a result of Laffite's injuries, new safety rules were enforced from the 1988 season that stated that in all cars the driver's feet must be behind the front axle line.

Laffite recovered from his injuries and later raced in touring cars, finishing 17th in the inaugural World Touring Car Championship driving an Alfa Romeo 75 for Alfa Corse as well as racing three seasons in the German-based DTM series.

He is now a television commentator for the French network TF1, best known for his reaction to the incident at the 1997 European Grand Prix in which Michael Schumacher collided with Jacques Villeneuve, and Laffite reacted with curse words on live television.

Laffite has two daughters: Camille and Margot, a sports journalist of Formula One on Canal+. He is also golf enthusiast, is a shareholder of Dijon-Bourgogne Golf.

Also deeply attached to the Creuse for Golf Fisheries and nature, he has a property in Creuse near Aubusson.