Skip to content
For other uses, see Jump seat (disambiguation). 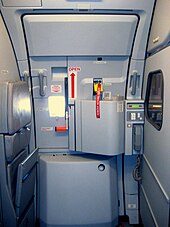 Airbus A319 door showing folded-up jump seat on the left.

In aviation, a jump seat or jumpseat is an auxiliary seat for individuals—other than normal passengers—who are not operating the aircraft.[1] In general, the term 'jump seat' can also refer to a seat in any type of vehicle which can fold up out of the way; vehicles include carriages, automobiles, vans, buses, fire tenders, and taxicabs. The term originated in the United States c. 1860 for a movable carriage seat.[citation needed] 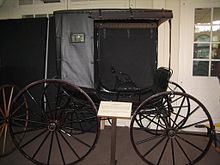 The 1911 Gräf & Stift Double Phaeton in which the Archduke Franz Ferdinand was riding when he was assassinated. Note the two jump seats behind the front seats.

Jump seats were features of many early automobiles, but are now rare, present mainly in limousines. They're also used in UPS delivery vans.

The UPS Driver Helper sits in a jump seat.

Some pickup trucks also employ jump seats, particularly those with an extended cab which don't have room for full rear passenger seats. These seats are often mounted against the side of the cab interior and fold up when not in use.

In airplanes, jump seats—which are officially termed auxiliary crew stations—can be located in cockpits or passenger cabins. In cockpits, jump seats are provided for individuals who are not operating the aircraft. These might include trainee pilots, off-duty crew members in transition to another airport (see deadheading), government officials (such as Federal Aviation Administration staff), or airline staff. The passenger cabin jump seats are used by the cabin crew, especially during takeoff and landing. These jump seats are normally located near emergency exits so that flight attendants can quickly open the exit door for an emergency evacuation. The passenger cabin jump seats usually fold out of the way when not in use to keep aisles, workspaces, and emergency exits clear.[citation needed]

Some airplanes do not have jump seats in the cockpit, while others have one or two. In most airliners, the observers' seats have an audio selector panel so that the observer can monitor or participate in flight communications.[2] An oxygen mask is provided for each station. There can be extra flight attendant jump seats in the main cabin, depending on how the airline has configured its aircraft and how many on-duty flight attendants are staffed. Both types might be stand-alone seats, or folding. Either type of jump seat may sometimes be used by off-duty staff (or an employee of another airline or other person) engaging in non-revenue travel, when no passenger seats are available in the cabin (a practice known as jumpseating). Increased security requirements for the flight deck since September 11, 2001, have meant a tightening of restrictions on who is allowed to use jump seats.

CASS (Cockpit Access Security System) is now used by most Part 121 US carriers as a means to allow a crew member to have access to a cockpit jump seat.[citation needed]