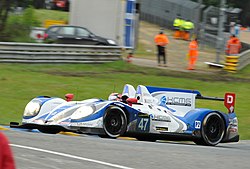 KC Motorgroup Ltd, known as KCMG, is an auto racing team based in Hong Kong. Founded by former racing driver Paul Ip in 2007, KCMG has participated in a variety of championships across the world in touring car, sports car, and open-wheel racing.[1]

In 2013, KCMG expanded outside Asia with an entry in the 24 Hours of Le Mans[2] before entering the FIA World Endurance Championship in 2014, during which the team won three races.[3] The team went on to win the 2015 24 Hours of Le Mans in the LMP2 category on its way to a second-place finish in the 2015 WEC season. However, in the following year, KCMG pared down its LMP2 participation to a one-off entry at Le Mans. KCMG did contest the full 2016 WEC season, albeit in the GTE Am category,[4] finishing fourth in what would be its final season in the championship.

In April 2021, KCMG announced the launch of a new young driver programme named the KCMG Driver Development Project with Irish racer Alex Dunne being named as its first signing the following day.[6][7] The program provides its members with dedicated coaching staff on race weekends, and physiotherapists, managers and tutors to improve their fitness, media skills and education.