Lagonda is a British luxury car brand established in 1906, which has been owned by Aston Martin since 1947. The trade-name has not had a continuous commercial existence, being dormant several times, most recently from 1995 to 2008 and 2010 to 2013. 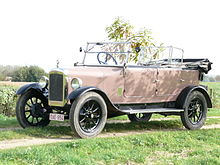 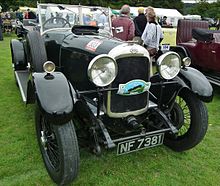 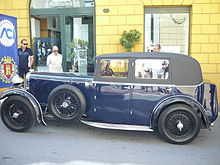 The Lagonda company was founded in 1906 in the UK in Staines, Middlesex, by American-born Wilbur Gunn (1859–1920),[1] a former opera singer.[2] He became a British national in 1891 and worked as a speedboat and motorcycle engineer in Staines. He named the company after the Shawnee settlement "Lagonda" in modern-day Springfield, Ohio, the town of his birth.[3][4] This is a glacially eroded limestone gorge of much beauty.

Historically, the area played a major role in the Treaty of Easton and the aligning of the Shawnee tribe with the British during the French and Indian War.[5] He had built motorcycles on a small scale in the garden of his house in Staines[1] with reasonable success, including a win on the 1905 London–Edinburgh trial. In 1907 he launched his first car, the 20 hp, six-cylinder Torpedo, which he used to win the Moscow–St. Petersburg trial of 1910.[1] This success produced a healthy order for exports to Russia which continued until 1914. In 1913, Lagonda introduced an advanced small car, the 11.1, with a four-cylinder 1,099 cc engine, which, by 1914, featured a panhard rod and a rivetted unibody body and the first ever fly-off handbrake.

The ratchet control button on the end of a fly-off handbrake is designed to work in the opposite way to what is normally expected. If the lever is lifted or pulled back to the "on" position, on letting go it immediately releases unless the end button is pressed and held in place before letting go of the lever. Once set, the brake is released by lifting the handbrake lever (not pushing the button) in the setting direction (up or back). This mechanism was traditionally fitted to sports cars to facilitate a racing get-away, such as at traffic lights. It can also be used to help the back wheels to slide, without the worry of the ratchet leaving the brake on.

During the First World War the Lagonda company made artillery shells.[1]

After the end of the war the 11.1 continued with a larger, 1,400 cc, engine and standard electric lighting as the 11.9 until 1923 and the updated 12 until 1926. Following Wilbur Gunn's death in 1920, three existing directors headed by Colin Parbury took charge.[1] The first of the company's sports models was launched in 1925 as the 14/60 with a twin-cam 1,954 cc four-cylinder engine and hemispherical combustion chambers. The car was designed by Arthur Davidson who had come from Lea-Francis. A higher output engine came in 1927 with the two-litre Speed model which could be had supercharged in 1930. A lengthened chassis version, the 16/65, with a six-cylinder 2.4-litre engine, was available from 1926 to 1930. Their final car of the 1920s was the three-litre using a 2,931 cc six-cylinder engine.Apra l, K. "Lagonda 1930". www.classiccarcatalogue.com. Retrieved 10 July 2013. This continued until 1933 when the engine grew to 3,181 cc and was also available with a complex eight-speed Maybach transmission as the Selector Special.

All was not well financially and the receiver was called in 1935,[7] but the company was bought by Alan P. Good, who just outbid Rolls-Royce.[1] He also persuaded W. O. Bentley to leave Rolls-Royce and join Lagonda as designer along with many of his racing department staff.[1] The 4.5-litre range now became the LG45 with lower but heavier bodies and also available in LG45R Rapide form. The LG45 came in three versions known as Sanction 1, 2 and 3 each with more Bentley touches to the engine. In 1938 the LG6, with independent front suspension by torsion bar and hydraulic brakes, came in.

Along with ex-Rolls Royce employees, Stuart Tresillian and Charles Sewell, and design expert Frank Feeley, Bentley hid distaste for the primitive conditions of Lagonda's factory, and got to work on the new engine that was to become his masterpiece, the V-12, launched in 1937. The 4,480 cc engine delivered 180 bhp (130 kW) and was said to be capable of going from 7 to 105 mph (11 to 169 km/h) in top gear and to rev to 5,000 rpm. The car was exhibited at the 1939 New York Motor Show: "The highest price car in the show this year is tagged $8,900. It is a Lagonda, known as the "Rapide" model, imported from England. The power plant is a twelve-cylinder V engine developing 200 horsepower."[8]

Richard Watney was managing director of Lagonda at the start of the Second World War:

He was Rootes' retail sales manager for the London area until 1935, when he became managing director of Lagonda Ltd. He was a production expert, who during the war organised and controlled for Lagonda one of the largest British gun production plants, and also plants which produced 50,000 25 lb shells a day. Watney also developed and produced the "Crocodile" and "Wasp" flame-throwing equipment for armoured vehicles."[9]

Watney finished second at Le Mans in 1930 driving a Bentley. He returned to Rootes in 1946, and was posted to Australia. He was killed in a car accident in Melbourne in 1949.[10]

In 1947, the company was taken over by David Brown and moved in with Aston Martin, which he had also bought, in Feltham, Middlesex. The old Staines works at Egham Hythe passed to Petters Limited, in which A.P. Good had acquired the controlling interest.[11] Production restarted with the last prototypes from Bentley, the 1948 2.6-litre with new chassis featuring fully independent suspension. Its new 2,580 cc twin overhead cam straight-six became the basis for the Aston Martin engines of the 1950s. This was replaced by the 3 litre in 1953 and continued to be available until 1958.

Many thought that the marque had disappeared, but in 1961 the Rapide name was resurrected, with a four-door saloon based on the contemporary Aston Martin DB4, with an aluminium body by Carrozzeria Touring of Milan and a 3,995 cc engine capable of taking the car to 125 mph (201 km/h). By this time, Aston Martin-Lagonda as it now was, had moved to Newport Pagnell in Buckinghamshire. The Rapide lasted until 1965.

In 1969, the Lagonda name was briefly resurrected, appearing on a four-door prototype of the new DBS model. The prototype was allocated chassis MP230/1, and was retained by the factory until 1972 and used by Sir David Brown as his personal car, registered "JPP 5G". The car originally ran a prototype five-litre V8 engine but this was quickly replaced by an early 5.3-litre production quad carb version (VS4008EE).

Between 1974 and 1976, seven Lagonda four-door saloons were produced based on the 1969 prototype. The production models adopted a single-headlight treatment with a Lagonda "horseshoe" grille in place of the twin-headlamp treatment of the prototype.

In 1976, a new Lagonda saloon appeared, the large and futuristic Aston Martin Lagonda designed by William Towns. This low, rather square, wedge-shaped car was built on Aston Martin V8 components and was available until 1990. A total of 645 were built.

During 1993–94, nine Lagonda four-door saloons and seven shooting brakes (badged on the rear door or tailgate as Les Vacances) were made based on a stretched Aston Martin Virage. These are the only factory-built shooting brakes in Aston Martin's history; six were bought by a foreign royal family.[12] They could be ordered with the 5.3-litre V8 (310 HP) or the 6.3-litre V8 (500 HP) engine.

Aston Martin said on 1 September 2008, as reported by Automotive News Europe, that it would relaunch its Lagonda brand to help it expand into new markets such as luxury saloons and celebrate Lagonda's centennial anniversary in 2009.

"The Lagonda brand would allow us to develop cars which can have a different character than a sports car," said CEO Ulrich Bez in a statement. "Lagonda will have its own niche with luxurious and truly versatile products suitable for both existing and emerging markets".[13]

"Lagonda models would be vehicles that could be used all year round in markets such as Russia where specialized sports cars such as Aston Martins could only be used for three or four months each year", said Aston Martin spokeswoman Janette Green.[13]

At the 2009 Geneva Motor Show, Aston Martin unveiled a 4WD, four-seat SUV to commemorate the 100th anniversary of the first Lagonda car. It includes a V12 engine and 22-inch wheels.[14]

The Rapide name was revived in 2010 as the Aston Martin Rapide saloon.

Aston Martin confirmed the revival of the Lagonda brand on 9 March 2011. The new range initially consisted primarily of high-end SUVs.[15]

In 2014, however, Aston Martin announced a large, low-bodied saloon version, the Taraf, a £1 million car powered by a Normally Aspirated V12 producing 565 HP and 465 lb-ft of torque. The Taraf was limited to only 200 production units and is being sold in the UK and US markets, despite initial plans to be offered only in the Middle East.

A Lagonda is owned and driven by the husband and wife couple, played by Joan Fontaine and Cary Grant in the thriller Suspicion (1941).

A Lagonda is portrayed as driven and owned by Captain Arthur Hastings, the assistant of Hercule Poirot in Agatha Christie's Poirot television series; produced by ITV Studios. While Hasting's Lagonda appears to be an M45 model of the mid-1930s, the early episodes of the series are set in the 1920s, so this was a production inaccuracy.

A Lagonda appears in the 2021 film Infinite.