A Larbre Compétition Chrysler Viper GTS-R which the team ran from 2001 to 2003. 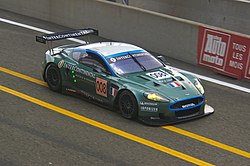 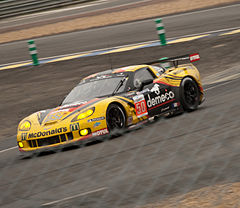 Larbre Compétition is a French auto racing team founded in 1988 by Jack Leconte. Based at the Circuit du Val de Vienne in Le Vigeant, Larbre has had considerable success in the Porsche Carrera Cup, French GT Championship, and international FIA GT Championship. Previously working with major automobile manufacturers like Porsche, Ferrari, and Chrysler, Larbre ran one of the factory Aston Martin squads in the Le Mans Series where they won the 2006 GT1 class championship.

For 2008 Larbre chose to enlist Saleen S7-Rs for the Le Mans Series and FFSA GT Championship. The team continued with the GT1 Saleens during the 2009 LMS season, but ACO denied an entry from them for the 2009 24 Hours of Le Mans.

For 2010 Larbre competed once again with the 10-year-old Saleen S7-R in the Le Mans Series, with drivers Fernando Rees, Gabriele Gardel and Patrice Goueslard. In 2010 24 Hours of Le Mans the team took the last LMGT1 class win with the aging Saleen S7-R, as well championship victories from both Le Mans Series and Intercontinental Le Mans Cup.

In 2011 the GT1 class got axed from ACO-sanctioned racing, and the old GT2 category (renamed as GTE) became the premier GT class. The team entered a Chevrolet Corvette C6.R into the GTE-Am division of the Le Mans Series and 24 Hours of Le Mans. The team won the GTE-Am category of the 2011 24 Hours of Le Mans with the Corvette and also took the second place with Porsche GT3 RSR. They also won the ILMC GTE-AM championship and thus became the first team to win a professional championship with a GT2-spec Corvette C6.R.

In 2012 and 2013, Larbre competed in the FIA World Endurance Championship with two GTE-Am class Corvette C6.Rs.

For 2014, Larbre competed in the first race of the European Le Mans Series season, the 4 Hours of Silverstone, with Keiko Ihara and Gustavo Yacamán driving a Morgan LMP2. The team also competed in the 24 Hours of Le Mans as an ELMS entry with the addition of Ricky Taylor.

For 2015, Larbre is currently competing with a Chevrolet Corvette C7.R in the GTE-Am class of the FIA World Endurance Championship with drivers Gianluca Roda, Paolo Ruberti, Kristian Poulsen, and Nicolai Sylvest. The team continues in the FIA World Endurance Championship in 2016, again with a Corvette C7.R racing in GTE-Am. The driver lineup consists of Yatuka Yamagishi, Pierre Ragues, and Paolo Ruberti.