Skip to content
This article is about the city in France. For the sportscar endurance race, see 24 Hours of Le Mans. For racecar type, see Le Mans Prototype. For other uses, see Le Mans (disambiguation).
Prefecture and commune in Pays de la Loire, France

listen)) is a city in northwestern France on the Sarthe River where it meets the Huisne. Traditionally the capital of the province of Maine, it is now the capital of the Sarthe department and the seat of the Roman Catholic diocese of Le Mans. Le Mans is a part of the Pays de la Loire region.

Its inhabitants are called Manceaux (male) and Mancelles (female). Since 1923, the city has hosted the 24 Hours of Le Mans, the world's oldest active endurance sports car race.

First mentioned by Claudius Ptolemy,[3] the Roman city Vindinium was the capital of the Aulerci, a sub tribe of the Aedui. Le Mans is also known as Civitas Cenomanorum (City of the Cenomani), or Cenomanus. Their city, seized by the Romans in 47 BC, was within the ancient Roman province of Gallia Lugdunensis. A 3rd-century amphitheatre is still visible. The thermae were demolished during the crisis of the third century when workers were mobilized to build the city's defensive walls. The ancient wall around Le Mans is one of the most complete circuits of Gallo-Roman city walls to survive.[4]

As the use of the French language replaced late Vulgar Latin in the area, Cenomanus, with dissimilation, became known as Celmans. Cel- was taken to be a form of the French word for "this" and "that", and was replaced by le, which means "the".

As the principal city of Maine, Le Mans was the stage for struggles in the eleventh century between the counts of Anjou and the dukes of Normandy. When the Normans had control of Maine, William the Conqueror successfully invaded England and established an occupation. In 1069 the citizens of Maine revolted and expelled the Normans, resulting in Hugh V being proclaimed count of Maine. Geoffrey V of Anjou married Matilda of England in the cathedral. Their son Henry II Plantagenet, king of England, was born here. In 1154, during the reign of his uncle King Stephen, Henry landed in England with an army, intent on challenging Stephen for the throne. Some of the members of that feudal force were known by the surname 'del Mans' (Latin for of Mans, as the city was then known.) In medieval records pertaining to the history of Gloucester is a reference to one such man, Walter del Mans, and beside his name 'Cenomanus' was added by the medieval scribe, so that there is no doubt as to Walter's origin. In the English censuses down to the twentieth century the surname Mans (latterly often spelled Manns) was virtually confined to the counties of Gloucestershire and Herefordshire and their borderlands, reflecting the original settlement patterns in the Welsh Marches of the original followers of Henry's from Le Mans in 1154. A John Mans/Manns was escheator of Hereford 1399–1400. One family from [Le] Mans held the manor of Dodenham, Worcestershire. (Calendar of the Records of the Corporation of Gloucester, Item 96, ca.1200; Fine Roles Henry III, 23 August. 1233 [Hereford];'Parishes: Doddenham', A History of the County of Worcester, volume 4 (1924), pp. 260–62.) Intercourse between England and Le Mans continued throughout the Angevin period.

In the 13th century Le Mans came under the control of the French crown. It was subsequently invaded by England during the Hundred Years' War.[5]

Industrialization took place in the 19th century which saw the development of railway and motor vehicle production as well as textiles and tobacco manufacture.[5]

Wilbur Wright began official public demonstrations of the airplane he had developed with his younger brother Orville on 8 August 1908, at the Hunaudières horse racing track near Le Mans.[6]

Soon after Le Mans was liberated by the U.S. 79th and 90th Infantry Divisions on 8 August 1944,[7] engineers of the Ninth Air Force IX Engineering Command began construction of a combat Advanced Landing Ground outside of the town. The airfield was declared operational on 3 September and designated as "A-35". It was used by several American fighter and transport units until late November of that year in additional offensives across France; the airfield was closed.[8][9]

Le Mans has an oceanic climate influenced by the mild Atlantic air travelling inland. Summers are warm and occasionally hot, whereas winters are mild and cloudy. Precipitation is relatively uniform and moderate year round. 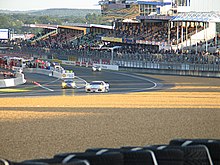 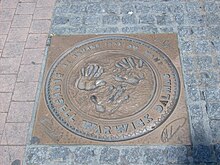 Handprints and signatures from the winners of the 1992 edition of the 24 Hours of Le Mans, Mark Blundell, Derek Warwick, and Yannick Dalmas, at Le Mans

Since the 1920s, the city has been best known for its connection with motorsports. There are two official and separate racing tracks at Le Mans, though they share certain portions. The smaller is the Bugatti Circuit (named after Ettore Bugatti, founder of the car company bearing his name), a relatively short permanent circuit, which is used for racing throughout the year and has hosted the French motorcycle Grand Prix. The longer and more famous Circuit de la Sarthe is composed partly of public roads. These are closed to the public when the track is in use for racing. Since 1923, this route has been used for the famous 24 Hours of Le Mans sports car endurance race. Boutiques and shops are set up during the race, selling merchandise and promoting products for cars.

The 1955 Le Mans disaster was a large accident during the race that killed eighty-four spectators.

The city is home to Le Mans Sarthe Basket, 2006 Champion of the LNB Pro A, France's top professional basketball division.

The team plays its home games at the Antarès, which served as one of the host arenas of the FIBA EuroBasket 1999.

Le Mans was the birthplace of: 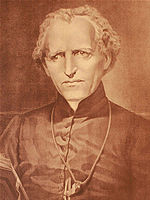 The culinary specialty of Le Mans is rillettes, a shredded pork pâté.

Located at Mayet near Le Mans, the Le Mans-Mayet transmitter has a height of 342 m and is one of the tallest radio masts in France.

See also: Bibliography of the history of Le Mans