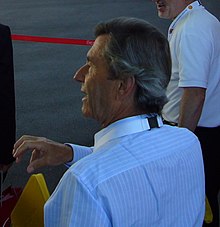 He then joined Ferrari as a Deputy General Manager, and in 1989 moved to Fiat's Centro Stile as Director of Design.[2]

In 1991 he left Fiat and joined Fioravanti Srl which evolved from an architecture studio to a design studio. His two sons, Matteo, an architect, and Luca, an attorney, have also worked with him at Fioravanti Srl. Fioravanti developed a number of prototype and concept cars, often displayed under his own name. In 2012 he was appointed by the Chinese automobile company BAIC Group as a design consultant.[3]

In 2009 Leonardo Fioravanti was elected Chairman of ANFIA Car Coachbuilders Group for a 3-year mandate from 2009 to 2011.[4]

During his time with Pininfarina, Fioravanti designed several Ferraris:

Fioravanti has designed many concept cars including: