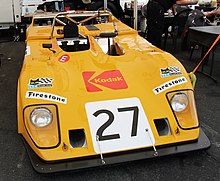 A new regulatory change that would come into force for the 1972 season put Lola back in a position to offer its customers a car with which to face the competition serenely. In fact, Group 6 (which included prototype cars from 1968, with an engine limited to three liters of displacement) was merged with Group 5, which from 1968 included the "Sport Cars" produced in at least 25 units, and so there was a new Group 5 which included the "Prototypes of Sports Cars" (official name: Prototype-Sports Cars) with an engine capacity limit of 3 000 cm³, minimum weight increased to 650 kg and no minimum number of specimens. This decision was also dictated by the intent to slow down the cars, given the performance of the best sports cars in the 1970-71 two-year period, in particular, the Porsche 917 and the Ferrari 512S and 512M. The new sports-prototype cars, which were often old Group 6 adapted to the new regulations, participated in the newborn World Makes Championship using engines derived from those of Formula 1, such as the Ford Cosworth DFV which allowed the cars driven by it to compete well and was available for private stables.[11][12]

Lola boss Eric Broadley understood that the market would demand a simple car to match the DFV and therefore designed the two cars (named T280 for the three-liter class and T290 for the two-liter) together with chief designer Bob Marston, with the help of the then in their twenties Patrick Head and John Barnard, around a monocoque frame in aluminum alloy, a technology already used for the T210 and its derivative T212, around which a highly profiled fiberglass bodywork was modeled.[13]

The T292 stood as an improved version of the previous T290: the aluminum monocoque frame remained practically unchanged compared to the previous versions. The only appreciable diversification at a mechanical level was the relocation of the disc brakes at the differential output rather than on the wheel hubs, in such a way as to reduce unsprung masses and consequently increase the maneuverability of the car. To improve aerodynamics, the front of the car was lengthened, while a fixed wing was placed at the rear. Although the project was mainly intended for the two-liter class and could accommodate several four-cylinder in-line engines, one example of the car was equipped with the three-liter Ford Cosworth DFV V8 engine, with 445 hp.[14][15]

The large number of units produced, especially the T290 series, meant that these cars were used in the most disparate competitions.[11]