Among the greatest drivers between the two World Wars, his career embraced over thirty years, starting in 1927, and ending at the end of the 1950s. He is still the oldest driver ever to have finished in Formula One, having taken 6th place in the 1955 Monaco Grand Prix when he was 55.[1] The Bugatti Chiron takes its name from him.

Louis Chiron gained interest in cars and racing when he was a teenager. He started driving in Grand Prix races after World War I, in which he was seconded from an artillery regiment as a driver for Maréchal Pétain and Maréchal Foch.[1]

He won his first local race, the Grand Prix du Comminges of 1926, at Saint-Gaudens, near Toulouse, and went on to drive a Bugatti and an Alfa Romeo P3 to victories in the Marseille Grand Prix, the Circuit of Masaryk, and the Spanish Grand Prix.[2] In the Indianapolis 500 of 1929, he drove a Delage to 7th place.[2] He won the 1931 Monaco Grand Prix—the only Monégasque driver to have won his home grand prix—and in 1933 he partnered with specialist endurance racer Luigi Chinetti to win the Spa 24 hours race.

Chiron retired in 1938, and World War II curtailed motor racing a year later. When racing resumed after the War, he came out of retirement and drove a Talbot-Lago to victory in two French Grands Prix.[3]

According to a Los Angeles Times review of fellow driver Hellé Nice's biography, Chiron accused her, at a 1949 party in Monaco to celebrate the first postwar Monte Carlo Rally, of "collaborating with the Nazis". The review says biographer Miranda Seymour is "circumspect on Nice's guilt".[4] A review of the same book in The New York Times says Nice was accused of being a "Gestapo agent"; that Seymour "rebuts" the charge; and that it made Nice "unemployable".[5] Seymour's book says that in a letter to Antony Noghes, the head of the Monte Carlo Rally committee, Hellé Nice "protested her innocence"; that she told him she would appeal to the Monaco court unless Chiron wrote an apology; that no letter from Chiron has been found; and that the court has no record of such a case between 1949 and 1955.[6]

Paired with the Swiss driver Ciro Basadonna, Chiron won the 1954 Monte Carlo Rally, and achieved podium finishes in the fifteen Formula One races he entered that year. His last race was in 1955,[7] when he took a Lancia D50 to sixth place in the Monaco Grand Prix a few weeks before his 56th birthday,[8] becoming the oldest driver to compete in a Formula One race.[7] He is also the oldest driver ever to have entered for a Formula One race, taking part in practice for the 1958 Monaco Grand Prix when he was 58. 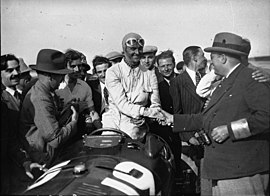 Chiron retired after 35 years in racing but maintained an executive role with the organizers of the Monaco Grand Prix, who honoured him with a statue on the Grand Prix course and renamed the Swimming Pool corner after him.[12] As he had achieved the greatest number of podium finishes in Bugattis, the 1999 Bugatti 18/3 Chiron concept car and the 2016 Bugatti Chiron are named in his honour.[13][14]

Louis Chiron was so popular in Czechoslovakia, whose Grand Prix he won three consecutive times, that even after 75 years his name still lives in a popular saying "He drives like Chiron", used mainly when referring to speeding motorists or generally to people who drive very quickly.[12]