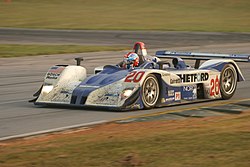 The MG-Lola EX257 (sometimes referred to as simply MG EX257) is a Le Mans Prototype built by Lola for the MG car company for their attempt to compete again at the 24 Hours of Le Mans in 2001. The car has had many years of mixed success since its introduction, even in privateer hands.

It was Lola's only car built specifically to LMP675 regulations, and was known by their designation as the Lola B01/60. The last EX257 in original specification was retired from racing in 2007.[1]

Following a resurgence for the MG brand in the beginnings of the 21st century, the decision was made to expand the brand into motorsports such as touring car racing as well as sports car racing. MG had previously had success at the 24 Hours of Le Mans many decades ago, yet had never scored an overall win. At approximately the same time, the Automobile Club de l'Ouest (ACO) had changed the Le Mans Prototype regulations for Le Mans, making it possible for two different classes of prototype to be capable of taking an overall win. This class, known as LMP675, would use smaller turbocharged engines yet would be lighter and more nimble, making it possible for them to compete with the larger, more powerful LMP900 class.

Seeing an opportunity to use a production-based engine in an LMP675 instead of a custom built engine that would be larger than anything MG had in their production cars at the time, MG decided to enter into this new class in agreement with Lola Cars International. Lola had previously built cars in 2000, known as the B2K/10 and B2K/40, but they were not designed with the LMP675 regulations in mind. Lola would therefore have to build an all new prototype design that would center on the light weight and small engines of LMP675. Since the B2K/40 was more similar to the LMP675 regulations, many design elements of it were brought over for the new car, which Lola designated B01/60. The front fender design of the B01/60 was nearly identical to that of the B2K/40, yet the nose of the car would be radically different, incorporating a large square airbox (shaped like an MG grill) in the raised nose. The sidepods would also be radically different, using sweeping lines to better manage airflow both in and out of the car. A large single air inlet was placed on the top of the car, slightly off to the side of the cockpit in order to house the turbo inlet. Using a design element borrowed from the Audi R8, a single rollbar was used behind the driver, instead of a long rollbar that covered the entire width of the cockpit. In the rear, the wing was mounted low on the chassis in order to increase overall top speed. In the end, the EX257 would be very light, coming to approximately 690 kg at its launch (675 kg being the minimum allowed by the rules).

For an engine, MG would turn to Advanced Engine Research (AER) for construction of their engine and Garrett for turbocharging it. Using some elements of MG's production engines, the new 2.0 Litre turbocharged Inline-4 known as the MG XP20 (AER designation P07) would come to approximately 500 hp, limited by air restrictors put in place by the ACO to equalize cars.

In 2003, the Intersport Racing team would feel that the MG engine was lacking the power necessary for tracks used in the American Le Mans Series. The team would transplant a Judd KV675 naturally aspirated V8 engine in place of the MG XP20. This would necessitate the removal of the large turbo inlet, replacing it with an air inlet mounted behind the cockpit. This car (referred to by its Lola designation only due to the loss of the MG engine) would have a short career with some success.

The new MG-Lola EX257 made its competition debut at the 2001 24 Hours of Le Mans, with two cars being run by MG Sport & Racing Ltd. The new cars showed their pace, qualifying 14th and 17th overall, the fastest two times amongst LMP675. The problems with the LMP675 formula showed their signs early in the race. Although quick even with their small engines, these engines were highly stressed and lacked the capabilities to survive long distances. Following a mere 30 laps, one MG was forced to retire due to exhaust failure. A few hours later, the second MG succumb to an oil leak, leaving MG retired from the event at a very early stage.

For 2002, the EX257s were offered to customers for the first time. Two American teams, KnightHawk Racing and Intersport Racing, would seize the opportunity and purchase one chassis each, for competition throughout the American Le Mans Series season. Improvements to the EX257 allowed for greater durability, and it was shown at Sebring with Intersport taking the LMP675 win and seventh overall, while KnightHawk took third in LMP675. Over the rest of the season, the pair of EX257s dominated the series, taking four more wins total. KnightHawk took the LMP675 championship by a single point over Intersport. Also, for the final four races of the season, a third EX257 would join the series, in the hands of Dyson Racing, who managed fifth in the championship, even with running a handful of races.

Back at Le Mans, the factory MG team again returned with their two EX257s. Their reliability was improved as well, as both cars survived farther than they had the previous year. Gearbox problems eliminated one car after 129 laps. The second car was running strong until the final few hours of the race, when the engine let go. The American KnightHawk team also participated, but their car succumbed to fire during the night.

After two years of being unable to finish at Le Mans, as well as financial strain on the MG Rover Group lead to the sportscar project being cancelled. However Lola would continue on selling the cars to customers, offering continued technical support along with Advanced Engine Research. In the American Le Mans Series, KnightHawk Racing would leave, yet its place would be taken by a second Dyson Racing EX257. Both Dyson and Intersport would trade wins off during the entire season, with the EX257 winning every race that year to give Dyson the championship. Notably, the #16 Dyson entry, piloted by James Weaver and Butch Leitzinger, took an overall victory at the Infineon Raceway round, the first time an LMP675 car had pulled off the upset. However, Intersport made an unusual decision for the final round at Petit Le Mans, deciding to replace the turbocharged MG engine with a new naturally aspirated Judd KV675 V8. This move forced the team to make some mechanical changes to their car (now referred to as B01/60), but it was successful as the team managed to take the LMP675 win. Even with this perfect season for the EX257, Le Mans still saw problems. A single entry from Intersport failed to finish yet again, due to an engine failure after a mere 102 laps.

The ACO decided to alter the Le Mans Prototype rules due to the inherent problems of the LMP675 class. The classes were restructured into LMP1 and LMP2, and the MG's found themselves moved into the top LMP1 class. Over in Europe, Ray Mallock Ltd. would carry on the MG name in the new Le Mans Endurance Series. The car performed well over the short season, finishing all races and achieved a best finish of fifth, earning them fifth in the teams championship. In America, Dyson would continue with their two-car squad, while Intersport would continue with their Judd-powered entry. The success of the previous year could not be repeated, as Dyson was now in the same class as the dominant Audi R8. Although Dyson was able to score an overall victory against the R8s at Mosport, the team had to settle for second in the championship. Intersport's hybrid car failed to perform, managing to score points in only two races. For Le Mans, both Ray Mallock, Ltd. and Intersport would participate, yet once again neither car finished. Intersport's car was taken out in an accident, while RML's entry blew an engine in the closing hours of the race.

Following the dismal performance of Intersport's hybrid B01/60, the car was retired for 2005. This left only the two-car Dyson team in the American Le Mans Series, and RML in the Le Mans Endurance Series. However, RML had performance extensive modifications to their car during the off-season including the addition of a Judd XV675 V8 similar to Intersport's modification, leading to the new car being renamed the MG-Lola EX264. The car was now transferred to the LMP2 class, while Dyson's unmodified cars remained in LMP1. Dyson once again suffered against the R8s, although it did manage to take two wins over the season. The team had to once again settle for second in the LMP1 championship. In Europe, RML saw better performance against their LMP2 competition, including their first class victory at Istanbul Park. RML managed to finish second in the LMP2 championship behind Chamberlain-Synergy Motorsport. However the MG's greatest success came at Le Mans, with RML managing to not only score the car's first finish in the race, but also taking the LMP2 class victory by a mere four laps over a pair of Paul Belmondo Racing Courages.

For 2006, Dyson Racing decided that the old EX257 was no longer competitive, and purchased newer Lola B06/10s. The two former Dyson EX257s were sold to two teams, Highcroft Racing and Autocon Motorsports, who would compete in limited schedules in the American Le Mans Series. Highcroft would score the best result of the season, taking third place overall at Petit Le Mans. Meanwhile, Ray Mallock, Ltd. would continue to campaign their EX264, now using the old MG/AER turbocharged engine once again. Another single victory was achieved by the team at Donington Park, yet again leaving them with second place in the LMP2 championship. At Le Mans however, RML would repeat their success. Again taking the LMP2 class victory, this year they actually finished in eighth place overall, a mere 37 laps behind the overall winning Audi R10.

2007 would begin to see the end of the EX257. The final original car still in competition, Autocon Motorsport's entry, began the 2007 American Le Mans Series season. However following three rounds of racing, the team decided to buy a newer Creation CA06/H after the Grand Prix of Long Beach.