Mario Farnbacher (born 14 May 1992) is a German racecar driver who currently competes in the WeatherTech SportsCar Championship.[1] 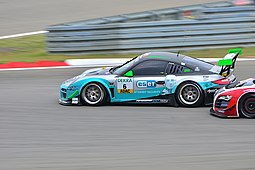 Farnbacher competing at the Nürburgring in 2012

With MSR's move to the DPi class for 2021, Farnbacher found himself initially without a ride. In January, however, it was announced that he would compete with Magnus Racing in their new Acura NSX GT3 at the 24 Hours of Daytona.[4] For the remainder of the WeatherTech Sprint Cup, beginning at Mid-Ohio, he joined Compass Racing, driving alongside Jeff Kingsley.[5] Following an injury suffered by Marc Miller prior to the round at VIR, Farnbacher also competed with Gradient Racing, finishing 15th in the GTD class following an accident.[6]

For the 2022 IMSA SportsCar Championship season, Farnbacher embarked upon a Michelin Endurance Cup-only campaign with Gradient Racing,[7] alongside a full-season effort in the GT World Challenge America with HPD Academy graduate Ashton Harrison.[8]