Mid-size—also known as intermediate—is a vehicle size class which originated in the United States and is used for cars larger than compact cars and smaller than full-size cars.[1] "Large family car" is a UK term and a part of the D-segment in the European car classification. Mid-size cars are manufactured in a variety of body styles, including sedans, coupes, station wagons, hatchbacks, and convertibles. Compact executive cars can also fall under the mid-size category. 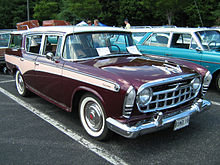 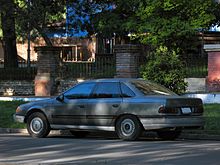