Nissan Motorsports International (ニッサン・モータースポーツ・インターナショナル株式会社, Nissan Mōtā Supōtsu Intānashonaru), abbreviated as Nismo, is a division of Nissan Motorsports & Customizing focused in motorsport and performance-oriented car models for Nissan. Nismo was initially a company, Nissan Motorsports International Co., Ltd. (ニッサン・モータースポーツ・インターナショナル株式会社, Nissan Mōtā Supōtsu Intānashonaru Kabushiki-gaisha), formed in 1984 as a result of a merger of two motorsport departments, being the in-house tuning, motorsports and performance subsidiary of Nissan. It has competed in JSPC, JTCC, the 24 Hours of Le Mans and the 24 Hours of Daytona. They currently participate in Super GT, GT Racing and Formula E. Nismo ceased to be a company in April 2022 by being merged with sister Autech into a new Nissan subsidiary, Nissan Motorsport & Customizing.

In 1984, Nissan decided that it wanted to merge its two motorsport divisions, founded through the 1960s, they were Oppama Works [ja] (known as Publication Division 3), based in its Oppama factory, responsible for the needs of privateer teams and Ōmori Works [ja] (Special Car Testing Division), within its Ōmori plant, responsible for its factory operations.[1] The company's intention following the merger was to specialize in sportscar racing, but it also provided support for teams competing in the domestic F3 series.[1]

In 1988, Nismo built its first car, the Saurus for motorsport use for its one-make series. The following year they developed the Skyline GT-R for racing as well as building the 500 evolution editions for road use.[1]

In December 2021, Nissan said it would merge Nismo and sister company Autech (a tuning and conversion operation) into a new company called Nissan Motorsports & Customizing Co., Ltd.. The merge was completed on April 1, 2022.[2][3]

Products include the GT-R, 370Z, Sentra, Frontier, and the Juke Nismo. Soon to be added to the range is the hatchback Nissan Pulsar Nismo and the electric Nissan Leaf[4]

Nismo designs and manufactures a range of aftermarket performance parts for Nissan cars including aerodynamics parts such as spoilers and diffusers, alloy wheels, engine and suspension parts. The 2017 Infiniti Q60, being much criticized for its mild exhaust sound, about six months after its introduction had a specially tuned Nismo muffler made available through Infiniti dealers as an aftermarket item.

Most Datsun, Nissan, and Infiniti branded cars have performance parts available from Nismo, either in production or as old stock. For example, Nismo sells parts such as unground cam billets, performance cams, pistons, etc. for the KA24E engine, which was used in the Nissan small pickup truck for several years and also used for the 1989 and 1990 model years of 240SX, a popular car among Import scene enthusiasts (especially Drifters) in North America.

In Japan, the V35 Skyline and Z33 Fairlady have both received several levels of Nismo tuning packages (E-Type, S-Tune, R-Tune, and S1 packages), with a full track spec Fairlady Z debuted at the 2005 Nismo Festival of Speed held at (formerly) Fuji International Raceway.

In February 2007, Nismo announced the launch of the Nismo 380RS. The Nismo 380RS is a factory modified version of the Nissan Z33 Fairlady Z tuned by both Nismo and Autech. Two versions were released, the first was a track-only model called the 380RS-C (C for competition), the second is a street model being sold at Nissan dealers. Both versions use a Nissan VQ series V6 engine, bored and stroked to 3.8L. The track-only 380RS-C makes 400 hp (298 kW), and the street version makes approximately 350 hp (261 kW). The Nismo 380RS was only sold in Japan.

The first Nismo-branded car was the 1987 Skyline R31 GTS-R Group A evolution special limited to 823 examples. This was followed by the 1990 Skyline GT-R Nismo of which only 560 were produced. Both cars featured weight-saving, aerodynamic, performance and reliability improvements necessary for the rigours of Group A competition.

Nismo was also responsible for the R33 Skyline 400R and S14 Silvia 270R models. Both featured comprehensive modifications to the drivetrain, suspension, brakes, chassis, and aero work. Very limited numbers of both models were sold in 1997, and both command high resale prices even today. These models stressed Nismo's link to street car tuning, and were developed (as was the Z-Tune GT-R) at their Chiba City tuning garage. Nismo street tuned vehicles have been sold at Nissan dealerships for years, and come with full warranties.

In the 1960s, Nissan competed in the Japanese Grand Prix sports car race.

A Nissan GTP ZX-Turbo being rolled out for Historic Racing. 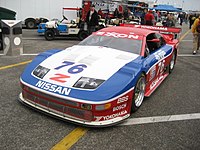 The Clayton Cunningham Racing 300ZX which won the 1994 24 Hours of Daytona. 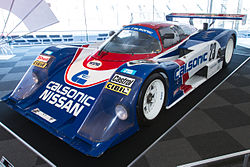 The Nissan R88C being displayed at the Nismo Motorsport Facility at the Suzuka International Racing Course in 2012. 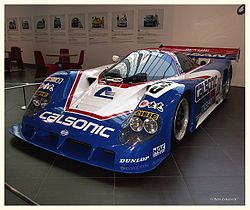 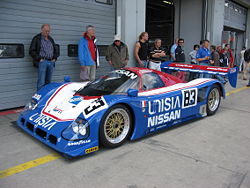 A Nissan R90CK at DAMC 05 Oldtimer Festival Nürburgring in June 2007.

In the 1980s and 1990s, Nissan raced at the All Japan Sports Prototype Championship and 24 Hours of Le Mans with sports prototypes such as the R88C, R89C, R90C and R391. They claimed the 1990, 1991 and 1992 JSPC titles, but they never won at Le Mans. Notable Nissan drivers in this era include Masahiro Hasemi, Kazuyoshi Hoshino, Masahiko Kageyama and Toshio Suzuki.

The CALSONIC R32 GT-R from the Group A series

From 2013 onwards Nissan competed in the Supercars Championship with Kelly Racing fielding four Nissan Altimas. The factory backing concluded at the end of 2018, although the Altimas continued to be privately entered in 2019.[6] 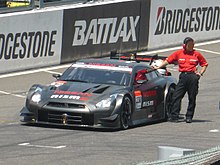 The second-generation Nissan GT-R at its first public presentation at the 2013 42nd International Pokka Sapporo 1000km. 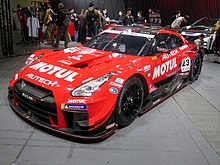 In 2009, Nissan entered the FIA GT1 World Championship with a Nismo-developed Nissan GT-R. Krumm and Lucas Luhr were 2011 drivers champions. Since 2011, Nismo has produced the GT-R GT3, which has competed in the Blancpain Endurance Series. Nismo has also developed production class Nissan GT-R cars for the 24 Hours of Nürburgring.

They also have a pool of drivers, known as the Nismo Global Driver Exchange. This allows factory drivers the chance to race in big events such as the Le Mans 24 Hours, the 24 Hours of Dubai and the Bathurst 12 Hour. 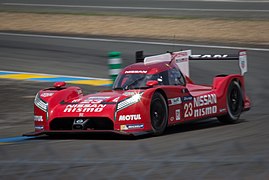 From 2011 to 2016, Nissan is involved in the FIA World Endurance Championship and European Le Mans Series as a LMP2 engine supplier. They have had success with Greaves Motorsport, Signature Team, OAK Racing, TDS Racing, G-Drive Racing and SMP Racing. In 2017, Nissan entered the DPi class of the WeatherTech SportsCar Championship with Extreme Speed Motorsports.

Nissan announced in June 2014, that Nismo will enter the LMP1 category to fight for the FIA World Endurance Championship against Audi, Toyota and Porsche.[7] Following a disappointing performance in the 2015 24 Hours of Le Mans, the program's remaining schedule in 2015 was pushed back, with the team intending a regular rebut in the 2016 season;[8] however on 22 December 2015, Nissan announced that it was shuttering the program altogether.[9]