The VK engine (formerly known as the ZH) is a V8 piston engine from Nissan. It is an aluminum DOHC 4-valve design.

The VK engine was originally based on Nissan's VQ V6 rather than the VH V8 used in previous Q45/Cima models. Changes include: a variable intake manifold, newly designed heads, and a larger drive by wire throttle chamber. The intake manifold directs air through different paths at different engine speeds to optimise low-end torque or high-end horsepower.

A flat-plane crankshaft version of the VK45DE was used by Nismo for Super GT races with the Nissan GT-R instead of using the GT-R's VR38DETT twin-turbo V6 engine.[1] The VK45DE was previously used in Nissan's 350Z Super GT car in 2007, replacing the previous VQ30DETT used in that car. In race trim, the Super GT VK45DE produces 500 PS (368 kW; 493 hp) and 52 kg⋅m (510 N⋅m; 376 lbf⋅ft) of torque.[2] The engine idles at around 3,500 rpm and is restricted to the above specified power output. Without such restrictions, the engine is reputedly capable of producing nearly 800 PS (588 kW; 789 hp).[3] Nismo reasons that by using the engine, they eliminate turbo lag, save weight and generally prefer the torque curve of the atmospheric V8. 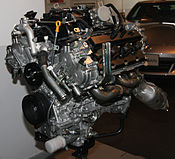