Panoz is an American manufacturer of sports automobiles founded in 1989 as Panoz Auto Development by Dan Panoz, son of Don Panoz. Panoz products have included the Panoz Roadster and AIV Roadster, the Panoz Esperante, and the Panoz Avezzano.

Since 1997, Panoz cars have competed in racing series around the world. Team Panoz Racing race the Panoz Avezzano in the Pirelli GTS class, and in 2018 won the Manufacturer's Championship. In addition to Le Mans series wins, an Esperante GTLM won the GT2 class at the 2006 24 Hours of Le Mans and in the same year, won the 2006 12 Hours of Sebring and was on the podium at the endurance season finale, 2006 Petit Le Mans. For the 2007 American Le Mans season, Panoz contracted longtime BMW Motorsport partner Prototype Technology Group to campaign the GTLM in the ALMS and Le Mans. Panoz has also provided IndyCar with the G-Force GF05 and GF09; and the Champ Car World Series with their final race car, the Panoz DP01 which was the final chassis used under ChampCar until the unification of the American open wheel series in road racing. 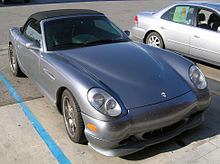 The American Le Mans Series (ALMS) was created by Don Panoz in 1999. Panoz also owned the International Motor Sports Association, the organization that sanctions the ALMS. It held its inaugural event, the 1998 Petit Le Mans as part of the Professional Sportscar Racing series. The ALMS has a partnership with the Automobile Club de l'Ouest, the organizers of the 24 Hours of Le Mans, to allow teams to compete to the same regulations. In 2012, the ALMS was sold to NASCAR and then in 2014, the series merged with the Rolex Sports Car Series to form United SportsCar Racing.[2]

The Panoz Racing School was a driver training school previously operated at Road Atlanta and Sebring International Raceway. Students learned racing techniques in purpose-built Panoz GT-RA cars. Following completion of the course, students were eligible for an SCCA regional racing license. The school also included programs where customers could receive instruction in their own road cars.

The Panoz Racing Series was a one-make series made up of the Panoz School cars, as well as the more powerful Panoz GTS models. The series was designed for amateurs to learn racing in a low-cost environment.