Born in Aldeia Galega da Merceana, Alenquer, Portugal, Lamy graduated from karting and won the Portuguese Formula Ford Championship in his debut year, in 1989, at the age of 17. Taking on Domingos Piedade as a manager, Lamy moved to Formula Opel Lotus and won the championship in his second attempt, in 1991.[citation needed]

With Piedade's help, Lamy went to Germany to race in the local Formula Three series. Signing for Willi Weber's team, he defeated Marco Werner in the fight for the Championship, in 1992, also winning the Marlboro Masters in Zandvoort and finishing second in the Macau Grand Prix. In 1993 he raced for Crypton Engineering in Formula 3000 and finished second in the series, one point behind champion Olivier Panis, although he scored a win at Pau, a narrow street course considered even more difficult than Monaco.[citation needed] 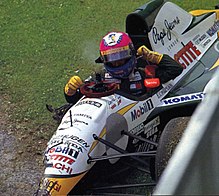 Pedro Lamy during free practice of the 1996 San Marino Grand Prix while racing for Minardi.

In 1993, Lamy got the chance to race in the final four Formula One races of the season, replacing injured Alessandro Zanardi in the Lotus team. He scored no points, but was signed for the team to drive the full 1994 season. Lamy drove the first four races, before suffering a serious crash in private testing at Silverstone, breaking both legs and wrists and sitting in the sidelines for over a year.[1]

After intense physical therapy, Lamy signed a contract to race in the second half of the 1995 season for Minardi, replacing Pierluigi Martini, and scoring the team's only point of the season in Adelaide, despite a spectacular spin and struggling to get going again halfway through the race. Lamy stayed with Minardi for 1996, but the team's lack of resources meant the car received little development, and the Portuguese driver finished his F1 career, after 32 Grand Prix starts.[citation needed]

Afterwards, Lamy moved to the FIA GT Championship, where he won the GT2 class in 1998 in an Oreca Chrysler Viper GTS-R. He then raced in the Le Mans 24 Hours and the DTM for the works Mercedes team, but was unhappy with his treatment within the team.

In 2005, Lamy was announced as the driver of A1 Team Portugal in the 2005 A1 Grand Prix. However, Lamy never went beyond testing, and Álvaro Parente was appointed the main driver's seat. Instead, Lamy remained with the Aston Martin Racing squad, taking part in the American Le Mans Series and 24 Hours of Le Mans. In 2007, Lamy became a factory driver for the Peugeot 908 HDi FAP in the Le Mans Series, as well as driving the diesel-powered prototype in the 24 Hours of Le Mans. Lamy became LMP1 champion in the LMS in the first season.

In 2010, driving for BMW Motorsport, he won the 24 Hours Nürburgring for the fifth time, to tie with Marcel Tiemann for the most wins at the race. In 2012, Lamy participated in the FIA World Endurance Championship, driving a Larbre Competition Corvette C6.R in GTE-Am.

As of June 2022, he is a FIA (Fédération Internationale de l'Automobile) commissioner.

† Not eligible for points