Martini driving for Minardi at the 1985 European Grand Prix.

Martini's uncle, Giancarlo Martini, raced during the 1970s, including some non-championship races in a Ferrari 312T entered by Scuderia Everest, a team owned by Giancarlo Minardi. Pierluigi's younger brother, Oliver, is also a racing driver.[1]

Martini participated in 124 Formula One Grands Prix, debuting on 9 September 1984, driving for Toleman in place of suspended Ayrton Senna at the 1984 Italian Grand Prix. He scored a total of 18 championship points and was synonymous with the Minardi team (run by the same Giancarlo Minardi who had previously owned Scuderia Everest).

Martini driving a Minardi M194 at the 1994 British Grand Prix

Martini driving a Minardi M195 at the 1995 British Grand Prix 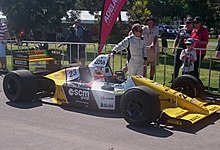 Martini and a Minardi M189 at the 2016 Adelaide Motorsport Festival

Indeed, aside from a single outing with Toleman and a one-season dalliance with Scuderia Italia in 1992, Martini's entire Formula One career was spent with the Italian outfit. He raced with the minnow team in three different stints, drove for them on their debut in 1985, scored their first point in the 1988 Detroit Grand Prix, and their only front-row start at the 1990 United States Grand Prix (where unexpected rain on Saturday meant that the grid was decided entirely by times from Friday's session. Pirelli's soft qualifying tyres caught Goodyear off guard, and the Italian manufacturer put five of its teams in the top ten positions). Both Martini and Minardi led a race for a single lap at the 1989 Portuguese Grand Prix, and their joint-best finish was 4th at the 1991 San Marino Grand Prix and 1991 Portuguese Grand Prix, the latter being Martini's single finish on the lead lap.[2] Initially out of a drive for 1993, he was recalled back to the little Italian team midway through the season in place of Fabrizio Barbazza, Martini impressed by outpacing his young team mate Christian Fittipaldi.

Martini was also one of the drivers with a reputation for ignoring blue flags. Examples given are the 1991 Monaco Grand Prix when he held up Emanuele Pirro in the Dallara, Stefano Modena in the Tyrrell, and Riccardo Patrese in the Williams for several laps despite running towards the back of the field, and the 1995 Canadian Grand Prix where he blocked Gerhard Berger in the Ferrari when the Austrian tried to lap him. On both occasions Martini was called in for a 10-second stop and go penalty for ignoring blue flags. Quizzed about this attitude on the occasion of the 1995 San Marino Grand Prix, where he held up winner Damon Hill, Martini replied: 'What should I exactly apologise for? My trajectories are always clean. Should I just park the car on the grass? I'm here to do my race like anybody else. I've always been correct. Those who complain about my conduct should explain why they cannot overtake me when their car has at least 150 hp more than mine'.[3]

Prior to commencing his Formula One career, Martini drove a Lancia LC2 in the 1984 24 Hours of Le Mans. After leaving Formula One, he began a successful career in sportscar racing. He contested the 1996 24 Hours of Le Mans in a Porsche run by Joest Racing. 1997 brought a fourth-place finish in a Porsche 911 GT1 which he also raced in the FIA GT Championship that year. In 1998, he joined the brand new Le Mans program of BMW Motorsports.

In 1999, Martini, Yannick Dalmas and Joachim Winkelhock won the Le Mans 24 Hours.[1] The trio drove for BMW. The team had to fight both Toyota and Mercedes works cars and won the race by a lap from the runner-up Toyota.

Martini returned to motorsports in 2006, competing in the Grand Prix Masters series for retired Formula One drivers.