Pirelli & C. S.p.A. is a multinational tyre manufacturer based in Milan, Italy. The company, which has been listed on the Milan Stock Exchange since 1922,[5] is the 6th-largest[6] tyre manufacturer and is focused on the consumer production of tyres for cars, motorcycles and bicycles. It is present in Europe, the Asia-Pacific, Latin America, North America and the Post-Soviet states, operating commercially in over 160 countries. It has 19 manufacturing sites[7] in 13 countries and a network of around 14,600 distributors and retailers.[8] In 2015, China National Chemical Corp. Ltd. (ChemChina) took controlling interest of Pirelli - with the Chinese state-owned company agreeing to maintain the tire company's ownership structure until 2023.

Pirelli has been sponsoring sport competitions since 1907 and is the exclusive tyre partner and supplier for the Grand-Am Rolex Sports Car Series for 2008–2010, FIA Formula One World Championship for 2011–present and for the FIM World Superbike Championship.[9] Pirelli's headquarters are located in Milan's Bicocca district.

Pirelli is now solely a tyre manufacturing company. In the past it has been involved in fashion and operated in renewable energy and sustainable mobility.

On 4 October 2017, Pirelli returned to the Milan Stock Exchange[10] after focusing its business on pure consumer products (tyres for car, motorcycles, and bicycles) and related services, and separating the business of industrial tyre.[11]

Pirelli's eponymous calendar has been published since 1964, and has featured the contributions of many famous photographers over the years such as Helmut Newton, Steve McCurry, Peter Lindbergh, Richard Avedon, Bruce Weber, Herb Rits and Annie Leibovitz.

The company's US-based headquarters are located in Rome, Georgia. This city was chosen due to Pirelli's Italian heritage, as the city is named after Rome.[citation needed] 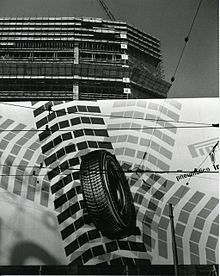 The Pirelli Tower in Milan in 1958, during construction, photographed by Paolo Monti

Founded in Milan in 1872 by Giovanni Battista Pirelli (1848–1932), the company initially specialised in rubber and derivative processes and also made scuba diving rebreathers.[12] Thereafter, Pirelli's activities were primarily focused on the production of tyre and cables (for energy and telecommunications). In 2005, Pirelli sold its cable division to Goldman Sachs, which changed the new group's name to Prysmian.

In the 1950s, Alberto Pirelli commissioned the building of a skyscraper, Pirelli Tower, in the same Milanese area that housed the very first Pirelli factory during the 19th century.[13]

In 1974, Pirelli invented the "wide radial tyre", upon a request from the Lancia rally racing team for a tyre strong enough to withstand the power of the new Lancia Stratos. At that time, racing tyres were either slick tyres made with the cross ply technique (very wide tyres with a reduced sidewall height), or radial tyres, which were too narrow to withstand the Stratos' power and did not provide enough grip. Both were unusable for the Lancia Stratos, as the radials were destroyed within 10 km, and the slicks too stiff. Lancia asked Pirelli for a solution, and in 1975 Pirelli created a wide tyre with a reduced sidewall height like a slick, but with a radial structure.

In 1988, Pirelli acquired the Armstrong Rubber Company, which was headquartered in New Haven, Connecticut, for $190 million.[14]

In 2000, Pirelli sold its terrestrial fibre optic cables business to Cisco and its optical components operations to Corning, for 5 billion euro.[15] It invested – through Olimpia -part of the resulting liquidity to become a majority shareholder in Telecom Italia in 2001,[16] maintaining this position until 2007.[17]

In 2002 the company started a range of Pirelli branded clothing, watches and eyewear.[18]

In 2005, Pirelli sold its Cables, Energy Systems and Telecommunications assets to Goldman Sachs[19] and the newly formed company was named Prysmian. In the same year, 2005, Pirelli opened its first tyre production plant in Shandong province, China.[20] This was the beginning of the group's production complex in the country.

In 2006, Pirelli chose Slatina for its first tyre production plant in Romania, expanding the facility in 2011.[21]

In 2010, Pirelli completed its conversion to a pure tyre company by selling Pirelli Broadband Solutions[22] and spinning off the real estate assets of Pirelli Re.[23] Fondazione Pirelli was established in the same year to safeguard and celebrate the company's past and to promote business culture as an integral part of Italy's national cultural assets.

In March 2015, it was announced that Pirelli shareholders had accepted a €7.1 billion bid from ChemChina, together with Camfin and LTI, for the company.[24] The transaction was completed and the company was delisted in November 2015.[25]

In May 2017, it was announced that Pirelli returns to the world of cycling with a new road cycling tyre range, P ZERO Velo.[26]

In September 2017, the company announced its intentions to sell up to 40 percent of its equity capital in an initial public offering as it plans to return to the Milan stock exchange in October.[27]

In 2021 Pirelli introduced 18-inch tyres for the new aerodynamic and technical changes for 2022 in Formula One.[28]

*The performance takes into account, as well as the deconsolidation of Venezuela, a non-recurring fiscal impact of 107.6 million euro linked to the devaluation of active deferred taxation by the Parent Group as a consequence of Pirelli's new financial status after its merger with Marco Polo Industrial Holding.

The Pirelli Internetional Award is given annually for the best international multimedia involving the communication of science and technology conducted entirely on the Internet.

"Power is nothing without control" was the well known slogan of Pirelli Tyre Company, and was featured in numerous television and print advertisements.[33]

Pirelli is the long-serving main sponsor of Italian football club Inter Milan, having sponsored the Italian team since the 1995–96 season.[34]

Pirelli has a history of sponsoring football teams. Pirelli is well known for its long term primary sponsorship of the Italian football club Inter Milan between 1995 and 2021. Pirelli previously appeared as a sponsor on the shirts of the Maltese football club Valletta for a short time.

In reference to Brazil striker Ronaldo’s usual goal celebration of both arms outstretched, Pirelli ran a 1998 commercial in which he replaced the figure of Christ from the Christ the Redeemer statue that towers over his home city of Rio de Janeiro while in an Inter Milan strip.[35] It was controversial with the Catholic Church.[36]

Pirelli's sponsorship of football teams is not limited to Europe, South America is a key market and as a result successful clubs have also been sponsored by the tyre company. The Brazilian team Palmeiras, Uruguayan team Peñarol and Argentinian side Vélez Sársfield all had Pirelli as a shirt sponsor.

When English football club Burton Albion Football Club built their new stadium in 2005, Pirelli became the title sponsor of the new ground. This was because the new stadium, named Pirelli Stadium lies next to the Pirelli factory in Burton-upon-Trent, Staffordshire, England.

In 2012, the company became a major sponsor of the Russian Cup.

Pirelli is currently the event title sponsor of the Spanish and Hungarian Grands Prix and sponsored the 2018 French Grand Prix.

The company was the title sponsor of the Pirelli World Challenge from 2011 to 2018.

Pirelli supported rally with their FIA Pirelli Star Driver program as an initiative to support young rally drivers.[37] It was the sole supplier in the top tier of World Rally Championship in 2008–2010, and is now a co-supplier with Michelin. Since its first involvement in WRC in 1973, the manufacturer won 181 events, and produced 25 WRC Driver Champions including Colin McRae (1995), Petter Solberg (2003), Sebastien Loeb (2008-2010).[38]

Pirelli would again become the sole tyre supplier in all three tiers in 2021.[38]

Pirelli is also a sponsor of rally and gymkhana driver Ken Block's Hoonigan Racing Division since 2010.

Pirelli sponsors Alpine World Ski Championship and Ice Hockey World Championship IIHF from 2017 to 2021.[40] The company is also sponsor of the Italian Ski Team and of the Swiss Ski Team.[41]

Pirelli were also the official tyre partner and supplier of the World Rally Championship from 2008 to 2010, until the company withdrew to focus on its Formula One commitments. Pirelli returned to the championship in 2014, however only partnering tyres for a few private teams as Michelin was the major tyre partner and supplier. Pirelli stepped up their involvement in the championship when they signed a deal to supply tyres to all Junior WRC participants, with its champions receiving a Ford Fiesta R5 with free tyres, fuel and free rally registration package for the next season's World Rally Championship-2.[45] Pirelli subsequently returned full time to the WRC since 2021 season.[46]

Pirelli was also partnered Grand-Am Rolex Sports Car Series from 2008 until 2010 before being replaced by Continental AG in 2011.

The Italian tyre manufacturer introduced a colour coding system to help identify the tyre compounds used by drivers during races. Each compound has its own colour, which appear on the sidewalls of the tyre.

Since the 2019 season, Pirelli has used three colours to identify its dry-weather P Zero tyres: white for hard, yellow for medium, and red for soft. As well as the dry-weather slick tyres, there are two wet-weather grooved tyres: green for the intermediate and blue for the full wet. These tyres are branded Cinturato, a name that dates back to the 1950s.

At the start of Pirelli's Formula 1 tenure in 2011, the company was given the technically challenging task of designing tyres that degraded rapidly in order to promote more pit stops and overtaking,[49] with the aim of making the races more exciting and entertaining. However, the brief from the sport's organisers has changed over the years, as the cars themselves evolved with the introduction of the turbo hybrid era from 2014.

Pirelli has also faced controversy on a number of occasions in Formula 1, especially during the 2013 British Grand Prix, which featured multiple tyre failures. Pirelli subsequently changed the construction of the tyres to prevent further incidents, switching to Kevlar belts.[50]

At the 2015 Belgian Grand Prix, a tyre on Sebastian Vettel's Ferrari suffered from a blowout at 200 mph (322 km/h). Immediately after the race Pirelli claimed that excessive wear caused the blowout but following a more detailed analysis the company said that in fact a cut had caused the tyre failure.[51]

A number of major changes to the Formula 1 tyres were introduced for the 2017 season. The most obvious visual difference was an increase of width by 25%, both front and rear, increasing from 245mm to 305mm at the front and 325mm to 405mm at the rear. The actual rim size remained unchanged from the traditional 13 inches.

The faster cornering speeds as a result of this change imposed significantly increased loads on the tyres. Pirelli was consequently asked to produce tyres with less degradation that were more resistant to overheating, for the fastest cars in Formula 1 history.[52]

A far-reaching alteration to the Formula 1 technical regulations for 2022, covering every aspect of the car, prompted another significant change to the tyres. With an imminent move to 18-inch rims after more than 50 years of the 13-inch size,[53] Pirelli's 2022 tyres maintain the same tread width as before, but diameter has increased from 660 millimetres to 720 millimetres. The sidewall height is also reduced to give the tyres a more modern low-profile look.

In April 2012, Pirelli & C. SpA signed joint venture agreement with Indonesian counterpart PT Astra Autoparts a subsidiary of PT Astra International for the construction of a motorcycle tyre plant with a total investment of $120 million. 60 percent shares will be held by Pirelli. Pirelli hoped to strengthen its presence in the largest motorcycle market in the world, the Southeast Asia region which has 250 million motorcycles.[54]

In July 2018, Pirelli launched a F1 wheel shaped Bluetooth speaker, P Zero Sound.[55] The Bluetooth speaker measures 12.9-inches in diameter, weighs 21 pounds and has a 100-watt amplifier, a 100mm midwoofer, a 25mm tweeter and also offers Bluetooth 4.0 with AptX for wireless connectivity. IXOOST[56] is the manufacturer of P Zero Sound speaker, which majorly manufactures Motorsports-themed audio systems. The wheel shaped speaker costs €2400, which is equivalent to about $2,800.