Due to the use of high-strength steel, aluminium and some composites, the weight was reduced to 1,380 kg (3,042 lb) for the manual Carrera, rising to 1,605 kg (3,538 lb) for the all wheel drive Turbo model if equipped with the PDK transmission (Porsche Doppelkupplung). PDK is available as an option for all 911 Carrera and 911 Turbo (991.1 Non S) models as a 7-speed transmission, featuring manual and automatic modes. Gears 1 to 6 have a sports ratio and top speed is reached in 6th gear. 7th gear has a long ratio and helps to reduce fuel consumption by keeping engine revs low. The PDK is essentially two gearboxes merged into a single unit and thus requires two clutches. For all 991 models, the PDK is produced by ZF Friedrichshafen. The auto start/stop function is standard on all variants of the 911 Carrera.

The convertible variant of the 991 was announced in both Carrera and Carrera S versions at the LA Motor Show in November 2011.[5]

In September 2012 at the Paris Motor Show, the all-wheel-drive variants, the Carrera 4 and 4S, were added to the 991 lineup.

The Club Coupe was introduced to celebrate the 60th anniversary of the Porsche Club of America. Just 60 Club Coupes were produced for the 2016 model year.[7] Notable changes from the standard GTS include 20" alloy wheels (the same as those found on the 2014 50th Anniversary Edition) which pays homage to the "Fuchs"-style wheels on classic 911s, special "Club Blau" exterior paint,[8] SportDesign bodywork, and a "ducktail"-style spoiler which references classic motorsports-oriented 911s, for example the Carrera RS 2.7. The interior features Club Coupe-specific dashboard trim, door sills, and center console lid.[9]

The Club Coupe had an MSRP of $136,060 excluding destination fee and was only available to Porsche Club of America members.[10]

Cosmetically, the 50th Anniversary Edition featured the wider body of the Carrera 4S,[13] 10mm lower suspension,[14] special 20" alloy wheels which reference the iconic Fuchs wheels on classic 911s,[15] chrome trim across the body including the vents on the rear engine cover and window trim, standard SportDesign side mirrors, and a special "911 50" rear badge. Three colors were available: Geyser Grey, Graphite Grey, and black monochrome.[16] On the interior, the 50th Anniversary Edition has vintage-style green instrument dials, white instrument dial needles, retro "houndstooth" seat inserts, and a badge on the trim above the glovebox commemorating the special edition and listing the production number of the vehicle.

At the Detroit Motor Show in January 2014, Porsche introduced the Targa 4 and Targa 4S models. These new derivatives come equipped with an all-new roof technology with the original targa design, now with an electronically operated soft top along with the original B-pillar and the glass 'dome' at the rear.

On 12 January 2015, Porsche announced the 911 Targa 4 GTS at the North American International Auto Show in Detroit. Similar in appearance to the existing Targa 4 and 4S models, the GTS added the 430 PS (316 kW; 424 bhp) engine plus several otherwise optional features.[20]

The GT3 variant was added to the 991 line up at the 2013 Geneva Motor Show equipped with Porsche's new active rear wheel steering. The system is claimed to provide higher lateral dynamics than previously available by the manufacturer. Car speed inputs determine whether the rear wheels steer in the same or opposite direction of the front wheels. It is the first GT3 model to be offered with an automatic transmission.

At the start of 2014, deliveries of the GT3 were halted following two incidents of the car catching fire.[21] A subsequent recall to replace the engines of all 785 cars manufactured at that time was announced in March 2014 before production of the GT3 would restart.[22]

Porsche launched the RS version of the 991 GT3 at the Geneva Motor Show in 2015.[23] Compared to the 991 GT3, the front fenders are now equipped with louvers above the wheels and the rear fenders now include intakes taken from the 911 Turbo, rather than an intake below the rear wing. The roof is made from magnesium. The interior includes full bucket seats (based on the carbon seats of the 918 Spyder), carbon-fibre inserts, lightweight door handles and the Club Sport Package as standard (a bolted-on roll cage behind the front seats, preparation for a battery master switch, and a six-point safety harness for the driver and fire extinguisher with mounting bracket). 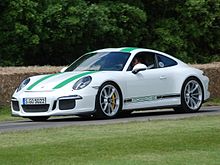 Unveiled at the 2016 Geneva Motor Show on 1 March, the 911 R shares most of its underpinnings with the GT3 RS, but does not include the roll cage, rear wing, and associated bodywork for a weight saving of 50 kg (110 lb). The 911 R comes only with a 6-speed manual transmission, and has a top speed of 323 km/h (201 mph) due to a lower drag coefficient as compared to the GT3 RS. It also offers additional options including a lighter flywheel and removal of the air conditioning and audio systems. Production was limited to 991 examples, as a 2016 model.[24]

The Turbo Cabriolet and the Turbo S Cabriolet were introduced in early 2013.

Following an introduction at the 2015 Frankfurt Motor Show, the 991 received a mid-cycle facelift for the 2016 model year. The updated Porsche 911 (at Porsche internally referred to as 991.2 or 991 II) introduced new styling including updated front and rear bumpers, new dual exhaust pipes along with new head and tail lights and options, along with all new, 3.0-litre twin-turbocharged flat-six engines across the range. This marked the first time the base 911 models had turbocharged engines.

Initially from October 2015, available models were the coupé and cabriolet versions of Carrera and Carrera S. The all-wheel drive versions Carrera 4 and 4S were unveiled in December 2015. 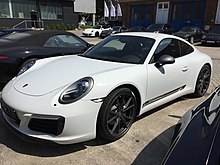 In January 2017, five new GTS versions (RWD coupé and cabriolet as well as AWD coupé, cabriolet and Targa) were launched.[29] 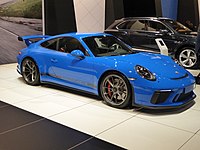 In late September 2017, the GT2 RS set a 6:47.3 lap time around the Nürburgring, which made it the fastest Porsche road car lap time recorded on the track at the time.[33] 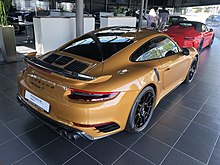 In December 2015, Turbo and Turbo S versions were launched. In June 2017, the Turbo S Exclusive Series with powerkit and CFRP body panels was launched, limited to 500 units. Braided carbon-fibre wheels were available as option.[34][35]

At the Porsche Rennsport Reunion VI held in September 2018, Porsche unveiled a limited edition track-only special paying homage to the legendary 935 race car. Based on the GT2 RS, the new 935 is designed to look like the 935/78, better known as the "Moby Dick" and features carbon fibre body work and an elongated "whale tail" rear section giving the car a total length of 4,865 mm (191.5 in) and width of 2,034 mm (80.1 in), making the car larger in terms of dimensions than the donor car. Wheelbase has been increased to 4,457 mm (175.5 in). Other changes include a large 1,909 mm (75.2 in) wide and 400 mm (15.7 in) deep rear wing, LED headlights mounted in the lower air intakes beneath the "flatnose" front body work, "turbine aero" wheels, the carbon-fibre racing steering wheel from the 911 GT3 R, adjustable wing mirrors from the 911 RSR, a full roll-cage in the interior, a racing bucket seat from RECARO with six-point racing harness, a lightweight lithium ion battery, a 115-litre FIA FT3-approved safety fuel cell with fuel cut-off safety valve, a fire extinguisher and an air jack system. With the changes and additions the car weighs in at a total of 1,380 kg (3,042 lb).

The 3.8-litre twin-turbocharged flat-six engine as used on the GT2 RS is untouched and generates 700 PS (515 kW; 690 hp). Power is sent to the rear wheels via a 7-speed dual clutch transmission with dual mass flywheel. The car retains ABS and Porsche Electronic Stability Management System including a full defeat mode. Unlike most racing cars air conditioning is standard-equipment. A passenger seat as well as a Martini sponsor-livery inspired by the original 935/78 are available as an option.

At the 2018 Paris Motor Show held in October on the occasion of the 70th anniversary celebration of the marque, Porsche unveiled the Speedster variant of the 991 generation for the 911, as a concept. Utilising the chassis of the GT3 and the body shell of the Carrera 4 Cabriolet, the Speedster sports a 4.0-litre naturally aspirated flat-six engine with a maximum power output of 500 PS (368 kW; 493 hp) and a red-line of 9,000 rpm coupled with a 6-speed manual transmission, which is claimed to be 4 kg (9 lb) lighter than the 7-speed manual transmission found on the standard 991 models, and a titanium exhaust system. The car also features the signature "hump" shaped double bubble roof cover along with a shorter windshield frame, side window glass and the analogue roof folding mechanism retaining the "Talbot" wing mirrors and the central fuel cap from the 911 Speedster concept unveiled earlier at the Goodwood Festival of Speed harking back to its use on the 356 Speedster. Other highlights include a leather interior with perforated seats, red tinted daytime running lights, carbon fibre fenders, engine cover and hood and stone guards. Production will begin in the first half of 2019[38] and be limited to 1,948 units in honour of the year in which the 356 "Number 1" gained its operating license.[39]

The final production version of the Speedster was unveiled at the 2019 New York Auto Show in April and dropped the "Talbot" wing mirrors in favour of standard 991 wing mirrors and announced to be available for sale in May 2019.[40] The engine adopted from the GT3 is equipped with individual throttle bodies and a new fuel injection system and develops 510 PS (375 kW; 503 hp) at 8,400 rpm and 470 N⋅m (347 lb⋅ft) at 6,250 rpm. The exhaust system is claimed to be 10 kg (22 lb) lighter despite the addition of two petrol particle filters. The car is equipped with carbon-ceramic brakes (PCCB) as standard, a Heritage Design Package is available as option.[41]

Porsche Design 911 Soundbar Final Edition, a series of 50 speakers that uses the exhaust system of 991 series of 911 GT3, was sold via local Porsche Centre.[46]