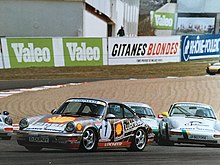 Porsche Carrera Cup race at the Norisring in 2015

There are three distinct tiers of racing, the top tier is the Porsche Supercup. Today the Supercup races as part of the support program of the FIA Formula 1 World Championship on most, if not all, of the Grands Prix held in Europe, and occasionally Grands Prix in Asia and North America. Established in 1993, it is the most prestigious one-make series for GT cars.

The second tier are the national Carrera Cups, held in Australia, France, Germany, Italy, Japan and the United Kingdom as well as International Carrera Cups held across multiple nations in eastern Asia and in the Scandinavian nations of Denmark, Finland, Norway and Sweden. The longest running is the Porsche Carrera Cup Germany, which was also the original series, first held in 1986 using the Porsche 964 Cup racing car. Now in its 36th year it has been one of the world's best known Pro-Am GT series and helped to progress many future World Endurance Champions, Le Mans winners and today is the primary feeder for the Porsche Supercup with many racing teams contesting both series. The Porsche Carrera Cup France began just a year later in 1987. The early 2000s saw a proliferation of Carrera Cups with Great Britain, Australia, Asia and Scandinavia all starting in a four-year burst with Italy following in 2007.

The third tier is the Porsche GT3 Cup Challenge or Porsche GT3 Cup Trophy, recently renamed in some markets as the Porsche Sprint Challenge. This is a mixture of smaller series in Europe, Switzerland based series, Benelux series held across Belgium, the Netherlands and Luxembourg, a Central European series, a Middle East series in the Gulf States, as well as larger series in the Americas; United States, Brazil and Argentina. As well as New Zealand and some which act as a second tier series within Carrera Cup nations. Some GT3 Cup Challenge series will use older Carrera Cup cars from previous generations of the Porsche 911. New Zealand and Australian GT3 Cup Challenges use second hand cars from Carrera Cup Australia series as an example, although largers series, particularly United States and Brazil are effectively Carrera Cups. GT3 Cup Trophies are essentially second tier GT3 Cup Challenges. Superseded Carrera Cup and GT3 Cup Cars have also become popular cars to race in domestic GT series on five continents.

The one-make GT series model has also been used for other Porsche models, usually the entry level Porsche of the time, 924, 944, 968 and Boxster and has proliferated to other manufacturers as well; Ferrari Challenge, Lamborghini Super Trofeo, Trofeo Maserati, Audi R8 LMS Cup, Lotus Cup, MGF Trophy and a multitude of series based on the Mazda MX-5.