Skip to content
Family holiday resort in Spain
Not to be confused with PortAventura Park.

PortAventura World is an entertainment resort in Salou and Vila-seca, Tarragona, on the Costa Daurada in Catalonia, Spain. It was built around the PortAventura Park theme park, which attracts around 3.5 million visitors per year, making it the most visited theme park in Spain and the sixth most visited theme park in Europe.[4] The resort includes a second theme park, Ferrari Land, since 2017 and also includes PortAventura Caribe Aquatic Park, five hotels, a convention centre and an RV park. It is the biggest resort in the south of Europe which attracts around five million visitors per year. Reus Airport lies within 15 minutes driving distance and Barcelona Airport within one hour.[5] The train station Salou - Port Aventura is 750m from the resort entrance, and is served by line R17 trains to Barcelona and Tarragona.

In 2002, a water park (Costa Caribe) and two hotels (Hotel PortAventura and Hotel El Paso) were constructed, and the resort was further rebranded as 'Universal Mediterranea'.[14][15] In 2004, NBCUniversal (Universal Studios' parent) sold all interest in PortAventura.[16] It is owned and operated by La Caixa banking group's investment vehicle Criteria, but as of 2005 the Universal name has been dropped from the branding, and the resort was once again named 'PortAventura' (the space in the name is deliberately left out for trademark reasons). In 2009, the resort hosted 3,310,000 visitors.[17]

In December 2013, private equity firm KKR[18] picked up 49.9% stake in PortAventura from Investindustrial, which still owned 50.1%. In 2016 the resort was renamed as 'PortAventura World Parks & Resort'.[19] The second theme park, Ferrari Land, was inaugurated on 7 April 2017.[20] PortAventura Dream Village, an exclusive vacation for guests with additional needs, opened in 2017.[21]

The park features five theme areas based on civilizations (Mediterrània, Far West, México, China and Polynesia), and one theme area based on Sesame Street. Mediterrània is the main entrance area of the park.

InvestIndustrial and Ferrari signed a deal to build a new area themed to the Italian sports car brand in the PortAventura resort covering 60,000 m2,[26][27] including new rides, restaurants, shops and car racing simulators. Ferrari Land is the resort's second theme park, separate from PortAventura Park. Its entrance is adjacent to PortAventura Park's main entrance. The Mediterranean theme is common to both entrances, as Ferrari Land is inspired by Italy, including recreations of Venice's Piazza San Marco and Rome's Colosseum. The main ride of Ferrari Land is a 112 m tall vertical accelerator coaster that surpassed Shambhala as the tallest coaster in Europe and is also the fastest coaster in Europe. The park was opened on 7 April 2017, after an investment of more than €100 million.[28] Ferrari Land opened a kids area in 2018.

Ferrari Land is the second amusement centre themed to Ferrari in the world, after Ferrari World Abu Dhabi.[29] 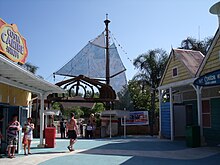 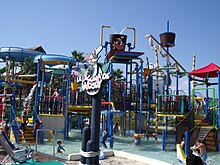 PortAventura Caribe Aquatic Park is a water park which is adjacent to PortAventura Park. It has an area of 50,000 m2, which includes 16 attractions and slides, as well as over 8,500 m2 of water-covered surface area. It is themed to the Caribbean, with beaches, palm trees, and Latin and reggae music, and it also includes shops and restaurants.

The park has been closed due to the coronavirus outbreak and currently is remaining closed throughout 2020.