Topographic map of Purmerend (municipality), as of 2022 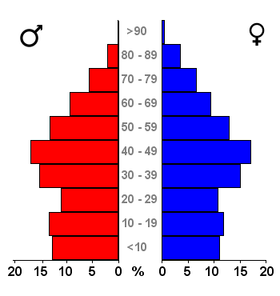 listen)) is a city and municipality in the west of the Netherlands, in the province of North Holland and in the region of West Friesland. The city is surrounded by polders, such as the Purmer, Beemster and the Wormer. The city became the trade center of the region but the population grew relatively slowly. Only after 1960 did the population start to grow from around 10,000 to around 80,000 by the 2010s. From the 1960s onwards, Purmerend has seen major expansion and continues to do so. This expansion has turned Purmerend into a commuter town; many inhabitants of Purmerend (14,200 in 2011)[5] work, go to school or spend their leisure time in Amsterdam. Purmerend is part of the Randstad, one of the largest conurbations in Europe.[6]

Purmerend was created out of the small fishing village Purmer, which was situated on the land between the Purmermeer (Purmer Lake), the Beemstermeer (Beemster Lake) and the Wormermeer (Wormer Lake) on the south bank of the river De Weere, which used to connect the former Purmermeer and Beemstermeer.

Purmerend was founded by a rich banker from Amsterdam, Willem Eggert. HRH Count William VI of Holland (Willem VI van Holland) gave him permission to build his own fortified castle, Slot Purmerstein, in 1410. The castle's construction was completed in 1413[7] and it remained standing until it was demolished in 1741 after it had fallen into decline.[8] In 1434 Purmerend was given city rights and on 21 April 1484 (some sources claim 14 April 1484) the city was given “marktrechten” (the right to organise two “jaarmarkten” annual markets and a “weekmarkt” weekly market) by Count Jan van Egmond.[7][9][10] This meant merchants from outside of Purmerend could now offer their merchandise for sale on the market. Before 1484 only food products for its own population were allowed to be sold.[11]

By 1500 Purmerend had grown considerably, as can be seen on maps dating from that period. They show that the town had a rectangular shape and was crossed by two roads: one leading north–south, the other east–west. The draining of the Beemster Lake in 1612 and the Purmer Lake in 1622 resulted in a great loss in fishing grounds to Purmerend. However, the new and fertile soil favoured agriculture and livestock breeding, making Purmerend prosperous again. Purmerend now became the centre of an agricultural region, the produce of which was sold on the markets of Purmerend.

From 1819 till 1824 the Noordhollandsch Kanaal was constructed. It was dug along existing waterways like the Oude Vaart, which connected Purmerend to the IJ opposite Amsterdam, and along canals that connected Purmerend to Alkmaar. On 20 July 1821 the large Schutsluis Purmerend (Purmerend Lock) was completed just west of the city center.[12]

The Noordhollandsch Kanaal would unexpectedly bring great prosperity to Purmerend. In 1840 the company Brantjes en Comp., trading in wood was founded. The Firma Dirk Bakker also started to import wood. Meanwhile, Firma Pont from Edam diverted her imports over Purmerend via the Where river. Ships from Norway, Sweden, Russia and America then started to make direct trips to Purmerend to bring wood. Sometimes 12 of these were present at the same time.[13]

The increased commerce and shipping led to the creation of an industry that catered for ships. In turn Purmerend merchants started to equip whalers. In 1866 the establishment of a tow service with 7 tugboats by Gebroeders Goedkoop was one of the last highlights of this period. By about 1880 this boom period for Purmerend was ending, because the new North Sea Canal diverted traffic elsewhere.[14]

During World War II Purmerend was occupied by German forces on 14 May 1940. After five years of occupation, the city was liberated by Canadian and other allied forces on Wednesday 9 May 1945.[15]

After 400 years Purmerenders saw the last cattle auction at the original location in downtown Purmerend in 2008. The auction was moved to the "Baanstee Oost" industrial area, in the north side of Purmerend. This was decided for various reasons: freeing up downtown traffic congestion, allowing for more parking area downtown, more room for auction grounds and ease of moving trucks around at the new site.

Satellite photo of the city of Purmerend. (centered)

Purmerend lies on a swampy and watery area known as Waterland. When the first settlers began cultivating the land, consisting mostly of turf (veen), they dug ditches that run parallel to each other to drain excess water. As a side effect of this process the land began to sink. This resulted in a never-ending battle against the water, and made agriculture near impossible at the time. It also meant that any structure needed to be built on an artificial Terp or natural hill. The former being true for Purmerend which was built on the bank of the river De Where, that linked the former Beemster and Purmer lakes. 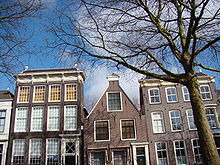 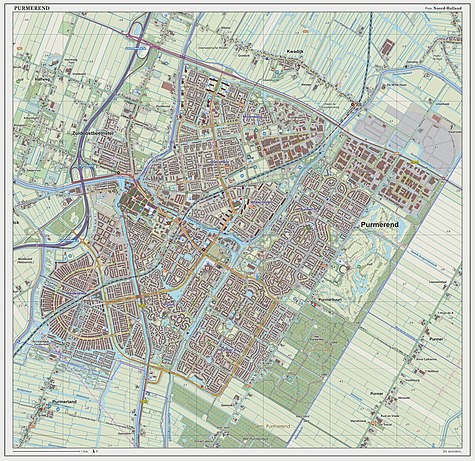 Dutch Topographic map of Purmerend (town), as of March 2014.

Purmerend is made up of the following districts. 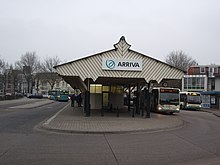 Public transportation is mainly focused on Amsterdam, with several bus services and a train service via Zaandam.

There are 3 train stations in Purmerend, in the north, centre and south. These are:

The bus station in Purmerend is called "Tramplein" (or, Tram Square), but not because any trams run in Purmerend today. Historically, a tram ("'t Boemeltje") ran from Amsterdam Centraal to Purmerend, ending at the Tramplein location. Although the tram service discontinued years ago, the end stop retained the name Tramplein.[citation needed]

In 1951 The Ramblers had a hit commemorating the tram service "’t Boemeltje van Purmerend".

In 2019, the province of North Holland revealed plans to extend the Amsterdam Metro's Noord-Zuidlijn from Noord station to Purmerend.[17]

The municipal council of Purmerend consists of 37 seats, which are divided as follows since the elections of November 2021:

The mayor of Purmerend is Don Bijl.

See also: List of twin towns and sister cities in the Netherlands

Purmerend is twinned with: