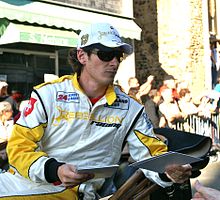 Rebellion Racing is a Swiss racing team that competes in endurance racing. The team competed in the 2011 Intercontinental Le Mans Cup season and won the LMP1 teams' title in the 2011 Le Mans Series season. The team started as an association between Speedy Racing and Sebah Racing, which began in 2008. Rebellion Racing's team principal is Alexandre Pesci and the team manager is Bart Hayden.[1]

On 4 December 2019, it was announced that from the 2022-23 Season onwards, the team would be set to become the factory team of Peugeot Sport, and will run Le Mans Hypercars in the FIA World Endurance Championship as Rebellion Peugeot.[3] However, on 13 February 2020, it was announced by the team's parent company, Rebellion Corporation, that following a strategic committee meeting, it was decided that the firm would cease its motorsport business operations after the 2020 24 Hours of Le Mans.[4][5]

At the 2011 24 Hours of Le Mans, the no. 12 car of Nicolas Prost/Neel Jani/Jeroen Bleekemolen qualified 8th and finished 6th overall. It was the first gasoline finisher. The no. 13 car of Andrea Belicchi/Jean-Christophe Boullion and Guy Smith retired after 190 laps.

In the season finale in Zhuhai, the top gasoline-powered LMP1 car was the Rebellion team's Toyota-engined Lola coupe driven by Neel Jani and Nicolas Prost. It came back from an unscheduled stop to change front and rear bodywork, after Jani ran into the back of Allan McNish's Audi R18, to overhaul the OAK Racing OAK-Pescarolo driven by Alexandre Premat, Olivier Pla and Jacques Nicolet for fourth position and[7] scored the points needed to secure third place in the Team classification in LM P1 of the Intercontinental Le Mans Cup, behind the turbo diesels of the Peugeot and Audi factory teams.[8]

On 1 February 2012, it was announced that German driver Nick Heidfeld would drive a Rebellion Lola-Toyota in select rounds of the FIA World Endurance Championship. Heidfeld will share the wheel of the Anglo-Swiss squad's No. 12 LMP1 entry with Neel Jani and Nicolas Prost at the Twelve Hours of Sebring, Six Hours of Spa and 24 Hours of Le Mans. He completes Rebellion's lineup, with Jeroen Bleekemolen having been announced on 31 January as the third driver in the No. 13 Lola-Toyota with Andrea Belicchi and Harold Primat.[9]

Rebellion Racing entered the 2012 Petit Le Mans to attempt to score an overall victory at the race since Audi chose to not enter the race. After early battling with Muscle Milk Pickett Racing, the latter crashed when attempting to pass a GT car, allowing Rebellion to lead the rest of the race and win Petit Le Mans.

Rebellion Racing participated in both the 2013 FIA World Endurance Championship season and 2013 American Le Mans Series season. But in July, midway through the season, the team decided to end its ALMS programme and focus on the WEC. After that, it only contested the Petit Le Mans series finale at Road Atlanta in October.[10] Rebellion Racing took their second consecutive overall victory at Petit Le Mans, after Muscle Milk Pickett Racing again retired halfway through the race.[11]

On 8 June 2013, Rebellion confirmed they have entered a partnership with Oreca to design and build their own LMP1 car, the Rebellion R-One. The car debuted at the 2014 Spa 6 Hours in the 2014 FIA World Endurance Championship and continues to use Toyota engines.[12]

On 25 March 2015, it was announced that Alexandre Imperatori and Daniel Abt had signed up with the team to pilot the squad's second car alongside Dominik Kraihamer.[14]

The Rebellion R-One LMP1 cars continued to be powered by AER P60 V6 GDI twin-turbo engines from Advanced Engine Research while also using Dunlop Tyres after previously using Michelin tyres. Their driver line-up would be Nick Heidfeld, Nicolas Prost and Nelson Piquet Jr. with Mathias Beche in round 4 in the #12 entry car. The #13 entry car's drivers would be Dominik Kraihamer, Alexandre Imperatori and Mathéo Tuscher.

After a four-year hiatus, Rebellion Racing participated in the WeatherTech SportsCar Championship which started at the 24 Hours of Daytona in January. The team also decided to switch to the LMP2-class in the 2017 FIA World Endurance Championship.[15] The team was renamed Vaillante Rebellion, following a partnership with Editions Graton, the publishers of the French comic Vaillante.[16]

In 2018 the WEC switched to a winter calendar. Rebellion Racing returned to the LMP1 class with the new Rebellion R13 prototype, and two full season entries. They competed in both the 2018 and 2019 24 Hours of Le Mans, achieving a 3rd place in the 2018 edition. This season the team also achieved their first overall win in the WEC at the 6 Hours of Silverstone, after the two Toyota cars got disqualified after the race. The team finished 2nd in the teams' championship.

Rebellion Racing announced a single full-season entry for the 2019–2020 season, with another entry set to be entered on a race-by-race basis depending on sponsorships. The second entry was raced at Silverstone, Spa and Le Mans. The team took their first "on track" victory at the 4 hours of Shangai, with the #1 car qualifying in 1st place and winning the race, becoming the first privateer team to do so in the WEC's history. The same happened at that year's Lone Star Le Mans, where the team took their last win. Rebellion Racing's last race was that year's 24 Hours of Le Mans, the second to last race on the calendar, after which the team retired from motorsports following a decision taken by its parent company, Rebellion Corporation.