It ran a mixture of classes of sports prototypes and Grand Touring-style cars. In 2003, the series debuted their custom prototype chassis, known as Daytona Prototypes, named after their premiere event, the Rolex 24 at Daytona.

The series staged the North American Endurance Championship, featuring three of its premier races at Daytona, Watkins Glen, and Indianapolis.[1]

Following the failure of the United States Road Racing Championship in 1999, the new Grand American Road Racing Association announced their intentions to adopt a format similar to the one used in the USRRC, centering on the 24 Hours of Daytona. This series was seen as an alternative to the former IMSA GT Championship, which had since been replaced by the American Le Mans Series in 1999. The new series would run two classes of Sports Racing Prototypes identical to the rules used in the new FIA Sportscar Championship in Europe, while Grand Touring-style cars would consist of three classes: GTO for larger production-based race cars, GTU for smaller production-based race cars, and AGT for American tube frame cars. The league would also acquire the Six Hours of Watkins Glen, giving the league a second endurance race alongside the Rolex 24 at Daytona to compete with the ALMS' 12 Hours of Sebring and Petit Le Mans. GTO and GTU would be renamed GTS and GT for 2001 to better match the classes used by the similar American Le Mans Series. 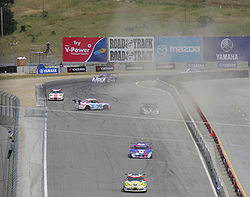 2003 would see the series go through a radical change, as Daytona Prototypes debuted for the first time to replace both of the Sports Racing Prototype classes. Although SRPs would be allowed to continue until the end of 2003, few were seen while the Daytona Prototypes took over the series. The American GT class was also dissolved with the cars being placed into the similar GTS class.

In 2004, the faster GTS class was abandoned in order to provide a larger gap between the Daytona Prototypes and GT cars. The GTS cars were as fast (if not faster) than the Daytona Prototypes. This meant that the GT class was now the top tier, being joined by the Super Grand Sport (SGS) class moved up from the Grand Am Cup series. This was further streamlined in 2005 with all Grand Touring-style cars being in a single GT class.

This formula led to the Rolex Sports Car Series having a large number of competitors at most events, mostly due to the ease of use and low cost of the cars in either class while the Grand American Road Racing Association was able to keep the competition equalized.

With such high car counts, Grand-Am has had to split GT and DP races at shorter tracks where it is not feasible to put 50 cars on the track at one instance. In each case, the GT cars race on Saturday, and the DP cars race on Sunday. This split format allows drivers to run both races. Each race is the same distance, as it would be if the two classes were running together. This did however make GT races slightly longer than combined events, since GT cars would likely finish several laps behind the winning prototype and thus not cover the full distance.

When the GT and DP races were combined, the two classes would use a motorcycle racing-style "wave start," a concept from Roger Edmonson, who had been in motorcycle racing before organising the Grand American series with the France family. In this case, the DP cars would take the green flag first, followed, usually 20–30 seconds later (depending on track length) by the GT cars. By starting the cars separately, the organisers hoped for safer starts by having the two classes of cars race separately.

Due to the series' affiliation with NASCAR, many Sprint Cup Series drivers occasionally participated in Rolex Series races, particularly the 24 Hours of Daytona.

Pruett/Rojas at Road America, champions in 2012