The Sepang International Circuit (Malay: Litar Antarabangsa Sepang) is a motorsport race track in Sepang, Selangor, Malaysia. It is located approximately 45 km (28 mi) south of Kuala Lumpur, and close to Kuala Lumpur International Airport. It hosted the Formula One Malaysian Grand Prix between 1999 and 2017, and is also the venue for the Malaysian Motorcycle Grand Prix, the Malaysia Merdeka Endurance Race and other major motorsport events.

The circuit was designed by German designer Hermann Tilke, who would subsequently design circuits including in Shanghai, Sakhir, Istanbul, Marina Bay and Yas Marina. As part of a series of major infrastructure projects in the 1990s under Mahathir Mohamad's government, the Sepang International Circuit was constructed between 1997 and 1999 close to Putrajaya, the then-newly founded administrative capital of the country, with the intent of hosting the Malaysian Grand Prix. Similar to other of the country's circuits, the circuit is known for its unpredictable humid tropical weather, varying from clear furnace hot days to tropical rain storms.

Petronas sponsored the Formula One Malaysian Grand Prix as the title sponsor since its inaugural race in 1999.

On 23 October 2011, on the second lap of the MotoGP Shell Advance Malaysian Grand Prix, the Italian motorcycle racer Marco Simoncelli died following a crash in turn 11 on Lap 2, resulting in an abandonment of the race.

The track was completely resurfaced in 2016 with the support of italian designers Dromo, with several corners reprofiled to emphasize mechanical, rather than aerodynamic grip. Notably, the final corner was raised by approximately 1 meter,[1] which officials claimed would force drivers to take a later apex and explore different racing lines through the hairpin.

In October 2016 it was rumored that the Sepang circuit may be dropped from the Formula One calendar due to dwindling ticket sales, and held its nineteenth and last World Championship Grand Prix in 2017.[2] The race's contract was due to expire in 2018, but its future had been under threat due to rising hosting fees and declining ticket sales. 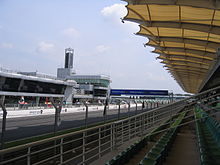 The main circuit, normally raced in a clockwise direction, is 5.543 km (3.444 mi) long, and is noted for its sweeping corners and wide straights.[citation needed] The layout is quite unusual, with a 927 m (1,014 yd) long back straight separated from the pit straight by just one very tight hairpin.

Other configurations of the Sepang circuit can also be used. The north circuit is also raced in a clockwise direction. It is basically the first half of the main circuit. The course turns back towards the pit straight after turn 6 and is 2.706 km (1.681 mi) long in total.

Sepang starts with a long pit straight where the DRS zone exists – crucial for drivers to get a good exit out of the last corner to gain as much speed as possible. Turn 1 is a very long, slow corner taken in second gear. Most drivers brake incredibly late and lose speed gradually as they file round the corner, similar to Shanghai's first turn but slower. Turn 1 leads straight into Turn 2, a tight left hairpin which goes downhill quite significantly. The first two corners are quite bumpy, making it hard to put power onto the track.[3] Turn 3 is a long flat out right hander which leads into Turn 4 – known locally as the Langkawi Curve[4] – a second gear, right-angle right-hander. Turns 5 and 6 make up an incredibly high-speed, long chicane that hurts tyres and puts a lot of stress on drivers due to high G-Force. It is locally known as the Genting Curve.[4] Turns 7 and 8 (the KLIA curve) make up a long, medium-speed, double-apex right hander, and a bump can cause the car to lose balance here.[3] Turn 9 is a very slow left-hand hairpin (the Berjaya Tioman Corner[4]), similar to turn two but uphill. Turn 10 leads into a challenging, medium-speed right hander at turn 11, requiring braking and turning simultaneously. Turn 12 is a flat-out, bumpy left which immediately leads into the flat right at turn 13, then the challenging 'Sunway Lagoon'[4] curve at turn 14. Similar to turn 11, it requires hard-braking and steering at the same time. It is taken in second gear. The long back straight can be a good place for drivers to overtake as they brake hard into turn 15, a left-handed, second-geared hairpin but drivers are advised by experts to be careful not to get re-overtaken as they come into turn 1.