Skip to content
For the district, see Sierre (district).
Municipality in Switzerland in Valais

listen)) is the capital municipality of the district of Sierre, located in the canton of Valais, Switzerland. It has a population of 16,332. Sierre is nicknamed City of the Sun (French: Cité du Soleil) for its average of 300 days of sunshine a year.

It is the last official French-speaking city in Valais before the French–German language border of the canton located at the forêt de Finges, a few kilometres after the town. A German-speaking minority lives in Sierre, counting for around 8% of the population.[3]

Sierre was first mentioned around 800 as Sidrium, though a 12th-century document refers to the village being founded in 515. In 1179 it was mentioned as Sirro and in 1393 as Syder.[4]

The area around the modern town, especially Gerunden hill, was settled very early. Archeological sites on the Gerunden hill have produced neolithic objects and grave goods (including a polished stone ax), Bronze Age weapons and jewelry, Early Iron Age objects, and Roman era inscriptions, jars, jewelry, and coins. A soapstone pot from the Early Middle Ages and a gold signet ring with the name Graifarius from the 6th century have also been found. Other sites on nearby hills and near the chapel of Saint-Ginier, the Château de Villa, the churches of Sainte-Croix, Grands-Prés, Muraz, Glarey and Bernunes have yielded up graves originating from the Bronze Age to the Carolingian era. In Grands-Prés there is a fire pit from the beginning of the Late Iron Age (5th–6th century BC).[4]

During the Roman era it appears that there was no major population center, but rather several scattered groupings of separate, upper-class dwellings. Under the chapel of Saint-Ginier, the remains of a Roman-era house or estate have been discovered. Other Roman ruins have been found near the Château de Villa, in the church of Sainte-Croix (small terraced bath), in Grands-Prés by Muraz another house and in Gerunden the remains of buttress reinforced masonry indicate that a public or government building once stood there. Five altars were found in Saint-Ginier, along with another two in the scattered settlements, one of which was dedicated to Mercury. During the early imperial period, the duumvir or mayor of the Civitas Vallensium, Caius Cominus Chiu, lived in Sierre. In the late imperial period, the family of the senator of Vinelia Modestina also lived in the area.[4]

The chapel of Saint-Félix was built in the 5th or the beginning of the 6th century on Gerunden hill.[4]

In 515 the estate at Sierre was given by the King of Burgundy Sigismund to the Abbey of Saint-Maurice to hold as a fief. By the 11th century, the fief of Sierre was owned by the Bishop of Sion. The aristocratic families and the residents of the fief lived on the Gerunden, Vieux-Sierre, and Plantzette hills. On each of these hills there was a castle that served as the residence for the Bishop's representatives and as a refuge for the population. The castles were razed in the mid-14th century when the noble families stood with the Bishop in his war with the Zenden of the Upper Valais and Counts of Savoy. The demolished castles and villages were abandoned and most residents settled farther north, in plan-Sierre. The only castle that survived the wars of the 14th century was Goubing Castle, southeast of Sierre, which belonged to the lords of Granges.[4]

The Contrée of Sierre was originally a group that managed the commons. As vassals of the Bishop, they had the right to assemble twice a year to regulate the management of the common lands and the affairs of the local police. In the 14th and 15th centuries, this cooperative adopted a larger political role as they started to administer more of the daily affairs in the villages and acquired the right to appoint their own judges. Eventually, this grew into the Noble Contrée which then formed the core of Sierre Zenden from which the city of Sierre later developed. The town of Plan-Sierre soon took over the leadership role in the Noble Contrée. Until 1798, the Noble Contrée was appointed by a council of village representatives, under the leadership of the Bishop's representative. In 1559, Plan-Sierre divided into four quarters: Villa, Monderèche, La Salla, and Glarey. In 1620, the town hall was built.[4]

As the capital of a Zenden, Sierre fought the French in the 1798–99 invasion. In 1799, the city was occupied by French and Vaudois troops. The French set up their headquarters in Sierre.[4]

In the conflicts between the conservative Upper Valais and the liberal Lower Valais, Sierre served as the seat of government in 1839–40. After 1848, the villages of the Noble Contrée became municipalities under the Valais cantonal constitution. The Zenden of Sierre became the District of Sierre with Sierre as the capital. The new city executive council had nine members, while of the General Council (legislature) had 60. Initially, the majority of the power was held by the Conservatives (now the Christian Democrats). In 1913, they were joined by the Liberals, in 1945 the Social Democrats, and in 2004 the Greens.

At the beginning of the 20th century, Sierre became economically important as aluminium smelting has been historically enabled by its access to hydroelectricity. Today the aluminium companies Novelis and Alcan employ 1,200 workers in Chippis and Sierre.

In 2007, the agglomeration of Sierre/Crans-Montana was formed to address created to common problems, especially in the fields of tourism and transportation.[4]

Of the built-up area, industrial buildings made up 5.4% of the total area while housing and buildings made up 10.3% and transportation infrastructure made up 10.3%. Power and water infrastructure as well as other special developed areas made up 4.0% of the area while parks, green belts and sports fields made up 4.4%. Out of the forested land, 18.7% of the total land area is heavily forested and 2.7% is covered with orchards or small clusters of trees. Of the agricultural land, 6.9% is used for growing crops and 2.5% is pastures, while 25.1% is used for orchards or vine crops. Of the water in the municipality, 1.3% is in lakes and 5.5% is in rivers and streams.[5]

The municipality is the capital of the Sierre district. It is located in the middle Rhône valley, on the right bank of the river. The nearby Raspille mountain stream is considered the dividing line between the French and German-speaking portions of Switzerland. It consists of the city of Sierre, the villages of Granges, Noës and Muraz, and the hamlets and settlements of Gerunden, Plantzette, Vieux-Sierre, Bourg, Glarey, Borzuat, Zervettaz, Villa d'en Bas, d'en Haut, Sous Géronde, Cuchon, and Monderèche.

Sierre is a starting point for the tourist sites of the Val d'Anniviers, comprising the villages of Vercorin, Chandolin, St-Luc Vissoie, St-Jean Chandolin, Grimentz, Zinal, and Ayer. Sierre is connected with Crans-Montana by a funicular railway.

Lac de Géronde is a small lake on its outskirts.

The hilly topography of the valley floor derives from a very large postglacial rock avalanche, which collapsed from a fractured scar high to the north.[6]

The blazon of the municipal coat of arms is Gules, a Sun in Splendour Or.[7] The coat of arms is depicted (uncolorised) in the Schalbetter map (printed in 1545 by Sebastian Münster, Basel).

The historical population is given in the following chart:[4][14]

The Centrale Électrique et Bâtiments Alusuisse (Power station and buildings of the Alusuisse company) is listed as a Swiss heritage site of national significance. The entire Sierre town and surrounding are part of the Inventory of Swiss Heritage Sites.[15]

Sierre is host to a local wine museum (Musée Valaisan de la Vigne et du Vin) and of a museum dedicated to the memory of Rainer Maria Rilke who lived there until his death and is buried in the nearby town of Raron.

Sierre is twinned with the towns of

Sierre has a long history of winemaking and is home to the Rèze grape used to produce the sherry-style Swiss wine Vin des glaciers.[22] 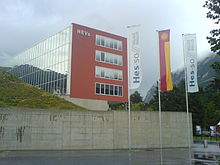 During the 2010–2011 school year there were a total of 149 students in the Sierre school system. The education system in the Canton of Valais allows young children to attend one year of non-obligatory Kindergarten.[24] During that school year, there 2 kindergarten classes (KG1 or KG2) and 31 kindergarten students. The canton's school system requires students to attend six years of primary school. In Sierre there were a total of 8 classes and 149 students in the primary school. The secondary school program consists of three lower, obligatory years of schooling (orientation classes), followed by three to five years of optional, advanced schools. All the lower and upper secondary students from Sierre attend their school in a neighboring municipality.[25]

As of 2000, there were 1,077 students in Sierre who came from another municipality, while 517 residents attended schools outside the municipality.[21]

HC Sierre plays in the Swiss League, the second tier of Swiss ice hockey, as Genève-Servette HC's affiliate. They play their home games in the 4,500-seat Graben Arena.