A single-cylinder engine, with 4-strokes sometimes called a thumper, is a piston engine with one cylinder. This engine is often used for motorcycles, motor scooters, go-karts, all-terrain vehicles, radio-controlled (on 0) [2974] vehicles, portable tools and garden machinery (such as lawnmowers, cultivators, and string trimmers). 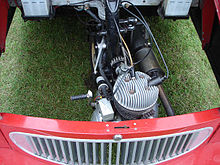 Villiers engine in a 1959 Bond Minicar

A variation known as the split-single makes use of two pistons which share a single combustion chamber. 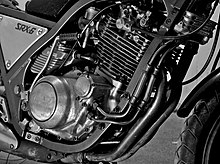 Early motorcycles, automobiles and other applications such as marine engines all tended to be single-cylinder. The configuration is almost exclusively used in portable tools, along with garden machinery such as lawn mowers.[9] Single cylinder engines also remain in widespread use in motorcycles, motor scooters, go-karts, auto rickshaws, and radio-controlled models. From 1921-1960, the Lanz Bulldog tractor used a large horizontally-mounted single cylinder two-stroke engine.[10] However they are rarely used in modern automobiles and tractors, due to developments in engine technology.

Single cylinder engines remain the most common engine layout in motor scooters and low-powered motorcycles. The Honda Super Cub (the motor vehicle with the highest overall sales since its introduction in 1958) uses a 49 cc (3.0 cu in) four-stroke single-cylinder engine. There are also several single-cylinder sportbikes (such as the KTM 690 Duke R), dual-sport motorcycles (such as the BMW G650GS) and the classic-styled Royal Enfield 500 Bullet.[11][12]

The Moto3 class in the MotoGP World Championship have used four-stroke 250cc (15.2 cu in) single cylinder engines since the class replaced 125cc two-strokes in 2012.