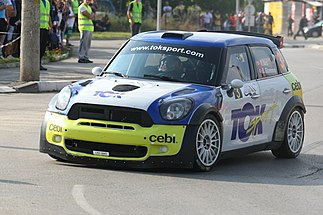 The goal of the Super 2000 classification is to allow more manufacturers and privateers to race by reducing the cost of a competitive car.

In order to cut costs and shorten development time, the Super 2000 rally cars originally used a common control gearbox and drivetrain made by a French company, Sadev. The FIA has since announced that Xtrac[1] and Ricardo Consulting Engineers will be allowed to also manufacture S2000 gearboxes to FIA specification. This is to further cut costs by introducing competition into gearbox supply.

These new rules allowed Ford to build from scratch their S2000 Fiesta vehicles in Australia, in as little as 14 weeks, starting out with a Super 1600 chassis and rollcage.

In 2011 the specifications were revised, allowing 1600 cc turbocharged engines, and the use of 2000 cc normally-aspirated engines rapidly stopped as a result.[4] These 1600 cc turbo engines fully replaced the 2 litre engines.

For the 2014 WTCC season, the TC1 regulations were introduced for touring cars. For the engine this included a larger air intake restrictor allowing power outputs of 380 bhp and more.[5]

For the 2017 WRC season, the engine intake restrictor diameter for rally cars was increased to 36 mm, allowing power output to rise to 380 bhp.[6]

New regulations for the FIA World Rally Car were introduced in 2011. WRC cars would use the Super 2000 specification, and be powered by a 1600 cc turbo engine instead of the 2000 cc used previously. The WRC car would thus be based on the current 2011 model Super 2000 cars fitted with a supplementary kit for rallying.[7] The kit must be able to be fitted or removed within a defined time limit.[7][8]

South Africa was the first country in the world to run Super 2000 cars in rallying. Toyota South Africa and Volkswagen South Africa each built 2 cars to compete in the South African Rally Championship in 2005.[citation needed]