Skip to content
Single-Seater Racing Championship
This article is about a Japanese open wheel racing series. For the mathematical concept regarding a generalization of the superellipse, see superformula. For Formula One video game known as "Super Formula" in Japan, see Tail to Nose.

The Japanese Super Formula Championship is a formula racing series. It is considered as being the top level of single-seater racing in Japan and regional motorsports in Asia. The series is sanctioned by the Japan Automobile Federation (JAF) and managed by Japan Race Promotion (JRP).

In 1973, the Japan Automobile Federation established the All-Japan Formula 2000 Championship as the first top-level formula racing series in Japan, to promote the sport of formula car racing in the country.

In 1976, the FIA modified the Formula Two regulations to allow the use of purpose-built racing engines. With this change, the reasoning behind the name "Formula 2000" had disappeared, which led to the series being renamed the All-Japan Formula Two Championship from 1978.

These early years of formula racing in Japan were led by drivers such as Kunimitsu Takahashi, Kazuyoshi Hoshino, Masahiro Hasemi, Keiji Matsumoto, and Satoru Nakajima, who would go on to become the first Japanese driver to compete full-time in the Formula One World Championship. During the transition from Formula 2000 to Formula 2, a number of foreign drivers from the European F2 circuit began competing in and winning races in the Japanese series. 1981 European F2 champion Geoff Lees became the series' first non-Japanese champion when he won the All-Japan F2 title in 1983.

When European Formula Two ended in 1984, its Japanese counterpart did not follow suit immediately. The JAF considered starting a new Formula Two series from 1988. However, all entrants ran Formula 3000 cars in 1987. So, the 1987 Formula Two Championship was cancelled due to no entry of any cars for that format.

During the late 1980s, a number of factors contributed to a surge in popularity for Japanese Top Formula racing. Honda-powered Formula One teams began winning multiple championships. The Japanese Grand Prix was reintroduced to the Formula One calendar in 1987, and that same year, Satoru Nakajima began competing full-time in F1. Fans began following the series through Fuji Television's broadcasts of Formula One, resulting in an increased interest in all forms formula racing. Combined with the asset-driven bubble economy of the 1980s, the All-Japan Formula 3000 Championship attracted several entrants and investors.

Veteran drivers such as Hoshino, Hasemi, Takahashi, and Matsumoto were succeeded by a new generation of Japanese talents, led by 1988 champion Aguri Suzuki, and 1991 champion Ukyo Katayama - who would each go on to enjoy significant tenures in Formula One. The prosperous conditions within All-Japan F3000 also attracted many promising young drivers outside of Japan to compete in the series. Among those drivers included future Formula One Grand Prix winners Jean Alesi, Johnny Herbert, Eddie Irvine, and Heinz-Harald Frentzen. The most notable of these young drivers from outside Japan, however, was future seven-time Formula One World Champion Michael Schumacher, who made a one-off appearance at Sportsland Sugo in 1991.

The eventual burst of the bubble economy led to a decline in the series' popularity during the early to mid 1990s. Japanese and European regulations paralleled one another until 1996, when the International Formula 3000 series became a one-make format to lower costs.

In 1995, Japan Race Promotion (JRP) was established by Fuji Television, and became the new promoter and organising body of Japanese top formula racing, recognised by the JAF. As F3000 went down the path of a spec formula series abroad, the JRP opted to continue with the previous F3000 regulations which allowed for open chassis and engine competition. For 1996, the first full season under the management of JRP, the series changed its name to Formula Nippon.

Many of the top drivers in Formula Nippon continued to race in sports cars and touring cars as their predecessors had done in years past. Pedro de la Rosa became the first "double champion" of Japan in 1997 when he won both the Formula Nippon and All-Japan GT Championship GT500 titles in the same calendar year. Satoshi Motoyama and Richard Lyons would later accomplish the same feat in 2003 and 2004, respectively.

On 5 August, 2012, the JRP announced that the series would change its name from Formula Nippon to Super Formula in 2013, stating a "desire to establish the series on an equal footing with the FIA Formula One World Championship and the IZOD IndyCar Series as the undisputed, standard-bearer top formula racing in Asia."[1]

The series experienced a surge of international interest when 2015 GP2 Series champion, Stoffel Vandoorne, entered full-time in 2016 with DoCoMo Team Dandelion Racing. Vandoorne would finish his season with two race victories before making the step up to F1 with McLaren in 2017. A year later, 2016 GP2 Series champion Pierre Gasly entered the series, bringing Red Bull sponsorship with him to Team Mugen. Gasly finished 2017 as the Rookie of the Year, with two wins, and finished runner-up in the standings by half a point.

Felix Rosenqvist, Álex Palou, and Patricio O'Ward later became IndyCar Series race winners after racing in Super Formula. Palou, who was the 2019 Rookie of the Year, went on to win the IndyCar Series championship in 2021.

In 2020, Super Formula adopted a new top ten scoring system similar to the one used in Super GT. Bonus points were given to the top three qualifiers in every round; three points for pole position, two for second place, and one for third place.[2]

Start of the race at the 2014 Motegi round 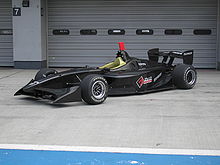 The previous Formula Nippon chassis, the Swift FN09 (also known as the Swift 017.n), was introduced in the 2009 season and raced until the end of the 2013 season.

Until 2002, Formula Nippon was an open formula category, where a variety of chassis builders, engine manufacturers, and tyre manufacturers could compete. Chassis were supplied by Lola, Reynard, and G-Force. Mugen-Honda supplied the vast majority of the engines along with Cosworth and Judd. Bridgestone, Yokohama, and Dunlop supplied teams with tyres. However, the series began adopting more spec components. Bridgestone became the series' sole tyre supplier beginning in 1997, and in 1998, Mugen-Honda became the sole engine supplier (though open tuning was still allowed). Chassis remained an open formula until 2003, after Reynard declared bankruptcy and G-Force withdrew from the series. The Lola B03/51 became the series' spec chassis thereafter.

In 2006 Formula Nippon underwent a drastic revision of its technical regulations. The new Lola FN06 chassis was introduced, while new three-litre V8 engines by Toyota and Honda were introduced, based on the same engine blocks that the manufacturers used in the 2005 IndyCar Series. American racecar manufacturer Swift Engineering produced the FN09 chassis that was introduced in 2009, and used until 2013. Also, in 2009, a new 3.4 litre V8 engine formula was introduced, a common engine that would be used in Formula Nippon and the GT500 class of Super GT, as well as a "push-to-pass" overtake system that is still used today.

The current spec chassis for the series is the Dallara SF19, which was unveiled at Suzuka Circuit in October 2017. The SF19 weighs 670 kilogrammes (including the driver), and is powered by two-litre single turbo-charged engines built by Honda and Toyota under the Nippon Race Engine (NRE) formula. The engines used in Super Formula have been detuned compared to their counterparts used in Super GT (GT500), but continue to allow for the use of the "push-to-pass" style Overtaking System (OTS) that allows for an additional five kilogrammes per hour (5 kg/h) of fuel burn for up to 200 seconds during a race.

Despite the more technically demanding regulations, the Japanese top-level formula series remains a national series, with second tier status compared to the FIA Formula 2 and its predecessor GP2. Foreign drivers have always been regular participants in the Japanese championships, and there have been several drivers to come from a Japanese Formula 3000 or Formula Nippon drive to a prominent Formula One role; the best-known of these are Eddie Irvine, Ralf Schumacher, the 1996 Formula Nippon champion, and Pedro de la Rosa, the 1997 Formula Nippon champion.

Starting in 2022, Honda Performance Development, the United States division of Honda's motorsport operations, have offered a $600,000 USD annual scholarship to the winner of the Formula Regional Americas Championship towards a Honda-powered seat in Super Formula.[5] 2021 champion Kyffin Simpson, the first recipient, declined the scholarship offer, citing the logistical challenges brought on by the COVID-19 pandemic.[6] Raoul Hyman accepted the offer after becoming series champion in 2022.[7]

Super Formula races are traditionally held at the six major national racing circuits in Japan. Since the establishment of the JRP in 1996, Suzuka Circuit, the traditional home of the Formula One Japanese Grand Prix, has staged more rounds than any other venue. Suzuka typically hosts two rounds per season: The Suzuka 2&4 Race, a joint event staged with the All-Japan Road Race Championship, is typically held in the spring. The JAF Grand Prix Suzuka, Japan's oldest national formula racing event, is typically held at the end of the season in the autumn.

Miné Circuit (formerly Nishinihon Circuit), was a regular fixture of the calendar until it closed for spectator events after the 2005 season. Autopolis, in Kyushu, and Okayama International Circuit, in the Chugoku region, have since taken Miné's place as the westernmost venues that Super Formula visits.

Sepang International Circuit in Malaysia hosted the first and only championship round outside of Japan when it was part of the 2004 calendar. The series planned to race at Inje Speedium in South Korea during the 2013 season, but the race was cancelled.