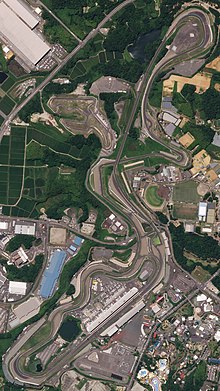 Soichiro Honda decided to develop a new permanent circuit in Mie prefecture in the late 1950s. Designed as a Honda test track in 1962 by Dutchman John "Hans" Hugenholtz, the most iconic feature of the track is its "figure eight" layout, with the 1.2 km (0.75 mi) long back straight passing over the front section by means of an overpass. It is one of only two FIA Grade 1 licensed tracks to have a "figure eight" layout, the other one being the Fiorano Circuit.

The circuit has been modified at least eight times:

In 1983 a chicane was inserted at the last curve to slow the cars into the pit straight; the original circuit was an incredibly fast track with only one slow corner; without the Casio chicane some cars would go through the final long right-hand corner flat out and then would go past the pits at more than 200 mph (320 km/h). In 1984 the first part of Spoon was made slightly slower and the corner was brought closer to the track to expand run-off area there, and in 1985 the first corner was made slightly slower.

In 1987 the circuit was brought up to F1 and Grand Prix motorcycle standards for both Japanese Grand Prixs of their respective championships, the F1 Grand Prix being the first held at Suzuka. The Degner curve was made into two corners instead of one long curve, and more crash barriers, more run-off areas were added, exposed vegetation was barricaded off and straw bales were removed (but still used for the Japanese motorcycle Grand Prix).

Following the death of Daijiro Kato at the 2003 Japanese motorcycle Grand Prix, Suzuka reconfigured the motorcycle variant of what is now known as the Hitachi Automotive Systems Chicane before the final turn, and added a second chicane, between the hairpin and 200R.[9]

At the 2014 Japanese Grand Prix, F1 driver Jules Bianchi suffered serious injuries after colliding with a recovery vehicle, and died in hospital as a result nine months later. In the wake of the accident, the Dunlop corner was slightly changed and revised in safety standards, and the organisers of the Japanese Grand Prix installed a large crane in place of the tractor that Bianchi hit.[10] 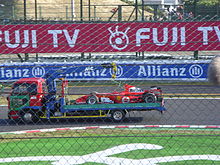 Suzuka was dropped from the Formula One calendar for the 2007 and 2008 seasons in favour of the Toyota-owned Fuji Speedway, after the latter underwent a transformation and redesign by circuit designer Hermann Tilke. Suzuka and Fuji were to alternate hosting the Japanese Grand Prix from 2009. However, after Fuji announced in July 2009 that it would no longer be part of the F1 calendar,[12][13] Suzuka signed a deal to host the Japanese Grand Prix in 2009, 2010 and 2011.[14]

NASCAR organized the NASCAR Thunder 100, a pair of exhibition 100-lap races on the east circuit, a 1.4 mi (2.3 km) layout which utilizes the pit straight and esses, before rejoining the main circuit near the Casio triangle. The cars were Sprint Cup Series and Camping World West Series cars and the field was by invitation for the two races, run after the 1996 and 1997 seasons. The 1996 event was marred by tragedy when during practice, pace car driver Elmo Langley died of a heart attack in the Chevrolet Corvette pace car at the esses during an evaluation run. The pole position speed was 83.079 mph (133.703 km/h).[16] During qualifying for the 1997 race, rain caused Goodyear to use rain tires on Winston Cup cars for the first time in the modern era. 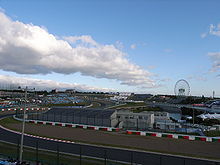 Track officials revised the 130R, redesigning it as a double-apex section, one with an 85 m (93 yd) radius, and then a second featuring a 340 m (370 yd) radius, leading to a much closer Casio triangle (chicane), with the chicane becoming a "bus stop" type for motorcycles.

The official lap record for the current circuit layout is 1:30.983, set by Lewis Hamilton during the 2019 Japanese Grand Prix. Previously, the record was set in 2005 by Kimi Räikkönen with a time of 1:31.540 (albeit on a marginally longer, slightly different variation of the circuit). The unofficial all-time track record is 1:27.064, set by Sebastian Vettel during final qualifying for the aforementioned 2019 race.

The official fastest race lap records at the Suzuka Circuit are listed as: 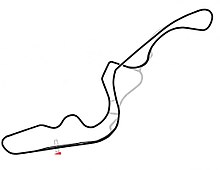